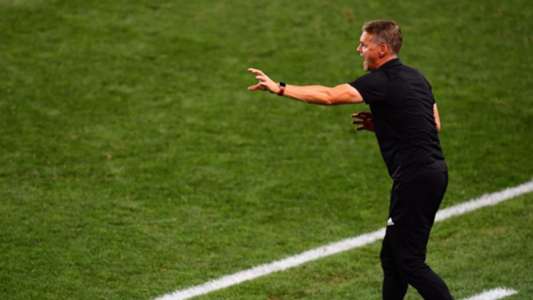 This comes after the Major League Soccer (MLS) side announced the appointment of Gerhard Struber as the club’s new manager on Tuesday.

Carnell had been serving as the club’s interim manager after the Metro dismissed Chris Armas early last month.

Red Bulls’ head of sport Kevin Thelwell explained why Struber has been brought in to take charge of the team after he left English Championship side Barnsley.

“Gerhard is a bright coach, and we’re very pleased to welcome him to the club,” Thelwell told the club’s official website.

“Gerhard’s playing style and experience in youth development align with our philosophy and above all, as a person, he fits into our culture.

“We look forward to him getting here and working together to achieve the goals we have set as a club.”

The former Kaizer Chiefs left-back watched on as Red Bulls succumbed to a 3-1 defeat to Orlando City in their most recent match on Saturday.

“We are really pleased with the process over the last month and are proud that our league’s policies are in line with our own when it comes to diversity in hiring,” he continued.

“We met and spent time with several great candidates of diverse backgrounds and experiences.

“The quality of the candidate pool further solidified our confidence in Gerhard as a top choice to lead our team.”

Thelwell went on to thank Carnell for leading the team well as the Metro look to qualify for this season’s MLS playoffs.

“I would also like to commend Bradley Carnell and the rest of the coaching staff for their leadership during the last month as we continue to work towards securing a playoff spot this season,” he concluded.

Red Bulls did not indicate whether Carnell will return to his former role as the club’s assistant manager.

He served as an assistant coach at Free State Stars and Orlando Pirates before moving to the Metro in March 2017.

sportsgamingwirehttps://sportsgamingwire.com
As an Editor and an Sports Geek, it's my pleasure to share my knowledge about Sports and their various aspects that can impact our lives.
Previous articleDon’t miss WWE’s Best Moments of 2020 this Sunday on FOX
Next articleSwitch’s Monster Hunter Rise Won’t Have Voice Chat, Which Isn’t A Shocker, But Still