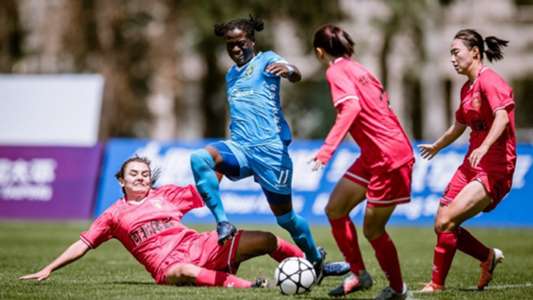 The Africans have been impressive in front of goal this term, with Zambia’s Banda scoring 17 goals in 11 outings on her debut campaign for Shanghai, while Chawinga managed seven in 10 games so far.

In September, Banda contributed an assist in Shanghai’s 3-0 victory over Chawinga’s Jiangsu in their first-ever meeting this season.

This time, Banda and Shanghai were seeking at least a draw to book their final spot after they had earlier accrued four points from a 4-3 win over Wuhan and a 2-2 draw with Beijing Phoenix.

On their part, Chawinga and holders Jiangsu were keen to avenge their initial defeat and inch closer to defending their Chinese crown after a 3-0 defeat to Wuhan before a recent 1-0 win over Beijing.

In Kunming, the champions made the brightest start to the match when Wang Xiaoxue drove the ball past her marker from the edge but fired straight into the arms of goalkeeper Ding Xuan in the 15th minute.

Three minutes later, Jiangsu came close to nick an opener when Dou Jiaxing latched on a cross from a corner but her effort went wide.

In the 27th minute, Chawinga sent in a brilliant cross from the left but Xu Yanlu’s header came off the crossbar before the Malawian’s strike was denied by the goalkeeper on the brink of half time.

After the restart, Shanghai looked fired up to steal the show as they almost broke the deadlock when Zhang Xin sent in another free-kick into the area but Wang Linlin failed to find the net in the 49th minute.

In the 70th minute, Shanghai were caught ball watching when Xu Yanlu provided a fine cross from the left and the onrushing Wu Chengshu accomplished a perfect finish to give the holders a shock lead.

Jiangsu almost doubled their lead when Chawinga raced into the area but instead of scoring decided to set up Yao Lingwei whose powerful strike came off the crossbar 14 minutes later.

However, Shanghai almost bounced back into the contest but her shot was stopped by the crossbar two minutes from time.

Despite the setback, Banda, who lasted the duration for Shanghai remains the topscorer with 17 goals in 12 matches, while Chawinga was in action from the start to finish in Jiangsu’s win.

The result means Jiangsu are through to the final after they finished second with six points from three matches, while Banda’s Shanghai ended in third with four points to qualify for the third-place fixture.

sportsgamingwirehttps://sportsgamingwire.com
As an Editor and an Sports Geek, it's my pleasure to share my knowledge about Sports and their various aspects that can impact our lives.
Previous articleF1 will soon be “the best it’s ever been”, says ex-Renault boss Bob Bell
Next articleInterMat Wrestling – Matside Recap: Who’s Number One

In the seven other...
Read more
Load more