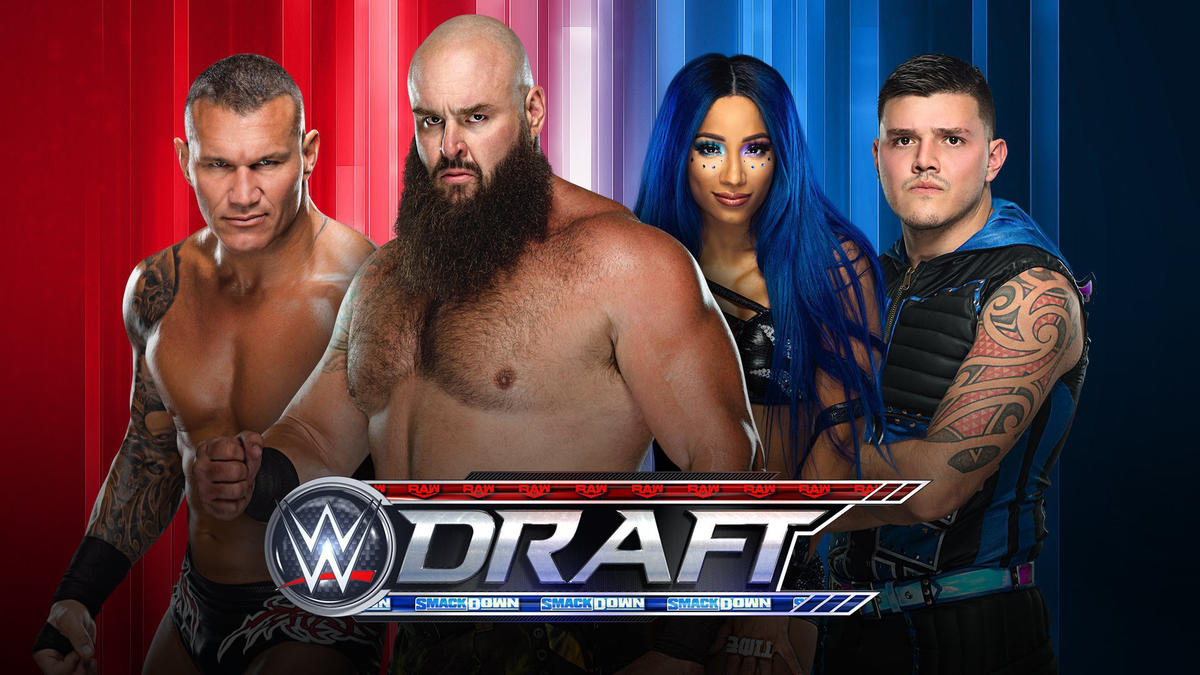 The 2020 WWE Draft is just hours away. You’ve filled out your mock drafts and built your perfect rosters. You’ve debated the best picks with your friends. Now, the time to shake things up is here.

Who will make the jump from Raw to SmackDown? Who will be sent from Friday night to Monday night? We’ll find out when the WWE Draft begins Friday at 8/7 C during SmackDown on FOX and continues Monday on Raw at 8/7 C on USA. Until then, the WWE.com staff has some ideas of moves that would make the 2020 WWE Draft unforgettable.

Randy Orton has left nearly everyone in his wake on Raw in 2020. Why not conquer SmackDown next?

Since joining the red brand in last year’s WWE Draft, The Viper’s list of victims doubles as a who’s who list: Edge, Christian, Big Show and Ric Flair, among others.

There’s just one piece of unfinished business: beating Drew McIntyre and becoming a 14-time World Champion. But after pinning him this past Monday, that may be exactly what’s in store at WWE Hell in a Cell.

Thus, Orton could find himself with the unique opportunity to take the WWE Title with him on a return to the blue brand, but now with a new, juicier list of potential casualties.

With the WWE Draft shifting the entire landscape of WWE, the possibilities on SmackDown seem endless, though they’d likely all end similarly: with the three most destructive letters in sports-entertainment. — JORDAN GARRETSON

What images come to mind when you think of Braun Strowman? Was it when The Strowman Express crashed full-speed into Bobby Lashley, sending both Superstars plummeting through the LED Screen to the concrete floor? How about when he chucked a gurney-bound Roman Reigns off of a loading dock? Single-handedly lifting an ambulance off the ground and flipping it over? Causing the ring to implode with an earth-shattering superplex to Big Show? Driving Kane through the canvas with a thunderous Running Powerslam? What do all of these awesome acts of destruction have in common? They all occurred on Raw.

To be fair, Strowman achieved enormous success on the blue brand when he won the Universal Title, but the championship reign came with a steep price: a twisted rivalry with “The Fiend” Bray Wyatt, wherein The Monster Among Men underwent an unsettling transformation. He needs to get as far away from The Fiend as possible, and it’s time for him to finish the job of conquering the red brand… and causing absolute mayhem along the way. — JON CHIK

Peyton Royce on SmackDown? That sounds 100 percent IICONIC. Ever since The IIconics disbanded on Raw, we’re still not over it. Peyton Royce has shown flashes of what she can do on her own as she defeated Billie Kay the following week on the red brand. No, we are “not joking you,” and a move to Fridays would give Peyton Royce the wings to see what else she can do without her life partner. We always knew Peyton was entertaining on the mic, but we never got to see how truly good she was one-on-one, without Billie Kay. It’s time for Peyton to make a name for herself, by herself. — DEBORAH WECKSELL

The Fiend to Raw

Bray Wyatt and his twisted counterpart “The Fiend” have run roughshod on Friday Night SmackDown since the 2019 WWE Draft, scarring psyches and inflicting physical torment on everyone who dares to cross their path, including Braun Strowman, Daniel Bryan and even John Cena. But as chaos reigns on the red brand – where RETRIBUTION have flourished, The Hurt Business have boomed, and Raw Underground has redefined WWE competition – the crimson lights of Monday nights are calling for a being that thrives on such wanton disorder. When it comes to the undeniable power of this three-time World Champion, Raw might have no choice but to “let him in.” — JAMES WORTMAN

Nearly a year ago at Survivor Series, we got a small taste of what Dominik Mysterio was capable of when he and his legendary father, Rey Mysterio, hit Brock Lesnar with an epic Double 619. Fast-forward to today, and we’ve seen the young prodigy truly become one of WWE’s breakout stars of 2020. So much so that it might be time for him to take the next big step and head to Friday Night SmackDown.

The Summer of Dominik has been incredible. He had his very first match EVER at SummerSlam in a Street Fight against one of the best WWE Superstars of this generation, Seth Rollins. Although he didn’t pick up the win, he impressed just about everybody and hasn’t stopped since. He continues to fight for his family’s honor every week on Raw, so what better way is there to make his family proud than to head to the blue brand and forge a path to individual success just like his father did upon his WWE arrival almost two decades ago? — STEVEN BARILE

Sheamus is not the flashy draft pick right now. Frankly, he’s underrated. That’s why he needs this move more than anyone else on this list.

This four-time World Champion and five-time Tag Team Champion has the pedigree to dominate both as a singles competitor and as a tag partner. It’s been nearly a year since The Celtic Warrior made his in-ring return, but despite Sheamus hitting as hard as ever, he hasn’t gotten hold of any WWE gold yet.

A move to Raw would offer Sheamus a fresh start and a new roster of Superstars to Brogue Kick into oblivion. He’s one of the most successful Superstars of the last decade, and he’s right at home in the World Title picture, so if he were to move to Raw, that would be the steal of the draft. — JEFF LABOON

Around this time last year, Aleister Black was looking for a fight. Between locals and high-profile Superstars, The Dutch Destroyer laid waste to many, etching a reputable name for himself under the bright lights of Monday Night Raw. But as his stock continued to soar, it wasn’t long before trouble engulfed the road ahead. Whether it was getting tossed off the roof during a wild and unconventional Money in the Bank Ladder Match or getting his eye grinded into the steel steps at the hands of a certain Disciple doing work for “the greater good,” something flipped inside the mind of Aleister Black, turning him into loose cannon. Having been put through the ringer on Raw, there’s no telling what could happen if this walking powder keg steps foot on SmackDown. At this livewire stage, Black is poised to leave a trail of devastation and intimidation on the blue brand. And with all this rage built up, it won’t be long before Friday nights… fade to black.  — RALPH BRISTOUT

The WWE Draft presents endless possibilities for WWE Superstars. For some, it’s the potential of new opportunities, others maybe a much-needed change of scenery. For Sasha Banks this year, it’s all about the chance to right wrongs.

The 2020 Draft does come with layers of complication for Banks, though. She is currently engulfed in her ultra-personal conflict with SmackDown Women’s Champion Bayley, which clearly takes precedence over everything else right now. But let’s be real, it’s manifest destiny that Banks and Bayley will firmly settle their differences at some point – no Draft or anything else can stop that from happening – but we also all know how Banks is wired. When she is ready to move on from Bayley (whether that’s this Friday night or some time much later), even if (or when) she has the SmackDown Women’s Championship over her shoulder, Sasha’s mind will immediately dart back to SummerSlam. It will dart back to the moment she lost the Raw Women’s Championship that night because Bayley interjected. It will then dart forward to the idea of needing to regain the Raw Women’s Championship to prove she is the best wrestler alive and right every last wrong she has suffered through.

So, Sasha Banks has to be drafted to Raw… because if there’s one thing a Boss hates, it’s unfinished business. — RYAN PAPPOLLA

sportsgamingwirehttps://sportsgamingwire.com
As an Editor and an Sports Geek, it's my pleasure to share my knowledge about Sports and their various aspects that can impact our lives.
Previous articlePICS: Swiatek to meet Kenin in French Open final
Next articlePirro fastest as factory test riders complete Portimao Test