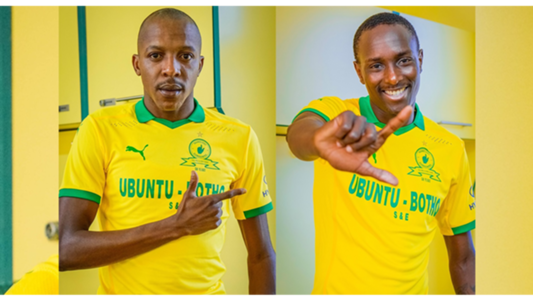 Newly signed Mamelodi Sundowns defender Khuliso Mudau has revealed why he feels joining the Tshwane giants is a good move for his career.

Mudau penned a five-year deal with the reigning PSL champions on Friday after the move became public knowledge earlier this week.

The lanky right-back said being part of a winning team is what he wanted as a player, and he’s already looking forward to helping the club win more trophies.

“I feel very happy to be part of Mamelodi Sundowns,” Mudau told the Sundowns media team upon his unveiling.  “This is a good move for me as a player to achieve more with the club.

“I think they have been doing very well as a club, collecting trophies. So, I think it’s a good move for me,” added the former Black Leopards man. “Yellow nation, I can’t wait to play for you on the pitch.”

Mudau, 25, has been brought in to increase competition in the Sundowns defence, and the utility man can also contribute in the centre of the midfield.

For Sundowns, the player will primarily compete with the likes of Thapelo Morena, Anele Ngcongca, Nicholus Lukhubeni and returnee Nyiko Mobbie.

Ngcongca’s future with Sundowns is hanging in the balance as reports emerged earlier this year that he could be set for a return to Belgium.

Morena only returned to action prior to the completion of the 2019-20 season after a long injury lay-off.

The inexperienced Lukhubeni was promoted to the first team not so long ago from the club’s youth structures.

This means Mudau stands a chance of featuring regularly for the Chloorkop-based side, but he’ll have to compete with Mobbie unless the technical team decide to loan him out again.

Mobbie spent last season on-loan at Stellenbosch and made 29 appearances as one of Steve Barker’s trusted men.

He’s now happy to be back at Sundowns

“I am happy to be back home and I am looking forward to working very hard. I can’t wait to make you proud,” he said.

Staying with Sundowns, rising star Promise Mkhuma has joined a new stable in the form of Prosport International, which looks after the interest of many top footballers in and outside the country.

The news of Mkhuma joining the established sports agency was confirmed on Saturday.

Mkhuma was promoted to the first team last season and played a role in Sundowns’ winning the treble.

We’d like to welcome @Masandawana footballer Promise Mkhuma to the Prosport International family. Promise is a winger who was the @Masandawana MDC Captain & was promoted to their first team. He has 8 caps for the SA U20 national team and played at the 2019 FIFA U20 World Cup ⚽ pic.twitter.com/9OLt1QxGuQ

sportsgamingwirehttps://sportsgamingwire.com
As an Editor and an Sports Geek, it's my pleasure to share my knowledge about Sports and their various aspects that can impact our lives.
Previous articleDucati double sees Mir miss out on Q1
Next articleThe best Sonic game is free to keep in Sega’s big birthday sale