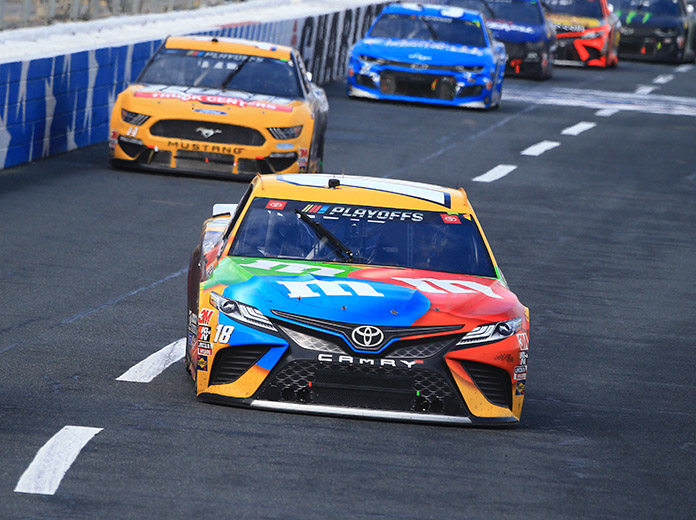 Busch stated after the Sept. 19 event at Bristol (Tenn.) Motor Speedway that he would be eliminated in the next round of the NASCAR Cup Series playoffs. On Sunday at Charlotte Motor Speedway, his prediction came true.

The reigning NASCAR Cup Series finished a frustrating 30th after running out of gas late in Sunday’s Bank of America ROVAL 400 on the Charlotte Motor Speedway ROVAL, which in many ways is a perfect summation of how difficult Busch’s season has been.

“Nothing has played out and been on our side,” Busch lamented after the race. “It’s just been unfortunate circumstances, a lot of bad luck. These guys on this M&M’s Camry team never give up and they fight all year long and every race and every lap, every pit stop as we can see. Man, just one of them off years. It’s been a terrible year for me.

“As other sports greats  would say, there’s many other drivers that would love to have a year that we’re having, but it’s just frustrating to know how good we are and what we’re capable of and being champions from last year to not come out here and be able to succeed and  be able to win. Fact of the matter, if we could win, we would be a heck of a lot better off. I knew this round was going to be trouble with the year we had. I was right.”

Busch entered Sunday’s race below the playoff cutline and winless this year. He wasn’t in a must-win position at the start of the race, but as the race wore on it became more and more obvious that his only shot to advance would be to win the race.

At one point during the race he cut down a tire during a restart, dropping him to the tail of the field. He worked his way back up through the pack, but at that point his only hope of advancing was winning. A pit strategy call that kept him on track while almost every other car in the field pitted late in the race gave Busch the lead, but with older tires on his Toyota he simply didn’t have the pace to retain the lead.

He eventually was forced to pit with two laps left in the race when his car ran out of gas, dropping him to his eventual 30th-place finish position while Chase Elliott won the race.

In a season where nothing has seemed to go right, it was just another moment of frustration for Busch.

“You come into a race like this and you throw a couple Hail Mary’s and they rarely work, especially when you don’t have the car,” Busch said. “That 9 (Chase Elliott) car is spectacular here and it was super fast. I followed him for a lot of laps trying to figure it out and he just gets smaller and smaller as he’s driving away.

“It’s not just this race. It’s a whole season and it’s a culmination of things that led to this and led to our elimination. We knew it coming into this round that this was going to be the hardest round for us to get through. Pretty much impossible and it was. We weren’t able to make up enough or get a win.

“We’ll just have to fight for a win here the rest of the year.”

sportsgamingwirehttps://sportsgamingwire.com
As an Editor and an Sports Geek, it's my pleasure to share my knowledge about Sports and their various aspects that can impact our lives.
Previous article‘Both teams were on the back foot too much’ – Santos disappointed by a lack of ‘explosiveness’ in France-Portugal draw
Next articleMcLaughlin’s gift to Dick Johnson