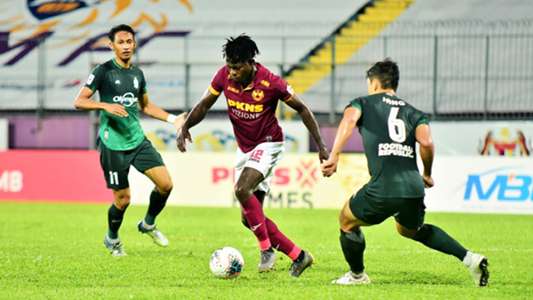 Selangor’s Ifedayo Olusegun has topped the Malaysia Super League goal-scoring chart thanks to his hattrick against Felda United on Saturday.

Playing against the struggling Felda United in their final Malaysia Super League matchday has not only allowed Selangor to record another commanding victory, it also afforded the Red Giants’ striker Ifedayo Olusegun the opportunity to top the league goal-scoring chart.

Going into round 11, the chart had been led by Perak‘s Shahrel Fikri who had 10 goals, while Ifedayo had been on nine. Against the Fighters, the Nigerian netted a hattrick to help his team win 6-1, to take his tally to 12, while Perak are scheduled to host second-placed Kedah on Sunday in a must-win match, on a night when claiming the golden boot is almost certainly not Shahrel’s top priority.

Speaking after the Felda encounter, the 29-year old forward paid tribute to his teammates, who assisted him in topping the chart.

“I am grateful to God and the team. I saw the chart and knew I was one goal behind a very fantastic Perak player. I kept that in mind as much as I wanted the team to finish the league campaign with a good win. I did my best and left the rest to God.

“Selangor have great players and it took me 30 minutes to immerse myself in the gameplay. I didn’t have to get down to get the ball myself often thanks to there being players who do that; I just needed to be near the box and look for chances. Thankfully I got my first goal in the first half, which then allowed me to calm down and score more,” said the player.

The former Melaka United and Felda player also took the time to praise his golden boot rival, whom he thinks is a great asset to the Malaysia national team.

“Shahrel Fikri is very fantastic; I saw some of his highlights, his positioning, goals, Malaysia should be happy there’s a local player who’s intelligent in front of the goal,” praised the Nigerian.

“To me, even if doesn’t win the golden boot, he should be recognised. It’s very impressive for a local player to come that far.”

But when asked by Goal whether Selangor, who have scored 16 goals in their last three matches alone, are now good enough to win the upcoming Malaysia Cup, he responded cautiously.

“This is my fourth year in Malaysian football. There’s something very different about Malaysia Cup that makes it hard to tell (predict the outcome). The big teams will defeat the presumably smaller teams in the league, but almost every team thinks they can win the cup, even Premier League teams.

“We played against PDRM, Felda and Melaka United [in 2019 Malaysia Cup] and those matches were tough, you know? Last year Perak beat us in the league but in the cup we won 3-1 in Shah Alam. This year it’s a knockout competition, so anything can happen. We can’t say we’re ready or we’re not, only ‘we’ll see’,” explained Ifedayo.