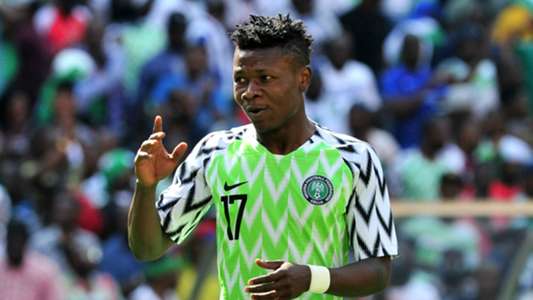 Bordeaux have confirmed Samuel Kalu has sustained hamstring injuries while on international duty, which rules him out of Saturday’s Ligue 1 clash with Olympique Marseille.

Kalu suffered his injury during Super Eagles’ 1-0 defeat to Algeria – which saw him substituted for Moses Simon in the 50th minute. He then missed Tuesday’s 1-1 draw against Tunisia.

The 23-year-old winger was among the goalscorers as Jean Gasset’s men silenced Dijon 3-0 at the Stade Matmut Atlantique before the international break.

Bordeaux have released an official statement confirming the winger’s damage to his left thigh ahead of their crunch fixture against Andre Villas-Boas’ squad.

“The Nigerian international winger was injured in the last game of the Super Eagles. Our player suffered a torn hamstring in his left thigh. His downtime will depend on the progress of the injury,” the French top-flight side wrote.

Gasset’s side must keep winning to stay within touch of Ligue 1 leaders Rennes, who currently hold a five-point lead at the top of the table.

Bordeaux can reduce the game to two if they win their game while hoping that Julien Stephan’s Red and Blacks who are unbeaten in their last five games stutter against Dijon inside Stade Gaston Gerard.

Kalu recently disclosed the efforts of Turkish Super Lig club Fenerbahce to secure his signature, however, he reiterated his commitment to the French elite division side.

“There is really nothing much to say because they [Fenerbahce] first gave an offer of a loan deal but Bordeaux rejected it, saying I was an important player to the club and they can’t allow me to go on loan again,” he told AOI.

“They came again with another offer for a loan and an option to buy at the end of the season but the club is yet to reply to them.

“I’m however ready to give my best to the club; if I will remain here I am 100% committed and won’t force a move away as it remains with the club to decide that.”

He was part of the Super Eagles team that finished third at the 2019 Africa Cup of Nations in Egypt and will be expected to play a key role for the West Africans as they hope to qualify for Cameroon 2022.

sportsgamingwirehttps://sportsgamingwire.com
As an Editor and an Sports Geek, it's my pleasure to share my knowledge about Sports and their various aspects that can impact our lives.
Previous article“It’s time to allow somebody else to have fun”
Next articleInterMat Wrestling – Tulsa, Kansas City, Philadelphia, Cleveland to host NCAAs

In the seven other...
Read more
Gaming