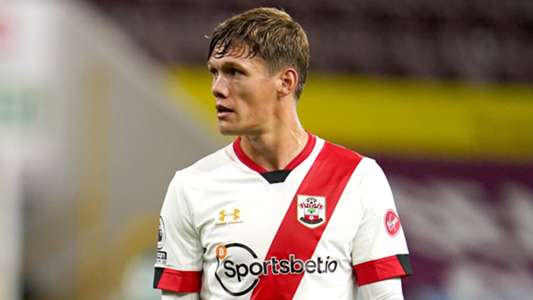 Denmark centre-back Jannik Vestergaard expects his side to give England a good test in Wednesday’s Nations League encounter between the two countries.

The Danes have four points from their three matches to date and sit third in League A Group 2 after a 3-0 win away to Iceland on Sunday, with Kasper Hjulmand’s side looking to cause an upset at Wembley.

Gareth Southgate will know not to take Wednesday’s opponents lightly following the scoreless draw between the two sides at the beginning of September in Copenhagen.

And Southampton defender Vestergaard, who is seeking to win his 19th cap, has predicted another tight affair, telling Goal: “England are great, but we are a good team as well, and we have just gone unbeaten as a team for almost four years and 34 internationals – until we lost to Belgium last month.

“We are a small country, and we are almost always underdogs coming up against the biggest countries like England, but we are a hardworking, tight group of players with good discipline.

“We are ambitious and we believe in ourselves and in our team, so we always stay focused and give everything in the 90 minutes. We fight for each other and play with respect but are never overwhelmed by the opponents.

“We have a unique kind of spirit, proven by our long unbeaten run. We know that we can be a tough team to play, difficult to beat and that we can hurt anybody.

“And our opponents have to respect us as well, like England did in the Parken Stadium last month with a very balanced and pretty careful tactical approach and line-up.

“We have a new national team manager in Kasper Hjulmand, who has some interesting ideas that we are implementing in our game right now – and which will help us grow as a team.”

Vestergaard plays alongside England internationals Danny Ings and James Ward-Prowse at Southampton, while he regularly comes up against some of the Three Lions’ best players in the Premier League.

“The quality of the group of players in the England squad is mind-blowing,” he said. “I know them all very well from the Premier League, and there is so much talent – and by the way also so many young talents – that you simply have to look at England as one of the favourites to become European champions next year.

“Ings got so close to the top scorer title of the Premier League last season. That is an amazing achievement playing for a team who were not in the top six. I am always madly impressed by his nose for goals – he can sniff them up out of nothing. He is an amazing player to have in your team – and a fantastic person as well.

“What an engine Ward-Prowse has got! It just never runs out of fuel during games – he is so hard-working for the team. His direct free-kicks are not matched by many – if by anyone – in the Premier League. Both are great guys, and I see them as more than team-mates – I see them as my friends.”

The in-form centre-back also reflected upon his decision to stay at Southampton in the summer transfer window despite reported interest from Tottenham, with Leicester City having also been keen on signing him.

“I wont lie and say that a move hasn’t been in my thoughts,” the 28-year-old admitted. “I came close in January, but the club and the manager told me that they wanted me to stay. And then I stayed.

“This summer there has been some contact from interesting clubs, for example in Spain, but only my agent knows the details – not me. I have been dedicated to the idea of continuing at Southampton, and I certainly feel that my manager believes in me and my qualities.

“I wanted to stay, just like other players chose to stay this summer, because we want to be a part of the great project going on here.

“I am sure that as a team – we’ve been together for a while now – we will build upon our great results especially after the corona break, and that our manager’s exciting system will only get better and better, the more automatised it gets.

“I strongly believe that we will develop and have a great season and finish higher in the table than in recent seasons.

“I had played around 200 games in the Bundesliga and I have some experience from the Danish national team as well as the Champions League and Europa League, but the intensity, the tempo, the physical challenges, and the sheer power of the Premier League is second to none. It is so competitive.

“I love the duality of playing in the Premier League: both the beauty of a completing a perfect pass up the pitch and in the primitive one-against-one duels with full physical power. Both the battle and the beauty.

“And I enjoy the passion in English football – and especially from our fans. The only minus is missing the fans because of corona. The Premier League is with no doubt the greatest league in the world.”

sportsgamingwirehttps://sportsgamingwire.com
As an Editor and an Sports Geek, it's my pleasure to share my knowledge about Sports and their various aspects that can impact our lives.
Previous articleRed Bull will address current car problems in next year’s RB16B
Next articleDAS not a “game-changer” for Mercedes at Nurburgring