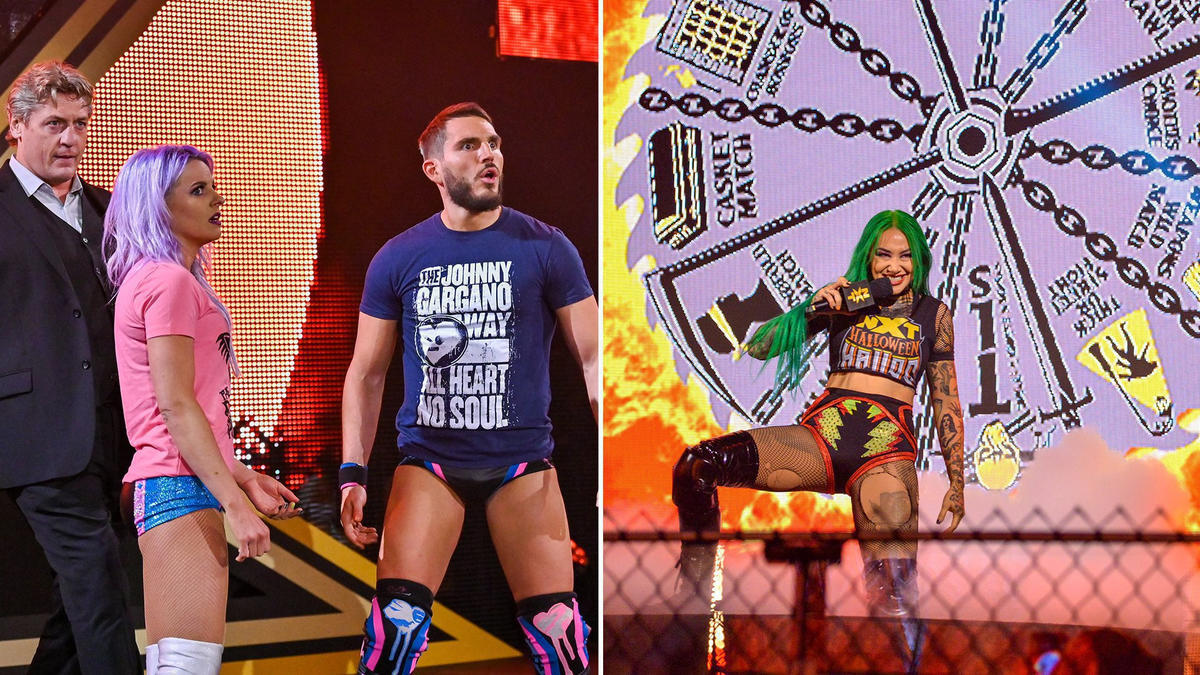 It’s been a turbulent few weeks for The Undisputed ERA, but Roderick Strong & Bobby Fish steered the most dominant faction in NXT history back on track. The UE prevailed after Strong connected with a massive running knee before they locked eyes with NXT Tag Team Champions Breezango, who were keeping a close eye on the bout.

Jake Atlas and Ashante “Thee” Adonis battled in a highly competitive bout, but Atlas one-upped his opponent when he caught him off-guard with a small package for the win. Afterward, they were ambushed by Legado del Fantasma, who retreated after Isaiah ‘Swerve” Scott arrived with steel chairs to even the odds.

“All Day” looks to leave a mark against one of the black-and-gold brand’s biggest stalwarts. Catch WWE action on WWE Network, FOX, USA Network, Sony India and more.

Johnny Gargano spent most of the bout putting the much younger Austin Theory through a squared-circle clinic, though “All Day” put up a strong effort to fight off Johnny Wrestling. Theory eventually succumbed after being planted with Gargano’s One Final Beat DDT, however.

Candice LeRae is the new No. 1 Contender to Io Shirai thanks in no small part to Indi Hartwell, who seems to be part of a budding alliance with The Poison Pixie. Shotzi Blackheart repeatedly demonstrated her resilience, even kicking out after LeRae connected on a picture-perfect Quebrada. But Blackheart had no answer after she was blasted by a brass knuckles-assisted right hand by LeRae, who was slipped the foreign object by Hartwell at ringside.

Toni Storm is back in a big way, returning to action with an impressive win over Aliyah. She put The Robert Stone Brand’s client down after hitting Storm Zero, looking better than ever in doing so.

Killian Dain & Drake Maverick are still anything but on the same page, and they were outsmarted in this one by the much more experienced team of Marcel Barthel & Fabian Aichner, with Maverick falling victim to the Imperial Implosion.

Ever-Rise sought to attack Maverick after losing to the unlikely duo last week, but Dain fought off their foes, rescuing his ill-fitting partner.

Damian Priest and Dexter Lumis’ unique clash of styles quickly progressed into a true heavyweight tussle with both men pulling out all the stops. The Tortured Artist hit a Uranage and locked in Silence on Priest — a move that few, if anyone escapes — but Priest wriggled away just enough for a rope break.

The Tortured Artist looks to make the most of his title opportunity against The Archer of Infamy. Catch WWE action on WWE Network, FOX, USA Network, Sony India and more.

Interference by Cameron Grimes spelled doom for Lumis, as The Technical Savage dropped him with the Cave-In, leaving him a sitting duck for South of Heaven and the pin by Priest. Afterward, Grimes was greeted with the Reckoning from Priest, though the North American Champion’s own celebration was cut short due to a steel chair attack by Johnny Gargano.

NXT General Manager William Regal announced Gargano would challenge Priest for his title at NXT Halloween Havoc, but that bout, as well as Candice LeRae’s contest against Io Shirai, would be contested under Spin The Wheel, Make The Deal rules, harkening back to Halloween Havocs of years’ past.

sportsgamingwirehttps://sportsgamingwire.com
As an Editor and an Sports Geek, it's my pleasure to share my knowledge about Sports and their various aspects that can impact our lives.
Previous articleTeofimo Lopez Jr. fights family expectations, taking on too much too soon against Vasiliy Lomachenko
Next article‘Too much going out, too many girls’ – Ex-France defender Rami admits love of food and partying held career back