Hazard will explode at Real Madrid in no time – Courtois 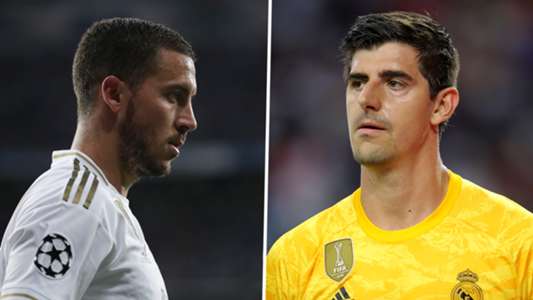 Hazard is yet to make an appearance for Madrid this season, having suffered a muscle injury just as he neared a return from an ankle issue.

The playmaker struggled to have much of an impact for the La Liga giants in his first season following his arrival from Chelsea last year.

But Belgium and Madrid team-mate Courtois believes it is only a matter of time before Hazard delivers at the Santiago Bernabeu.

“Hazard? I have no doubt, I am sure we will see the best Eden Hazard,” the goalkeeper told Cadena SER on Wednesday.

“He is the first with the desire to show it. I see him very well and hopefully soon he can prove it.

“Just before his injury, he played several games very well and there he had such bad luck and getting out of that was not easy. But now this month I saw him train very well. I am sure that in no time he will explode and will to give many joys to the team.”

Courtois arrived at Madrid from Chelsea in 2018 and also struggled initially, but he has turned his form around.

The 28-year-old paid tribute to coach Zinedine Zidane for continuing to back him.

“Zidane has given me a lot of confidence. I have always felt that he counted on me and it is important,” Courtois said.

“In those difficult moments at the beginning of last year, if you don’t feel that the coach is with you, it becomes difficult.”

Madrid, who are top of La Liga with 10 points from four games, host Cadiz on Saturday.

sportsgamingwirehttps://sportsgamingwire.com
As an Editor and an Sports Geek, it's my pleasure to share my knowledge about Sports and their various aspects that can impact our lives.
Previous articleRonaldo’s heartwarming message to Neymar after latest Brazil milestone
Next articleInterMat Wrestling – NCAA grants winter athletes additional season