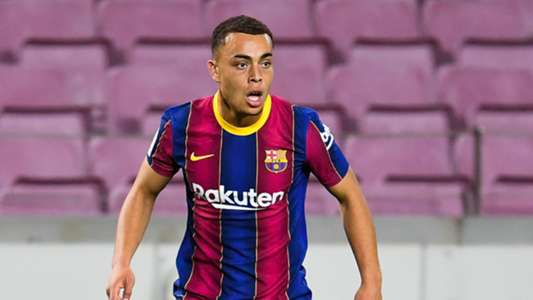 Barcelona head coach Ronald Koeman has said Sergino Dest could make his first start for the club in Saturday’s match against Getafe.

Dest joined Barcelona from Ajax earlier this month in a deal worth €21 million (£19m/$25m).

The U.S. national team full-back made his debut for Barca off the bench on October 4, coming on as a 75th-minute substitute for Jordi Alba in a 1–1 draw against Sevilla.

After becoming the first American to feature in an official match for the Catalan club with that appearance, the 20-year-old is now in line to make his first start with Alba yet to recover from a hamstring injury.

“First of all it was good to have him here for the training sessions,” Koeman said at a press conference on Friday. “We had the time to talk to him about the system of the team but that system is not really different to what he played with Ajax.

“We know he can play on the right side as a right full-back, he can play in the left full-back position. We know Alba is not fit for tomorrow, it’s a possibility that he will start tomorrow.”

With many Barcelona players away for international duty recently, Dest stayed with the club due to the USMNT not having any games scheduled. Koeman said that continuity could play to Dest’s advantage as he looks to adapt to his new side.

“It’s good for his adaptation that he was here and not playing for the national team,” the Dutch manager continued. “That makes it easier for the boy to adapt to all the kind of stuff we have in Barcelona because everything is bigger here than it was in Amsterdam for him.

“It’s good to have him because he’s one of the players who will be the future for this club.”

Though the full-back only recently joined Barcelona, Dest and Koeman have known each other for some time. During his time as Netherlands head coach, Koeman unsuccessfully attempted to convince Dest to commit his international future to the Dutch.

Though he rejected Koeman’s advances last year, Dest insisted earlier this week that there are no hard feelings between the pair.

sportsgamingwirehttps://sportsgamingwire.com
As an Editor and an Sports Geek, it's my pleasure to share my knowledge about Sports and their various aspects that can impact our lives.
Previous article205 Live Results: Oct. 16, 2020
Next articleFall Guys adds a Slime Survivors playlist