Noita review
A roguelike in which every pixel is simulated, causing the world to explode, collapse, burn, melt and so on in dynamic ways when touched by your wands and magic spells.

Fast and loose, or tight and controlled? That’s the question I ask myself at the start of any run in a game with permadeath – that is, a game that sends me back to the beginning upon death. On this particular life, am I going to try my hardest, and aim for deliberate progress toward a specific goal, or am I going to throw caution to the wind, leg it as fast and as far as I can, and see what I learn from the chaos?

When it comes to chaos, no game does it better than Noita.

Noita’s main brag is that “every pixel is simulated”. What this means is that the world around you isn’t constructed from immovable chunks, but individual pixels, and those pixels collapse and react as individual entities. This places a robust and logical simulation at the game’s core. Dirt tumbles, liquids slosh about. Oil floats to the top of water. Oil catches fire, releasing heat and smoke. Heat evaporates water, producing steam. Steam and smoke rise to the ceiling of caves, the steam condenses into water droplets, and drips back down to extinguish fires. Atop this core strides you, the player, the spark held to every match, setting off explosions and triggering floods and, if you fancy it, drinking from every pool of strange coloured liquid just to see what happens.

All this simulated glory gives Noita a toy-like quality, where a huge part of the fun is experimenting and seeing how the world reacts. It’s a Falling Sand game, all grown up.

It’s also a proper game, though. It’s difficult for me not to think of Noita in relation to the many other run-based games available, particularly Spelunky. Both are games about descending through progressively more difficult stages of a dungeon, with secrets, shops and abilities to gather along the way. The games bear little in common when it comes to the details, however.

For example, Spelunky is a game about physics, a bull fight against gravity that must be overcome via precision jumping, the conservation of ropes and the gathering of jetpack. Death most often comes because a force was applied to an object and the object collided with your head. In Noita, by comparison, gravity is your friend. There is no fall damage, you have a recharging jetpack by default, and gravity rushes you towards each level’s exit. Instead, it’s chemistry rather than physics that drives your empowerment and probable death.

Your main tools for your chemical experiments are the wands you find or buy inside the procedural dungeon, each of which has their own stats, can cast dozens of different spells, and can be edited to make interesting spells combinations.

Noita looks old fashioned in screenshots, but gloriously detailed and exciting in motion.

Tweaking these means moving powerful spells onto wands with faster recharge times, and combining those toxic slime trailers with modifiers that make them homing slimes, bouncy slimes, and more. I personally tend only to make cursory adjustments, in part because the interface for making the changes is slightly unclear about how it all works, and in part because I’ll likely die soon enough that it’s not worth investing a lot of time in a custom build. 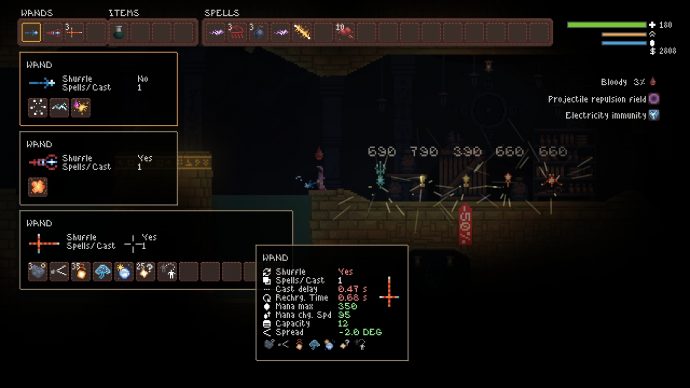 Every wand has its own unique stats, but the numbers are so granular that it can be intimidatingly fiddly to want to start tweaking them.

But here lies the breadth between tight control and freewheeling chaos. There’s no time limit to the game, and so you can spend as long as you like exploring each area, hoovering up items and carefully killing enemies for the gold they drop. You can drill deep into wandcrafting, compare recharge and mana stats, and construct the perfect build for each new challenge ahead.

Or, you can just run, and fall, and hit the level exit, snatch a new power from the holy temple, and dive deeper and deeper. Both, I think, are valid and rewarding methods of play. Best of all, they’re a salve to the game’s difficulty. Noita is a permadeath game where you will permadie a lot, and often from discovering a new wand and experimentally firing it just once. Yet it takes no time at all to start again, and the game will give you new, ridiculous powers within minutes, or even seconds, of each new life beginning.

For example, there is a method to have a guaranteed worm egg in your inventory within a minute of playing. When thrown, the egg will spawn a worm, sometimes small, sometimes enormous, but in either case capable of chewing through scenery and devouring enemies – and you. No matter how I die, I can’t stay mad at a game that guarantees I have that kind of toy to play with every time. 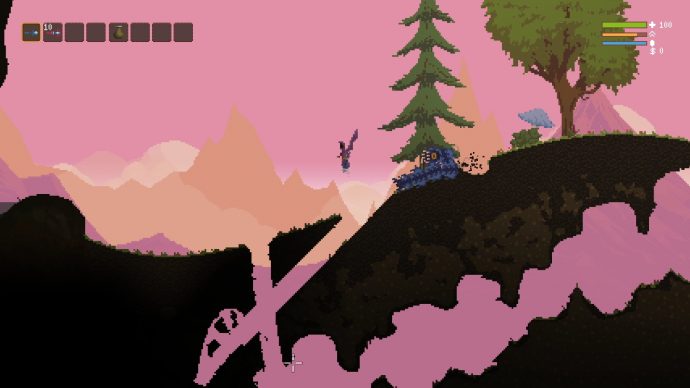 This is why I’ve spent dozens of hours playing Noita across its early access development, and why I’m still excited to play it more. Noita’s simulated pixels are a magic trick, but they allow its design to break the frame other modern roguelikes seem to exist within.

Noita constantly confounded my expectations. Its levels aren’t levels, for example. Each biome ends with a portal that whisks you to the holy mountain – an area where you can replenish health, shop for new wands or spells, grab a perk and then begin the next area – but these different areas exist within a single continuous world. The ability to destroy every pixel means you can tunnel between them, bypass the holy mountain or entire levels altogether. In some ways, it’s the ultimate homemade Worms level, the kind you might have made with friends in Deluxe Paint, where every player starts in an enclosed circle and must tunnel towards one another.

The world is also wider than it is tall. You can reach a new biome by heading down, but also by heading left or right. Noita is a kind of open world game, with enormous rewards for exploration.

I think this freedom negates a lot of the criticisms I might otherwise have of it. Noita is at its worst as a straight combat game, for one. Your default starting wand is relatively weak, and enemies will take two, three or more hits to die even on the first world. YYou need the gold they drop if you want to buy items at the holy mountain, and so you’re compelled to spend time carefully jetpacking and picking off spiders and slime monsters from a safe distance. It doesn’t feel great. It’s a little slow, a little tedious – and therefore all the more punishing when you die and start over with all your hard claimed progress gone.

But then, I don’t really need to play that way. If I’m committing to gathering gold, I can still explore until I find a more exciting wand, and then go back and burst the monsters afterwards. Or I can find the tools to turn any metal in the world into gold just by touching it. Or I can just find wands good enough that I don’t need to buy anything at all.

None of this changes that the combat is a little fiddly: too fast-paced to be thoughtful, too much about slow-moving projectiles to be as urgent and gratifying as, say, Soldat. It does mean that it never feels like a problem, to me. I can choose how I engage with any of its systems, from “not at all” to “at painstaking length” to “does turning it to dust count as ‘engaging’?”.

Early access has also given its developers time to add different modes of play. If the regular adventure mode keeps killing you before you see anything good, there is a daily challenge which lightly randomises your starting items, and a practice mode that spawns you at a random position in the world with a full and randomly selected inventory. These are great ways to see new things quickly with varying levels of integrity behind the challenge.

I feel as if I’ve spent a lot of this review in description mode, yet barely skimmed the surface of Noita’s great breadth. I’ve hardly mentioned the enemies, which run the gamut from “fire wasp” to “sniper” to “Cthulhuian horror”, and swirl around the great chemical system in exciting ways. I like the green slime monsters who leak when shot, like a water balloon filled with CBBC gunge. I love their mother even more, who is four times as large and huffs cavern-filling explosive gas.

There are also potions. There are great alchemical secrets. There are stone tablets I still don’t fully understand, phenomenal powers that completely change the flow of the game, and boss monsters I’ve never even seen. There’s a whole food system I don’t quite understand, except that you can drink a jug of ambrosia and then vomit everywhere.

All of which, vomit included, will keep me playing for a long time to come. It’s rare that a developer is able to wrestle this kind of ambitious technical witchery into the shape of an actual game, but Noita pulls it off. Fast and loose, or tight and controlled? It doesn’t matter, I’m having fun either way.

sportsgamingwirehttps://sportsgamingwire.com
As an Editor and an Sports Geek, it's my pleasure to share my knowledge about Sports and their various aspects that can impact our lives.
Previous articleThe Ultimate Marvel’s Spider-Man: Miles Morales Story Primer
Next articleThis Fallout New Vegas Horror Mod Brings Hell On Earth, Heavily Inspired By Silent Hill