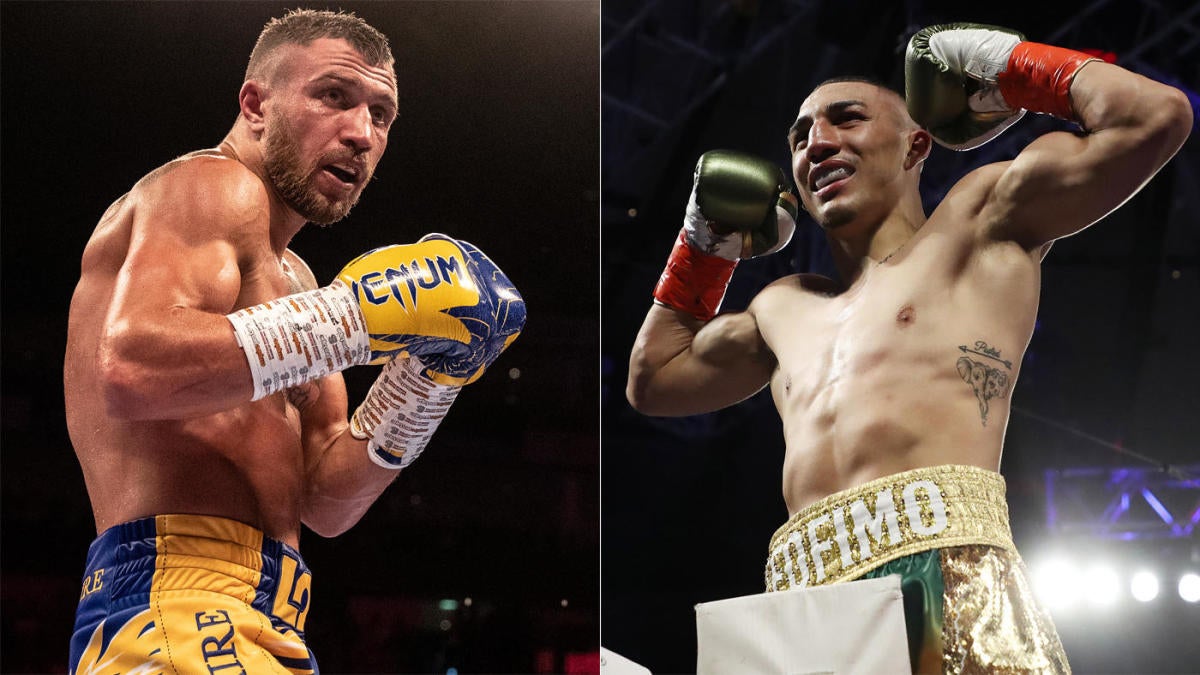 With the time to talk behind us regarding the bad blood between lightweight champions Vasiliy Lomachenko and Teofimo Lopez Jr. (and their respective father/trainers), the focus turns to the matchup itself entering Saturday’s must-see clash to crown an undisputed champion at 135 pounds.

Lomachenko (14-1, 10 KOs) for one is excited about that fact as he brings his trio of world lightweight titles (WBA, WBO, WBC) to face off against Lopez’s IBF crown inside the MGM Grand Conference Center in Las Vegas (ESPN, 10 p.m. ET) following nearly an entire year of insults slung between them.

“I feel great and I’m saving my emotions for Saturday night,” Lomachenko said during an interview with CBS Sports’ “Morning Kombat” on Thursday. “[Lopez and his father] are lying, they are thinking. I don’t care. After this fight, I forget about Teofimo and his family.”

A three-division champion, the 32-year-old Lomachenko enters with far more experience than Lopez (15-0, 12 KOs), who is just 23, despite the fact that both have just 15 pro fights apiece. Lomachenko’s extensive amateur background is a big part of that, having won two Olympic gold medals for his native Ukraine.

While Lomachenko will undoubtedly bring advantages in everything from experience to footwork, speed and technique, the major question that needs answering regarding what this fight will actually look like centers around whether he can handle Lopez’s explosive power and unpredictable style.

“We have to wait and see. I give every fighter things that I want them to feel,” Lopez told CBS Sports on Monday. “I have to see what he can and can’t handle. We will go off of that. I don’t underestimate no fighter and no man. We don’t know. That’s what everybody is waiting for, just to see. We have all seen what Loma can do but nobody has really seen all that I can. I can’t wait to showcase that. It’s going to be a very entertaining fight but very technical as well.”

Lomachenko will look to make his fourth lightweight title defense while becoming the first fighter in the four-belt era to gain status as an undisputed champion at 135 pounds. Lopez, meanwhile, will look to prove that his early knockout over Richard Commey last December to claim his first world title was anything but a fluke.

Stoic as ever, Lomachenko wasn’t quick to dish out respect for his opponent’s ability.

“I am never thinking about respect to fighters. I never think,” Lomachenko said. “He is a good boxer, he is a champion of the IBF and, of course, I respect him because he is bringing on Saturday my red belt. That’s why I respect him.”

Brookhouse: There’s not a lot of middle ground on this fight. Lopez is not going to win on the scorecards. If the fight goes the full 12, Lomachenko will almost certainly have a commanding lead. That’s no knock on Lopez, but Lomachenko is a uniquely great talent in the current boxing landscape. Lopez does have a clear path to victory, however, and it’s all about proving that lightweight is too big for Lomachenko — or, at the very least, Lopez’s punches are too big for him. We’ve seen Lomachenko get hurt at lightweight, even if he has come back to clearly win every fight at 135 pounds. But Lopez throws from odd angles and hits much harder than Jorge Linares or Luke Campbell. Common sense says the most likely outcomes of the fight all feature Lomachenko winning by wide decision or late stoppage, even as Lopez gives a fine account of himself, but I’m riding with the guy who only needs to land one shot to turn the boxing world on its head. Pick: Lopez via TKO5

Campbell: The most interesting aspect of handicapping this fight — and the element that makes it the hardest to be sure what exactly will happen — is the fact that both fighters possess largely unorthodox styles that have given more traditional boxer-punchers consistent fits.

Lomachenko, a southpaw, is a defensive wizard with unmatched foot speed and intelligence, who is able to score with impactful punches from awkward angles without taking much damage in return. Lopez is more of a freak athlete in the mold of a Roy Jones Jr., who leaps in with devastating counter shots and never allows his opponents to feel safe thanks to the sudden burst of his offensive attack.

Exactly how these two styles will match up and which man will settle in to any traditional roles like pace setter, aggressor or counterpuncher remains unknown although it’s more likely that Lomachenko will be the busier fighter of the two.

Although Lopez, in theory, should remain dangerous throughout thanks to the threat of his power, his lack of a resume at this level could become a budding storyline to keep track of provided he is unable to land anything hard and clean in the early going. Lomachenko has a history of frustrating opponents by not staying in one place for too long, which led to four straight fighters quitting on their stool — mostly out of frustration — during his run as a 130-pound champion.

Not only will Lopez need to show a tremendous amount of poise beyond his age, he’s also going to need to establish a jab to avoid falling behind on the scorecards should he prove unable to land a statement punch in the opening rounds.

Yet even though Lopez enters as the rightful 3-1 underdog given Lomachenko’s pedigree and experience level, the combination of his power and athleticism simply can’t be overlooked. Although more traditional fighters have had trouble timing Lomachenko’s frenetic footwork patterns, Lopez possesses as great a chance as any opponent before him to challenge whether moving up to lightweight was a bridge too far for Lomachenko.

He might be 4-0 since arriving on the 135-pound scene in 2018, but Lomachenko has shown some of his first flashes of being human at lightweight, which is admittedly one-to-two divisions above his optimum weight. Jorge Linares floored Lomachenko with a counter right hand and both Jose Pedraza and Luke Campbell enjoyed moments of success as the naturally bigger fighters during their competitive unification defeats.

Lopez brings far more power than any of Lomachenko’s 135-pound foes but simply can’t rely on the idea that it’s one big punch or bust should he hope to find success in this fight. That’s because there simply isn’t another fighter who can emulate Lomachenko’s mastery inside the gym.

If Lopez is unable to show early on that he can make championship adjustments and figure out a way to compete with Lomachenko in terms of his boxing ability, the threat of his punching power and the hopes of a one-punch knockout will dim each round. Pick: Lomachenko via UD12

sportsgamingwirehttps://sportsgamingwire.com
As an Editor and an Sports Geek, it's my pleasure to share my knowledge about Sports and their various aspects that can impact our lives.
Previous articleWimbledon plans return in 2021, with or without fans
Next articleGeorgia Tech looks to follow Roman Reigns’ lead and “Wreck Everyone and Leave”

Where to watch the boxing this weekend

Boxing on the box - Channel 5 will...
Read more
Boxing

Bobby Czyz was on the crest of a...
Read more
Load more