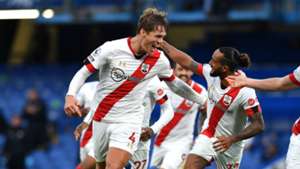 Chelsea’s defensive lapses remain a problem, and Southampton punished their main weakness in a six-goal thriller at Stamford Bridge.

Theo Walcott marked his first Southampton appearance for almost 15 years by setting up the late equaliser that secured a dramatic 3-3 draw against Chelsea at Stamford Bridge.

German stars Timo Werner and Kai Havertz scored their first Premier League goals for Chelsea, but there were familiar failings in the home team’s ranks and Frank Lampard’s men were punished.

Chelsea were thrilling going forward at times, with Werner, who also had a goal disallowed, netting twice before setting up Havertz for what looked set to be the winner.

But between Werner’s double and Havertz’s strike it had been the same story for the Blues’ defence, with Danny Ings and Che Adams taking advantage, and Walcott’s shot from the edge of the penalty area in stoppage time was nodded in by Jannik Vestergaard to pinch a point.

What a game. What a point. pic.twitter.com/fpPWlh1V4S

sportsgamingwirehttps://sportsgamingwire.com
As an Editor and an Sports Geek, it's my pleasure to share my knowledge about Sports and their various aspects that can impact our lives.
Previous articleAleix Espargaro explains qualifying collision with brother Pol
Next articleBourne dominates Brands Hatch ahead of late podium drama

The Bosnian led the Kawangware club back...
Read more
Soccer

Shakhtar Donetsk stunned the Spanish side on...
Read more
Gaming

For what my money's worth, the new Doom...
Read more
Load more