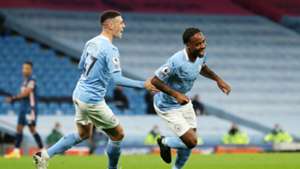 After taking one point from games against Leicester and Leeds, Manchester City needed a win against Arsenal and Raheem Sterling delivered.

Raheem Sterling’s fourth goal in his past three games got Manchester City back to winning ways in the Premier League with a 1-0 victory over Arsenal.

Sterling sat out England‘s games against Wales, Belgium and Denmark with a hamstring niggle but was back in action to score decisively midway through the first half at the Etihad Stadium.

But Guardiola’s side held on for a timely triumph after taking a solitary point from encounters with Leicester City and Leeds United before the international break.

Riyad Mahrez, stationed on the right of a fluid City attack, was prominently involved in the opening exchanges – firing wide inside the opening minute before digging out a cross for the returning Sergio Aguero to head over.

The former Leicester City favourite’s astute in-field pass released Aguero to run at the Arsenal defence in the 23rd minute, with Phil Foden’s resulting shot saved by Bernd Leno and tucked home on the rebound by Sterling.

Who else but @sterling7?

Bukayo Saka danced through the City backline to force a stop from Ederson as Arsenal sought a swift response, although Leno had to be alert to thwart Mahrez at his near post before the half hour and denied Foden after his defence played into trouble.

It was a game to busy both goalkeepers, with Ederson springing into action when Saka and then Pierre-Emerick Aubameyang burst into the City box.

Guardiola sent on Ilkay Gundogan, returning after a positive coronavirus test, in place of Aguero in an attempt to shore up midfield with Arsenal in the ascendancy after the break.

Nevertheless, free-kicks from David Luiz and Nicolas Pepe that did not trouble Ederson were the closest they came.

On an increasingly rare foray forward, City wing-back Joao Cancelo almost forced David Luiz to prod into his own net. In the end, Sterling’s solitary strike would prove enough.

sportsgamingwirehttps://sportsgamingwire.com
As an Editor and an Sports Geek, it's my pleasure to share my knowledge about Sports and their various aspects that can impact our lives.
Previous articleAnthony Macri Is Finding His Way
Next articleFP4 race pace analysis from Aragon

The Bosnian led the Kawangware club back...
Read more
Soccer

Shakhtar Donetsk stunned the Spanish side on...
Read more
Gaming

For what my money's worth, the new Doom...
Read more
Load more