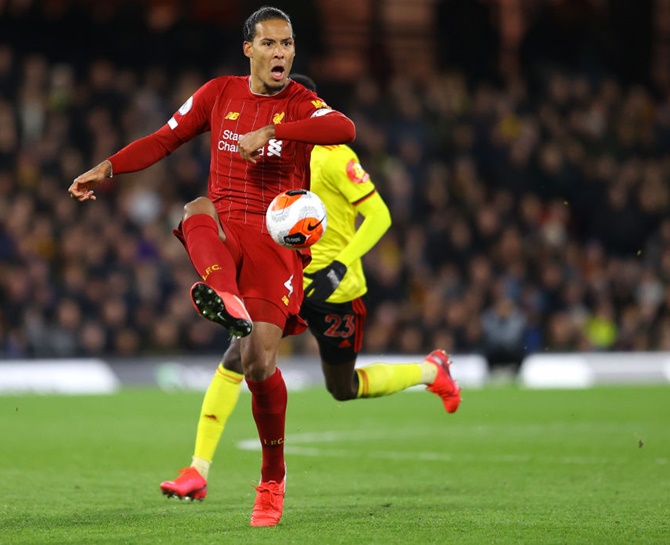 Liverpool have been a dealt a huge blow with news that centre back Virgil van Dijk needs surgery on damaged knee ligaments sustained in Saturday’s Merseyside derby draw against Everton.

The Premier League champions confirmed on Sunday that the Dutchman, ever-present in the league for the last two seasons, would need an operation, although they did not say how long he would likely be missing.

Van Dijk was substituted early in the game when Everton goalkeeper Jordan Pickford made a reckless challenge in the box, which left Liverpool manager Juergen Klopp fuming.

“Liverpool can confirm Virgil van Dijk will undergo surgery on the knee injury he sustained during Saturday’s 2-2 draw at Everton,” the club said in a statement.

Van Dijk has reportedly damaged cruciate ligaments, an injury that normally requires months of recovery, potentially ruling him out for the rest of the season while also dealing a blow to the Netherlands ahead of the Euros next year.

“If you asked me at the start of the season who is the one player Liverpool don’t want to be missing for a chunk of the season, for me it would be Van Dijk,” former Liverpool midfielder Graeme Souness told Sky Sports.

“He is the catalyst for everything they do. It’s a major blow and the last thing they needed.”

Van Dijk took to Twitter and wrote: “This afternoon I met with a leading consultant to start the process of planning the finer details of my rehabilitation following the incident yesterday. I’m now fully focused on my recovery and will do everything I can to be back as quickly as possible. Despite the obvious disappointment, I’m a firm believer that within difficulty lies opportunity and with God’s help I’m going to make sure I return better, fitter, and stronger than ever before.”

“In football, as in life, I believe everything happens for a reason and it’s important to try and keep level-headed whether going through the highs or the lows. With the support of my wife, kids, family, and everyone at Liverpool, I’m ready for the challenge ahead,” he added.

The player, in the post, further stated: “I’d like to thank everyone for the messages of support. It’s meant a huge amount to me and my family, and now I’ll be doing everything possible to support my teammates in any way I can ahead of a big few weeks ahead as I take my own recovery day by day. I’ll be back.”

Liverpool said no specific timescale is being placed upon his return to action at this stage.

Reigning league champions Liverpool are third in the standings after five games, three points behind Everton.

Van Dijk was bought for 75 million pounds — a club-record signing — and has played 50 games in each of the last two seasons for Liverpool.

days before next month’s international break.

Liverpool begin their Champions League group stage campaign at Ajax Amsterdam on Wednesday and Van Dijk’s absence leaves another hole at the back with goalkeeper Alisson Becker also sidelined with injury.

Manchester City manager Pep Guardiola says Sergio Aguero can still play an important role for the club after returning from a serious knee injury but the Argentine striker has to show he can deliver on the pitch if he is to earn a new contract.

Aguero, who joined City in 2011 and is their all-time leading scorer with 254 goals, is out of contract at the end of the season and can speak to overseas clubs from January.

The 32-year-old sustained the injury in June and made his return in Saturday’s 1-0 home win over Arsenal.

“Sergio now has to show, like every one of us, that he deserves to continue here — keep playing well, scoring goals and winning games — and after that the club and I will decide,” Guardiola told British media.

“But if he’s playing in his level we don’t have any doubts that he’s a player to stay until he decides because he’s unique. He’s important for us, our fans and everyone.”

“But he was out four months and he has to start training regularly and start to score goals. Having Aguero on the pitch, we’re better, safer. We missed him in the important moments at the end part of last season.”

City, who are 10th in the Premier League with seven points from four matches, begin their Champions League campaign on Wednesday against Porto before a league meeting with West Ham United at the weekend.

Schalke 04 on Sunday apologised to 15-year-old Borussia Dortmund player Youssoufa Moukoko after their fans hurled abuse at the teenager following his hat-trick in the Under-19 Ruhr derby.

“We can only apologise to Youssoufa Moukoko for what fans shouted during the Under-19 game,” Schalke said on Twitter. “Putting emotions of a derby aside, we fully condemn such insults and reject them.”

“We will take the necessary measures together with the Schalke fan department.”

The Cameroon-born Moukoko, considered one of the biggest talents in Germany, scored all the goals in their 3-2 win over Schalke on Sunday, with a few fans shouting insults at the teenager, who ignored them.

Moukoko is eligible to compete in the Bundesliga after he turns 16 in November.

Wayne Rooney was “angry and disappointed” with a friend who had visited him despite being told to take a COVID-19 test and later testing positive, the former England captain’s management said.

Rooney, a player-coach at Championship side Derby County, played in Derby’s 1-0 home defeat by Watford on Friday, a day after the friend visited him at his home.

Under NHS guidelines anyone coming in contact with someone who tests positive for COVID-19 must isolate for 14 days.

“Wayne is angry and disappointed that he, his family and his club have been put in this position by someone acting secretly and in breach of government and NHS guidelines,” Rooney’s management said in a statement to British media, adding that he would take a COVID-19 test.

Derby said in a statement, without naming Rooney, that they were aware of the incident and that appropriate measures were taken in line with strict English Football League COVID-19 protocols and government guidelines.

sportsgamingwirehttps://sportsgamingwire.com
As an Editor and an Sports Geek, it's my pleasure to share my knowledge about Sports and their various aspects that can impact our lives.
Previous articleZverev dominates Auger-Aliassime to win indoor title in Cologne
Next articlePIX: Villa maintain perfect start; Schalke end losing run