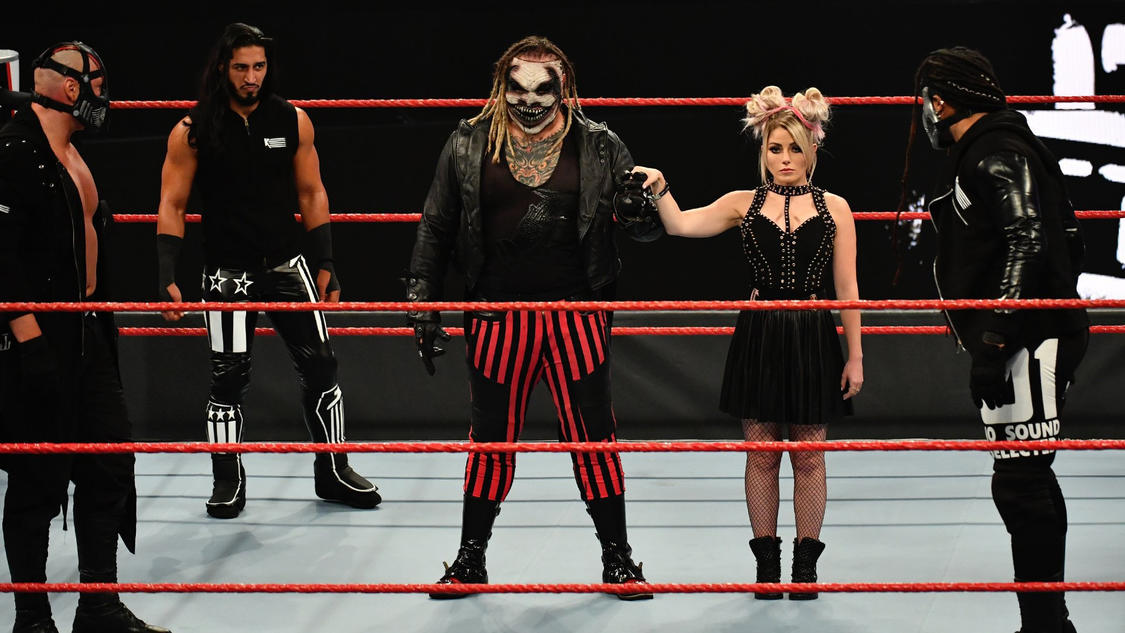 Alexa Bliss introduces the red brand to the sinister entity known as The Fiend, only for RETRIBUTION to crash the haunting arrival. Catch WWE action on WWE Network, FOX, USA Network, Sony India and more.

The season premiere of Monday Night Raw began with a bone-chilling moment, as Alexa Bliss arrived with a warning: “He’s here.”

With those words, The Fiend stalked his way to the ring inside the WWE ThunderDome and took Bliss by the hand. But the group known as RETRIBUTION charged the ring and surrounded the squared circle. Just as Mustafa Ali was about to unleash his crew, the lights went out in the WWE ThunderDome, and The Fiend & Bliss disappeared.

The Hurt Business and RETRIBUTION clash in a huge Eight-Man Tag Team battle, but both factions may have something more frightening to worry about. Catch WWE action on WWE Network, FOX, USA Network, Sony India and more.

RETRIBUTION’s night was just beginning, though, as The Hurt Business arrived for their Eight-Man Tag Team Match.

United States Champion Bobby Lashley was on fire from the opening bell, as he steamrolled T-BAR and SLAPJACK. But RETRIBUTION would not be kept down, as Mustafa Ali pummeled Cedric Alexander. Lashley cinched in the Hurt Lock on T-BAR, who tapped out to give The Hurt Business the victory.

But as soon as the bell rang, both factions learned that something more malevolent is waiting in the wings. The lights were cut out once again, and when they came back on, The Fiend was there. The Fiend bulldozed through most of RETRIBUTION, as Ali escaped after T-BAR went after the terrifying Superstar.

When he was through with RETRIBUTION, The Fiend turned his attention to The Hurt Business, perhaps letting them – and the rest of Raw – know that this is his playground now.

The Phenomenal One has a towering associate with him for a battle against The Original Bro. Catch WWE action on WWE Network, FOX, USA Network, Sony India and more.

The Phenomenal One arrived for his battle with Matt Riddle with a surprising equalizer, as the towering individual previously seen as the bouncer for Raw Underground accompanied him to the ring. This massive human being initially refused to leave the ring as the referee begged him to, so the match could start.

In a back-and-forth-battle, Riddle was looking to regroup on the arena floor, but he instead found himself staring down Styles’ humongous associate. As the giant balled up his fist, Riddle darted back into the ring, but he ran right into a kick from Styles, setting up the Styles Clash to give The Phenomenal One the win.

Can The Ravishing Russian pull off the upset and dethrone The Empress of Tomorrow? Catch WWE action on WWE Network, FOX, USA Network, Sony India and more.

The Ravishing Russian had a tall task ahead of her in the form of Raw Women’s Champion Asuka. And while Lana showed she was not afraid of The Empress of Tomorrow, going after the champion with a series of kicks and strikes, it was not long before she was trapped in the Asuka Lock with no choice but to submit.

But as soon as the bell rang, WWE Women’s Tag Team Champions Nia Jax & Shayna Baszler arrived to ambush The Empress of Tomorrow. The Irresistible Force snatched Lana, and for the fifth consecutive week, drove her through a table with a Samoan Drop. However, the Raw Women’s Champion was able to fight off The Queen of Spades and escape before any more damage could be done.

Following their attack on Asuka and Lana, the WWE Women’s Tag Team Champions called out anyone daring enough to take them on. They were taken up on the offer by Mandy Rose & Dana Brooke, The Riott Squad and the new pairing of Peyton Royce & Lacey Evans.

In a fast-paced battle that could not be contained by the ring, the champions showed why they hold those titles, despite their many differences. Baszler took Ruby Riott out with the Kirifuda Clutch as Jax dropped Evans with a Samoan Drop to earn the victory.

One week before the release of his latest album, “Universal Truth,” Elias gave the WWE Universe a preview of two songs – “Amen (I’m Going In)” and “Lead Me Home.”

After tearing it up inside the WWE ThunderDome, Elias attempted to give the WWE Universe an encore. However, a mysterious guitar player grabbed ahold of Elias’ guitar to play a solo of his own. When Elias, furious at being shown up at his own concert, spun the guitarist around, he was revealed to be Jeff Hardy. The Charismatic Enigma took a swing at Elias with the electric guitar, then told Elias he had nothing to do with the car that hit him several months ago. After the abrupt end to his concert, Elias challenged Hardy to a match this Sunday at WWE Hell in a Cell.

Despite being split from Big E in the WWE Draft, Raw Tag Team Champions Kofi Kingston & Xavier Woods are looking to spread seeds of positivity throughout the WWE Universe, much to the chagrin of Sheamus.

Once the bell rang, The Celtic Warrior sought to beat any positivity out of Kingston. But with Big E watching among the WWE ThunderDome crowd, Kingston fought back and clobbered Sheamus with Trouble in Paradise to get the three-count.

The Miz & John Morrison mocked Tucker when he issued a challenge for a tag team battle. They weren’t expecting Tucker to scour the globe (digitally) to find a partner: El Gran Gordo, one of the world’s premier luchadores!

While El Gran Gordo may bear a passing resemblance to Tucker’s former tag team partner, Otis, the masked man showed off his supreme lucha libre skills, including a dazzling arm drag off the ropes and a devastating splash that crushed The A-Lister and gave his team the victory.

The Limitless One squares off with The Monster in a clash of Raw titans. Catch WWE action on WWE Network, FOX, USA Network, Sony India and more.

Braun Strowman was showing the effects of his Universal Championship battle with Roman Reigns, but that did not stop The Strowman Express from charging into Raw for a battle with Keith Lee. But not being at 100 percent put The Monster at a disadvantage against the Limitless One.

So, Strowman went below the belt, hitting Lee with a low blow that the referee could not see, which allowed him to connect with a big boot to get the win. But Strowman’s actions sent Lee into a rage, and The Limitless One responded with a low blow of his own, letting Strowman know that this was far from over.

Drew McIntyre confronted Randy Orton inside Hell in a Cell

The WWE Champion gives Randy Orton a preview of what lies ahead when they meet inside Hell in a Cell. Catch WWE action on WWE Network, FOX, USA Network, Sony India and more.

With just six nights left before his WWE Championship Hell in a Cell showdown against Drew McIntyre, Randy Orton entered the career-altering structure to send a “message from hell” to The King of Claymore Country. The Viper believes that for all of his previous battles inside Hell in a Cell, and for the Cell’s horrific reputation, he has not been changed at all.

It wasn’t long before McIntyre arrived, looking to give Orton a preview of their battle this Sunday. But Orton had the cage locked and chained shut. Luckily, the WWE Champion had bolt cutters stashed nearby to break the chains and get inside the Cell as Raw went off the air.

sportsgamingwirehttps://sportsgamingwire.com
As an Editor and an Sports Geek, it's my pleasure to share my knowledge about Sports and their various aspects that can impact our lives.
Previous articleRussian hackers attacked 2018 Winter Games: US indictment
Next article‘Gopichand didn’t take interest in Sindhu’s training’