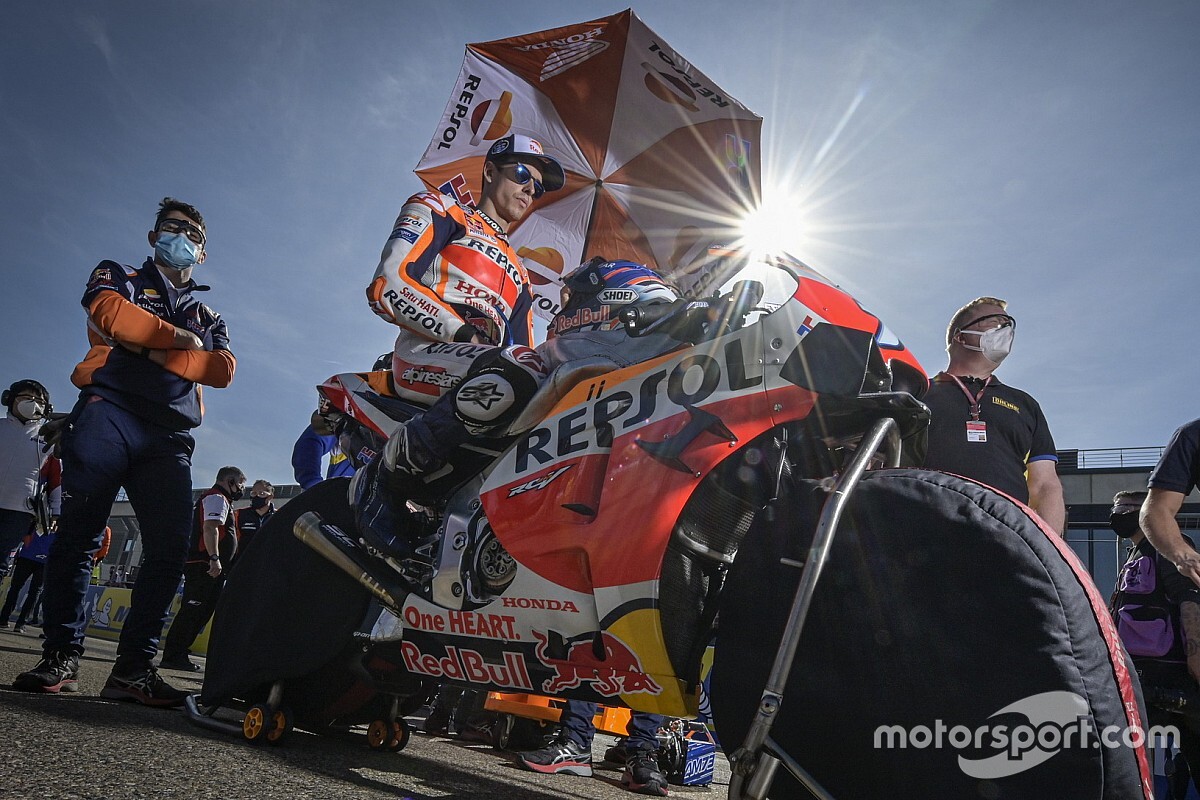 The 2020 RC213V has proven to be a tougher motorcycle than its predecessor, with its turning characteristics, and the way it enters corners, coming in for criticism from its riders this year.

Prior to the French GP, no Honda rider had scored a podium, though rookie Marquez now has two to his credit after his stunning ride to second from 11th in the dry at the Aragon Grand Prix. Honda has made steps forward with the bike since the Misano test in September, with HRC working more with the new Ohlins rear suspension, as well as a new chassis and electronic tweaks – while extending the wheelbase of the bike to better suit Marquez’s style.

This manifested itself in the form of a seventh-place finish for Marquez in the second Misano race – having finished 17th the week before – followed by his back-to-back podiums at Le Mans and Aragon.

When asked what he still has to learn in riding a MotoGP bike, Marquez explained: “Well, I think I started to understand why everybody says the Honda is a difficult bike. I think it is a difficult bike because you need to be strong in all the points, not like Yamaha.

“They need to focus a lot on low speed corners and acceleration. Maybe Ducati, they focus more on acceleration only. With Honda you need to be strong in all the points, in the brake point, corner speed, but also in acceleration.

“This is the point that it is so demanding to the rider, because you need to be always on the limit; if you try to relax a little bit you lose one second, maybe with another bike you lose two tenths. This is why it is so difficult and demanding and so physical for a rider.

“But I start to enjoy it, I start to have the bike [I want] on my hands and for that reason everything is coming in a better way and I start to understand a little bit better, especially from part of the bike.”

Marquez says after the breakthrough Misano test he’s gone “a little bit more in Marc [Marquez’s] way on set-up”, which – combined with the bike changes – has given him greater front-end confidence.

“Essentially we all have the same [material] to an extent,” Crutchlow said when asked if Marquez’s step forward was just him displaying what made him a world champion in Moto2 and Moto3. “He’s just riding very well, simple as that. We haven’t made a miracle, no massive thing.

“Yes, we have the new shock. But they’re always working. You have a small electronic thing, but essentially the settings we’re using on the bike are the settings I was using three years ago. The wheelbase, stuff like that, is all much of a muchness.

“Now, they bring things more with the electronics, or this or that, and yes we have the shock and it seems maybe better in certain conditions. But the reason Alex is going well is because he’s riding in a great way.”

sportsgamingwirehttps://sportsgamingwire.com
As an Editor and an Sports Geek, it's my pleasure to share my knowledge about Sports and their various aspects that can impact our lives.
Previous articleInterMat Wrestling – NWCA Multi-Division National Duals canceled
Next article2020 Halloween Gaming Events To Enjoy This Month