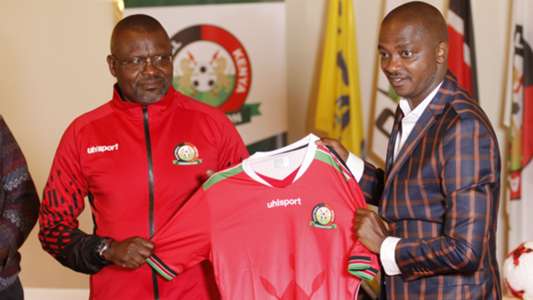 Football Kenya Federation (FKF) president Nick Mwendwa has described the hiring of Jacob ‘Ghost’ Mulee as the Harambee Stars coach as “a special gift” to Kenyans.

The 52-year-old tactician was handed the mantle to handle the team on a three-year contract following the exit of Francis Kimanzi, whom the Federation claims they parted with on mutual agreement on Tuesday.

Mwendwa has now told Goal he settled for ‘Ghost’ to take charge of the team because he has been there before and knows what it takes to qualify a team to the Africa Cup of Nations finals.

The return of the Ghost !! pic.twitter.com/Rlw19MaLtT

“I am 100 percent sure that he will use that knowledge we got in the last Afcon and when he was there to try and do better in the Afcon, we want to be there all the time and he now have the chance to do that with us, and I strongly believe he will succeed.

“He will be there for a contract of three years and if he qualifies for the 2022 Afcon and the World Cup then we can extend it so we find stability with our boys and motivate them, we can find something special, and that is what I have brought to you, a special gift.”

On unveiling ‘Ghost’, the last local coach to take Kenya to the 2004 Afcon finals held in Tunis, Tunisia, Mwendwa explained: “We are done with elections and now it is all about football and today [Wednesday] I am happy, in a new chapter, in our new beginning, in our next notch for Kenyan football to introduce to you a change in our national team bench, that will pave the way to the work we want to do to head to the Afcon 2022 in Cameroon.

“It will also help us for Afcon and the World Cup in Qatar, I have spoken many times and many years the last four years about going to the World Cup and today we start laying down the framework to find ways of competing against Mali, Uganda and Rwanda from June next year.

“But before that is to compete against Comoros on November 11 and 15 and then play against Togo away in March and Egypt in Kenya in March as well, we have four matches to go for Afcon qualification, we have two points and we need more points to be back at Afcon again.

“We are starting our new term only two days into it and we found it necessary [having discussed it for a while], to make a change in the bench and so I want to bring you Jacob ‘Ghost’ Mulee, who everybody knows, who is the last coach to take Kenya to take the Afcon finals in 2004, and who is a household name in Kenya, once again to spur on our team, energise our team, to play and hunting for qualification for both the Afcon and the World Cup.

“I know it is not a simple job. We want to support him, we want to find something special in the team, I also ask you to support him, let us give it life, let us push the boys across the finishing line so that we can join the elite nations of African football.”

Kenya started their campaign in the Afcon qualifiers with a 1-1 draw against Egypt away in Cairo before getting another 1-1 draw, against Togo at Kasarani Stadium in Nairobi.

sportsgamingwirehttps://sportsgamingwire.com
As an Editor and an Sports Geek, it's my pleasure to share my knowledge about Sports and their various aspects that can impact our lives.
Previous articleThe Best Holiday Dash Sales
Next articleNew Daily Bugle Shows Off More Of The Suits In Marvel’s Spider-Man: Miles Morales