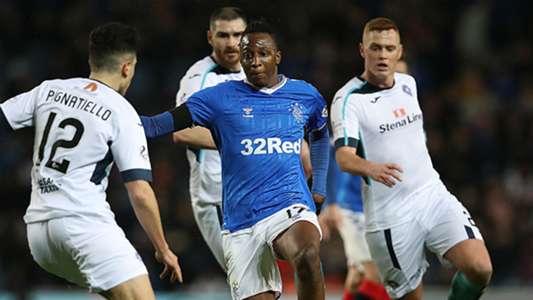 Rangers manager Steven Gerrard hopes to get Joe Aribo up to speed ahead of their Europa League Group D clash against Standard Liege on Thursday.

The 24-year-old midfielder has been out of action since August 12 when he suffered an ankle sprain against St. Johnstone.

The Nigeria international, however, made a return for the Ibrox Stadium outfit on Saturday in their victory over Celtic, making a cameo appearance in the encounter.

Despite his return from injury, Gerrard believes Aribo is not fully back to fitness and the club will do all it takes to help him.

“The squad is in a really good place at the moment. We still need to get Roofe and Aribo up to full speed,” Gerrard said in a pre-match conference.

“Everyone is fit and available and is only Katic not with us at the moment. I am excited to work with a full group of players.”

Aribo has been delivering impressive performances for the Ibrox Stadium outfit since teaming up with the club in the summer of 2019.

The midfielder scored nine goals across all competitions amid other dazzling displays in his debut campaign, helping Rangers finish second in the Scottish Premiership.

The Super Eagles star was rewarded for his eye-catching showings, winning the club’s Young Player of the 2019-20 season.

Aribo has scored one goal in four appearances for Rangers in the current campaign and will hope to add to the effort against Standard Liege.

The 24-year-old has become a key member of the Nigeria national team since he made his debut for the side against Ukraine in 2019.

Aribo’s injury problems forced him out of the Super Eagles games against African Champions Algeria and Tunisia this month.

Barring any injury, he would be expected to play a part when the West Africans take on Sierra Leone in an Africa Cup of Nations qualifying game in November.

sportsgamingwirehttps://sportsgamingwire.com
As an Editor and an Sports Geek, it's my pleasure to share my knowledge about Sports and their various aspects that can impact our lives.
Previous articleWarzone Zombie Royale guide – best loadout, tips, and tricks
Next articleChampions League PIX: Real Madrid stunned by Shakhtar