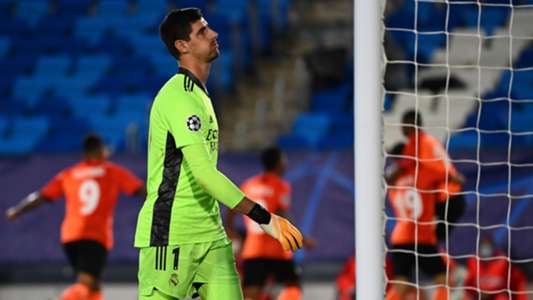 Shakhtar Donetsk stunned the Spanish side on Wednesday, hitting three goals past the La Liga champions in a remarkable first half

Real Madrid have now lost three consecutive Champions League matches for the first time in more than 30 years as Zinedine Zidane’s side were unable to overcome their worst first-half performance in more than 15 years in the competition.

The La Liga champions conceded three goals in the first half against Shakhtar Donetsk to head into half-time down 3-0 thanks to goals from Tete and Manor Salomon as well as a Raphel Varane own goal.

Despite missing several first-team players due to positive coronavirus tests, Shakhtar ran riot in the opening half of the Group B clash in Madrid, with their three goals coming in the space of 13 minutes.

Tete scored the first, firing an assured finish into the bottom-left corner to break the deadlock just before the half-hour mark.

Raphael Varane then scored an own goal four minutes later before Solomon made it 3-0 from Tete’s neat backheel.

3 – Real Madrid have conceded three first half goals in a Champions League match for the first time since September 2005 vs Lyon, while this is the first time it has happened at home in the competition since February 2000 vs Bayern Munich. Shocker. pic.twitter.com/B5gCvaaDGF

It meant Madrid let in three first-half goals in the Champions League for the first time since September 2005, when they did so in a clash with Lyon.

Madrid had not conceded three in the first 45 minutes of a home match in the competition since February 2000, against Bayern Munich.

It also continued an unwanted record for Real Madrid, who have now lost seven of their last eight Champions League matches that have not featured Sergio Ramos.

Having lost each of the two legs in their last-16 clash with Manchester City last season, Real Madrid have now lost three consecutive Champions League matches as well.

That means Wednesday’s defeat marks the first time they’ve lost that many matches in a row in the Champions League since September 1986.

Shakhtar, meanwhile became the first Ukrainian team to win against Real Madrid in the Champions League since March 1999, when Dynamo Kiev won 2-0.

At that point, Shakhtar’s two goalscorers, Tete and Solomon were not yet born, with the latter born in July 1999 and the former born in February 2000.

Real Madrid will need to bounce back quickly as Zidane’s side will now look ahead to a match against Barcelona this weekend.

sportsgamingwirehttps://sportsgamingwire.com
As an Editor and an Sports Geek, it's my pleasure to share my knowledge about Sports and their various aspects that can impact our lives.
Previous articleDarkest Dungeon will launch early access in 2021
Next articleWarzone Zombie Royale guide – best loadout, tips, and tricks