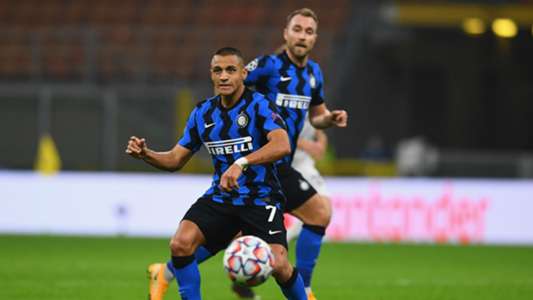 Sanchez, making just his second start of the season, was replaced by Lautaro Martinez at half-time after a disappointing opening 45 minutes in the Group B opener.

Serie A club Inter revealed post-match that Chilean forward Sanchez had been taken off after experiencing tightening in his right adductor.

“Alexis Sanchez came off at half-time during tonight’s match after experiencing a problem with his right adductor muscle,” the club said on Twitter after the game.

No player completed fewer than his 11 passes during the first half, while the former Manchester United man lost possession eight times and won just one of his nine duels.

Inter were indebted to a 90th-minute equaliser from Romelu Lukaku – his second goal of the game – to salvage a point against Bundesliga visitors Gladbach on matchday one.

Inter head coach Conte refused to be too hard on his players and said the loss of full-back Achraf Hakimi due to a positive coronavirus test shortly before the game had a significant impact on his side’s preparations.

“We have to concentrate on doing our best on the pitch,” Conte told Sky Sport Italia. “That’s all we have to do. It wasn’t easy today to receive the news at 5pm that Hakimi was positive.

“Up until this morning, he was training with us. He was meant to start, so we’d prepared all the tactical situations.

“I told the lads to face every situation with heads held high. It wasn’t easy on a psychological level, but the lads showed they are good men as well as good players.

“Tonight we did well against a team with a great deal of potential, one that has technical quality as well as physicality.

“I don’t remember a Samir Handanovic save, whereas we had the chances to win the game. I have nothing to reproach the lads for.

“Inevitably, we can improve in some situations where there are errors and we have to work on whittling those down.”

Lukaku cut a frustrated figure despite his late equaliser and said Inter need to show more resilience after their winless run was extended to three games in all competitions.

The Belgian star has now scored in each of his last nine European fixtures across the Champions League and Europa League (11), extending the longest-ever such run by a player for Inter.

“This is not a good result in my view, because we can do better,” he said. “We must keep working and be stronger mentally because it’s not an easy moment for us and we have to keep believing in our quality.

“Now we need to be stronger, above all mentally, and do better in defence, as we conceded two goals due to our errors. We made so many mistakes and wasted chances up front too, so if we don’t take those we are made to pay at this level.”

sportsgamingwirehttps://sportsgamingwire.com
As an Editor and an Sports Geek, it's my pleasure to share my knowledge about Sports and their various aspects that can impact our lives.
Previous articleFryar Hoping For $30,000 & A Title At Greenville
Next articleTransfer news and rumours LIVE: Man Utd unhappy with Greenwood