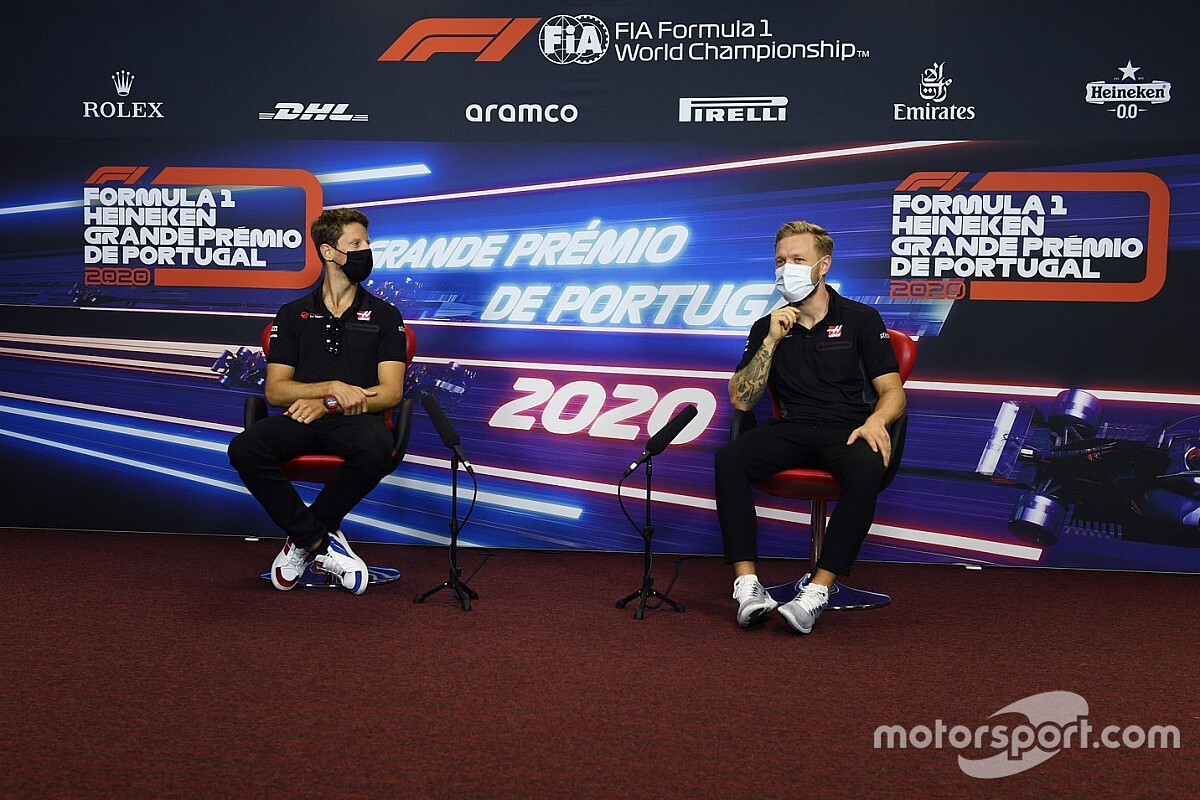 On Thursday morning both Grosjean and teammate Kevin Magnussen used social media to announce that they would not be staying next season, shortly before the team issued an official statement.

Grosjean says he expected either himself or Magnussen not be retained, especially given the economic climate created by COVID-19.

Grosjean says he has no firm plans for next season, but indicated that he’s looking outside F1 for a category where he will have a chance of winning races.

“Yes, a little bit,” he said when asked if the news of the double departure was a surprise.

“I knew probably one of us will be out at the end of the year, just because of the situation around the world, and how COVID has made it very hard financially for a lot of companies around the world.

“So I knew one of us would go out, and that’s why I said to Gunther on the call when he called me that I was expecting one of us, and he said, ‘No, for financial reasons, I need both of you out.’

“So fair enough, I fully understand. I know it’s been a tough year with COVID in a lot of industries or companies that suffer from it. The team is going a different path, and I wish them luck and the best for the future.”

Grosjean said he’s not in a position to finance a drive.

“I’ve had some partners in my career following me through different teams, but I’ve never been a pay driver as such, and I don’t want to become one. It’s just the way it is.”

Grosjean has no issue regarding the timing of the decision, which was made two or three weeks ago according to Steiner, but was only communicated to the two drivers last week.

“It wasn’t our call to make the decision of when to announce,” he said. “Obviously earlier, it’s always a bit better, it gives us a bit more time to find anything. But in 2011 I was told on December 8th that I was going to be in F1 the year after. So I’ve known later.

“I think I could tell yet the decision was made some some time ago. But I guess Gunther felt good enough to tell us last week, and that’s fine by me.”

Grosjean made it clear that he sees his future in a category where he can challenge for victories.

“There are a few discussions and few options that I would love to race. I miss the winning feeling as well, I miss coming into a race weekend thinking I can fight for the win this weekend, I can fight for a podium, I need the best of myself to get there.

“Rather than just maybe hoping to get out of Q1, and if things happen, score a point or two. It doesn’t mean you don’t give your best when it’s like this, but you miss something as a racer, and hopefully I can figure out good options for me and let you know, ASAP.”

Asked if he had ruled out F1 completely he acknowledged that it was unlikely, but he hasn’t given up.

“I think in F1 there aren’t many seats left, and it looks complicated. But I was talking to my seven-year-old son the other day, and I told him something is impossible. And he looked at me and he said ‘Daddy, in impossible, there is “possible”. So there’s always a way.’

“And coming from a seven years old boy, I found it really cool. And I liked it. So let’s see. And outside F1, there are many challenges that are appealing.

“Probably not cars as fast as F1, nothing is as fast as an F1 car, but different challenges. And winning. Winning is something I really miss. And hopefully, I get back to it quite soon.”

sportsgamingwirehttps://sportsgamingwire.com
As an Editor and an Sports Geek, it's my pleasure to share my knowledge about Sports and their various aspects that can impact our lives.
Previous articleReguilon explains why he swapped Zidane & Real Madrid for Mourinho & Tottenham
Next articleUpUpDownDown takes over WWE ThunderDome with “Mario Kart Live: Home Circuit”