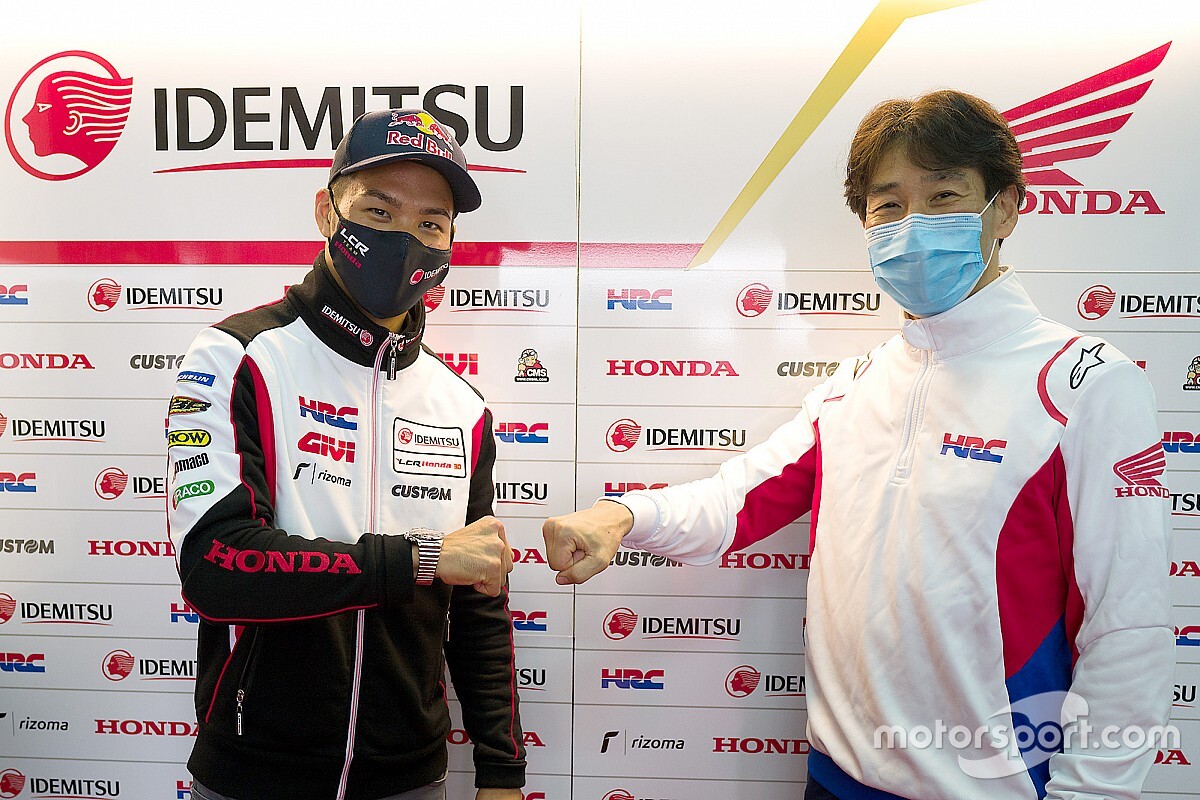 Honda announced earlier on Thursday that Moto2 race winner Nakagami had signed a new multi-year contract with the Japanese marque to remain with LCR, though the release made no mention of specific contract length or what specification of bike he would be riding.

Currently, Nakagami is racing last year’s RC213V and is top Honda rider in the standings at the moment in fifth and just 29 points off leader Joan Mir. Nakagami has now confirmed his deal will run through to the end of 2022 and he will have machine parity with Marc Marquez, Pol Espargaro and Alex Marquez.

“For the next season, I can say that I’ll ride the latest bike,” Nakagami said ahead of this weekend’s Teruel Grand Prix. “[The] four [Honda] bikes will be exactly the same, this is good news for me. Last three years for me, I rode the previous [year’s] bike.

“So, for next season, the regulations are not exactly the same situation as always but Honda say that the four bikes – Marc, Alex, Pol and me – are [the] same package, same bike. I’m really happy, but now it’s time to show our potential and if we can beat the Repsol team, if we can fight with the factory team it will be nice.

“I’m really interested, and I can’t wait for the next season. I believe with this team we can do it.”

As part of the COVID-19 cost-cutting measures, all manufacturers will start the 2021 season with 2020-spec engines and aerodynamic fairings.

After the first round, normal update rules will apply – meaning, as per the concession regulations, only Aprilia will be able to freely update its engine and aero, while the other manufacturers will have engine development frozen. But they will still be able to bring other updates, such as to the chassis, suspension and electronics.

Nakagami’s team-mate at LCR through to 2022 will be Alex Marquez, who will also have full factory support and currents-spec machinery. Current LCR rider Cal Crutchlow believes Honda was still correct to move the younger Marquez brother out of the factory team for 2021 when they did, despite his back-to-back podiums at Le Mans and Aragon.

Alex Marquez says it’s easy now to question Honda’s decision, but he still stands by it as he did when it was made pre-season.

“After races, it’s more easy to take a decision,” Marquez said when asked if Honda was too quick to take him out of the factory team for 2021. “But the situation was really strange, I explained many times.

“I agreed about the conditions and the decision of Honda. It’s a great opportunity to go to the LCR family, to grow up there because still I have a lot of things to improve, to step-by-step learn.”

sportsgamingwirehttps://sportsgamingwire.com
As an Editor and an Sports Geek, it's my pleasure to share my knowledge about Sports and their various aspects that can impact our lives.
Previous articleBerry Lands Partial Xfinity Slate With JR Motorsports
Next articleFloyd Mayweather Jr. says there are too many titles in boxing, ahead of Gervonta Davis-Leo Santa Cruz fight