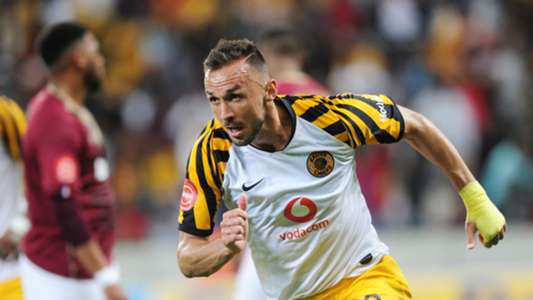 The two giants renew their rivalry after Sundowns pipped Chiefs to the 2019/20 league title on the final day of the season.

But Chiefs go into this battle without their injured key man Nurkovic who was their top goal-scorer last season with 13 league goals. The Serbian will be out of action for the next six weeks.

But Parker feels that coach Gavin Hunt is spoilt for choice in selecting players who could step up to claim Nurkovic’s responsibilities.

“The coach has options,” said Parker as per Phakaaathi.

“Leonardo Castro came on and made a difference in the last match, and he will be better this week than last week, he is getting sharper. [Lazarous] Kambole is coming up, he is showing he can play, can add a lot of value, and don’t forget [Dumisani] Zuma.

“The coach … has to work around what he has got now and see how he can get combinations and working relationships … among the attackers in the best possible way. [Lebogang] Manyama is back as well, and there is exciting young talent also adding a lot of value. [Happy] Mashiane and [Nkosingiphile] Ngcobo are showing they are ready to play as well.”

Lebogang Manyama is back from suspension together with midfielder Willard Katsande after missing last weekend’s MTN8 quarter-final triumph over Maritzburg United.

After lasting the entire match against Maritzburg, Parker is enjoying his game under Hunt whom he says has redeployed him as a number 10 than on the wings he was playing under former coach Ernst Middendorp.

“Everyone is working to be more effective. I am playing now in a familiar role, where I have played throughout my career,” said Parker.

“Being a number 10, supplying and also linking play between midfield and attack. It has been working, not only for me, but also for the other guys. It is what the coach wants now, for everyone to play according to his strengths,” Parker said.

The last time Mamelodi Sundowns and Chiefs met was in the PSL bio-bubble, with Downs edging their rivals 1-0, a result which had a big say in their title triumph.

sportsgamingwirehttps://sportsgamingwire.com
As an Editor and an Sports Geek, it's my pleasure to share my knowledge about Sports and their various aspects that can impact our lives.
Previous articleAll The Big Games Coming Out In Fall 2020
Next articleF1 stewards aren’t giving me an easy time, says Leclerc · RaceFans