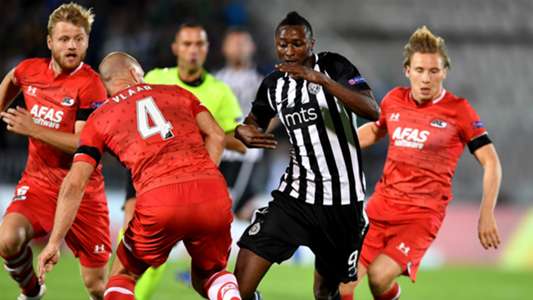 Umar Sadiq earned Almeria a 1-1 draw against FC Cartagena with his first goal in the Segunda Division on Wednesday.

The result ended the Rojiblancos’ run of three straight defeats in the league and it was their first point since their 2-0 win over Lugo on the opening day.

The 23-year-old found the back of the net in the 65th minute, courtesy of an assist from Joao Carvalho, to draw Almeria level after Ruben Castro’s 17th-minute opener for FC Cartagena.

Sadiq played from start to finish for the hosts at the Estadio de los Juegos Mediterraneos as he registered his third league appearance since his arrival from Serbian club Partizan Belgrade on October 5.

The former AS Roma and Rangers striker led Almeria’s attack and was a constant threat in the opposition’s area throughout the game.

Almeria will aim to build on Wednesday’s result when they host high-flying Fuenlabrada, who are yet to lose a match this season, for their next Segunda Division outing on Saturday.

Jose Gomes’ side are 19th in the league table and they are battling in the relegation zone with four points after five matches.

sportsgamingwirehttps://sportsgamingwire.com
As an Editor and an Sports Geek, it's my pleasure to share my knowledge about Sports and their various aspects that can impact our lives.
Previous articleNico Rosberg launches Extreme E team
Next article‘Liverpool were vulnerable’ – Ajax boss Ten Hag rues missed opportunity in Champions League defeat