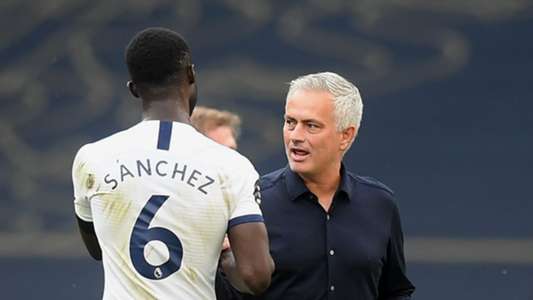 Tottenham centre-back Davinson Sanchez has responded to Jose Mourinho’s comments about the 2017 Europa League final that saw the two face off against each other.

At the time, Sanchez was lining up for Ajax, while Mourinho was in charge of Manchester United, who ultimately won the match 2-0.

Upon arriving at Spurs, Mourinho was filmed on Amazon’s ‘All or Nothing’ documentary series having an early conversation with Sanchez in which the Portuguese tactician claimed he had won the game in “minute one”.

Though a humorous exchange, Sanchez saw the truth in Mourinho’s observation and believes the odds were always stacked against Ajax.

“In that moment as a team in Ajax we played very well, very, very well as they have done for the last season, two seasons ago. At that moment we were playing very well but we lacked that experience,” Sanchez said in a press conference on Wednesday.

“The talent was there but experience was missing. That conversation was funny, but if my manager is saying that to me, at the moment I admit to the problem in that area like I am doing now.

“I am thinking to keep growing up and improving. We played very, very good football, but we missed [a player like] Paul Pogba. In that moment [Mourinho’s jibe] was fine, I took it in a good way.”

Sanchez and Mourinho will team up for Tottenham in the Europa League this season with Spurs kicking off their group campaign against LASK on Thursday.

Mourinho’s side enter the match after a 3-3 draw with West Ham that saw them concede three goals in the final 15 minutes and Sanchez is determined to ensure the club react the right way.

“We want to be in that position that gives us that chance to keep fighting until the end. It is a 10 minutes we cannot repeat, we can’t concede to any opponent,” Sanchez said.

“It is not just about someone thinking they have the quality or not, every opponent we cannot concede that. Even starting or in the last moment of the game, like happened. We are experienced enough players that have been playing at the high level a long time.

“It was tough to take because in the way it happened it can hurt very badly. We have enough experience to move on. We have not forgotten what happened but we have moved on because the next game is tomorrow.”

sportsgamingwirehttps://sportsgamingwire.com
As an Editor and an Sports Geek, it's my pleasure to share my knowledge about Sports and their various aspects that can impact our lives.
Previous articleNintendo Nerfs Steve’s Meat
Next articleOn Your Marks