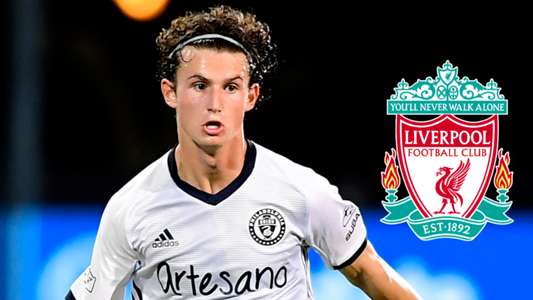 The 19-year-old is leaving the Philadelphia Union for Red Bull Salzburg in January, but his true ambitions seemingly lie at Anfield

Rising star Brenden Aaronson has revealed he is a huge Liverpool fan and dreams of playing in the Premier League.

Aaronson, who earned his first cap for the U.S. men’s national team earlier this year, will make the leap from MLS to Europe when he joins Jesse Marsch’s Red Bull Salzburg in January.

“My dad introduced me to the game at a young age as he played college football in America,” Aaronson told Sky Sports. “He also put me in front of a TV and I watched Liverpool ever since.

“As long as I can remember I’ve been a Liverpool fan. I have Steven Gerrard and Fernando Torres posters in my room, those two were the ones I looked up to. I have Liverpool winning the Champions League above my bed too.

Brenden Aaronson – they call him the ‘U.S. Havertz’ 👀

You can see why 🤩pic.twitter.com/GYUONnDOcG

“When they won the title last year, that was a crazy moment for me. Going back to the Gerrard slip… it was tough but to see them absolutely dominate the Premier League, it was insane and I was so happy on the inside.”

Aaronson knows he arrives in Europe with plenty to prove but, with the likes of Erling Haaland – plus Liverpool pair Sadio Mane and Naby Keita – having made their names in Salzburg, he is in a good place to take the next step.

In the future, though, the teenager would love to see himself playing in England.

“I think the Premier League is the dream league for me. It’s unbelievable and it keeps going upwards.

“The players keep getting better and better and for me, it’s for sure a dream league and something I would like to be a part of for any team over there really!”

Aaronson has been compared to Chelsea star Kai Havertz in the past, but he aims to emulate Reds great Gerrard in his midfield role.

“I think we’re a little different in positioning, but I used to see him go into games and giving it his all every game,” he said.

“I think I’m an energetic center midfielder that loves to get forward, score goals and get assists. I’m creative when I get to the final third and I like to make stuff happen when I get the ball.”

sportsgamingwirehttps://sportsgamingwire.com
As an Editor and an Sports Geek, it's my pleasure to share my knowledge about Sports and their various aspects that can impact our lives.
Previous articleRoman Reigns to reveal consequences for Sunday’s Universal Title Hell in a Cell “I Quit” Match with Jey Uso
Next articleHere’s Why a Live-Action Mass Effect Movie Won’t Work, But A TV Show Could