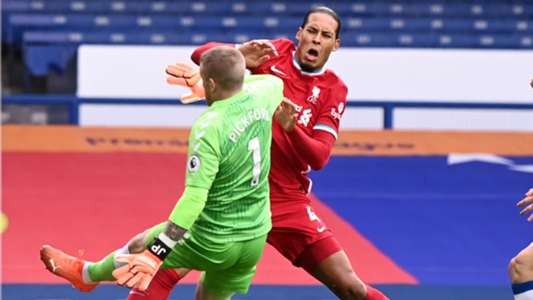 The England international clattered into a Dutch centre-half during a derby date at Goodison, but his manager says his tackle was merely “mistimed”

Jordan Pickford is “really sad” to have forced Virgil van Dijk under the knife, says Everton manager Carlo Ancelotti, with a knee-high tackle on the Liverpool defender considered to have been nothing more than “mistimed”.

The Toffees’ England international goalkeeper clattered into the Dutch defender early on at Goodison Park.

Van Dijk did get back to his feet, but he was in no position to continue and is now facing up to several months on the sidelines with cruciate ligament damage.

Pickford has seen his wild lunge widely condemned, with many bemused as to how he avoided any form of punishment, but Ancelotti insists there was no malice on the part of his player and that Liverpool were merely the victims of an unfortunate sporting incident.

The Italian has told evertontv: “To be clear, we are really sorry for the injury of Virgil van Dijk. Every one of us hopes he can recover soon and well.

“There was this contact with Jordan Pickford: it was mistimed contact. But the fact the Premier League is so fast, it is not so difficult to arrive a little bit later.

“Jordan arrived a little bit later but his intention was to try to reach the ball. It was not to hurt Virgil van Dijk.

“To say it was premeditated, and this and that, in my opinion, is too much. Virgil van Dijk knows this.

“Jordan is really sad, really disappointed [that he is injured]. It was a strong contact, maybe mistimed, but sometimes in football, it can happen.”

Ancelotti’s opinion is not shared by everyone, with Liverpool legend Graeme Souness among those to have condemned Pickford for a rush of blood that has become all too common in the 26-year-old keeper’s game.

He told Sky Sports: “I guarantee you, every single professional who has ever played the game, semi-professional, maybe the guys on Hackney Marshes, when you look at that, the focus is not on the offside, their focus is on one thing: the assault on the player.

“It’s outrageous. For me, as an ex-player, it’s ‘wow!’. These people who make these decisions, who sit in Stockley Park, can look at that and think, ‘that’s offside’, I just don’t get it. They just don’t know what they’re talking about.

“I’ve been to Stockley Park, it’s nigh-on impossible to make a mistake with the technology they have, the time they give themselves, and they can still get it wrong. That wasn’t a tackle, that was an assault!”

sportsgamingwirehttps://sportsgamingwire.com
As an Editor and an Sports Geek, it's my pleasure to share my knowledge about Sports and their various aspects that can impact our lives.
Previous articleCrossCode (PC/Switch, 2015) Video Game Music Review
Next articleHorror game Scorn shows its Giger and Beksiński influences