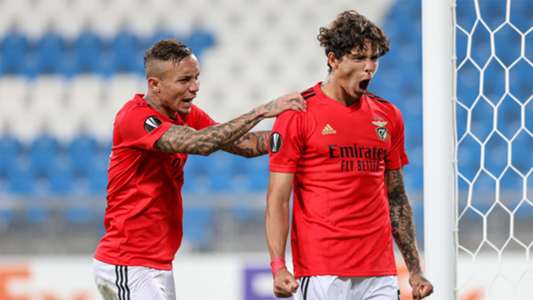 Nunez opened his account for Benfica with a three-goal haul as the Portuguese powerhouse defeated Lech Poznan 4-2 in their Europa League opener on Thursday.

The 21-year-old Uruguay forward became Benfica’s most expensive signing when he arrived from Almeria in a €24 million ($28m) deal in September.

“We got it right. We must not forget that he is a kid, he is 21 years old, there is a lot about the game that he does not know yet. He will learn with me and Benfica,” Jesus told SportTV.

“All this decision-making ability, finishing and speed…He was Benfica’s most expensive purchase, and when there is no pandemic, he will be the most expensive sale. He will be a world-class player.

“Unfortunately for me, maybe I will lose him in a short time.”

Benfica’s Nunez scored with all three shots on target away to Polish side Lech Poznan.

Nunez made it 2-1 for Benfica three minutes prior to half-time before netting his second of the match on the hour-mark as he completed his hat-trick in the third minute of stoppage time.

“Three goals? It means a lot to me,” Nunez told SIC. “When I don’t score, I try to help the team. I haven’t scored for five games, but I worked for the team.

“From the first moment the team gave me confidence. They think I deserved these goals. I am very happy.

“I thought I was going to score my first goal. I didn’t expect the three goals, but thankfully. Now it’s time to continue working with humility. It’s a difficult series now and we have to prepare ourselves in the best way.”

While yet to score in Portugal‘s top-flight, Nunez has contributed four assists from as many games and will be backing himself to fire in the league when Benfica are next in action against Belenenses on Monday.

sportsgamingwirehttps://sportsgamingwire.com
As an Editor and an Sports Geek, it's my pleasure to share my knowledge about Sports and their various aspects that can impact our lives.
Previous articleRitu Phogat: The Indian Tigress is ready to fight!
Next articleISL amid COVID-19: Hyderabad aims to rise to the occasion