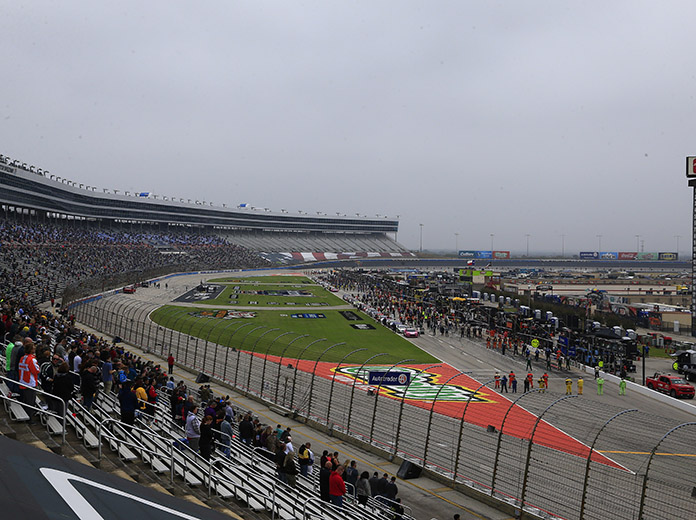 FORT WORTH, Texas – Despite the best efforts of NASCAR officials, Mother Nature won for the second-straight day at Texas Motor Speedway on Monday.

Persistent rain forced NASCAR Cup Series officials to again postpone the completion of the Autotrader EchoPark 500 at the 1.5-mile oval. NASCAR officials continually attempted to dry the track Monday in the hopes of resuming the race, but the persistent precipitation squelched those efforts.

The race is scheduled to resume on Tuesday at Noon E.T. It will be broadcast live on NBCSN, PRN and SiriusXM NASCAR Radio.

The race was stopped for mist that turned into more persistent rain on Sunday afternoon after 52 of the scheduled 334 laps were completed.

At the time of the red flag on Sunday Clint Bowyer was the race leader ahead of Jimmie Johnson, Erik Jones and playoff contenders Joey Logano and Martin Truex Jr.

Kevin Harvick led the first 28 laps, but smacked the wall just before lap 30. Harvick is currently 36th, one lap down.

sportsgamingwirehttps://sportsgamingwire.com
As an Editor and an Sports Geek, it's my pleasure to share my knowledge about Sports and their various aspects that can impact our lives.
Previous articleThe night Larry Holmes flew in Florida
Next articleThe Inspirations, Relationships, And Story Of Marvel’s Spider-Man: Miles Morales