Espargaro will “test” Rins at start of European GP 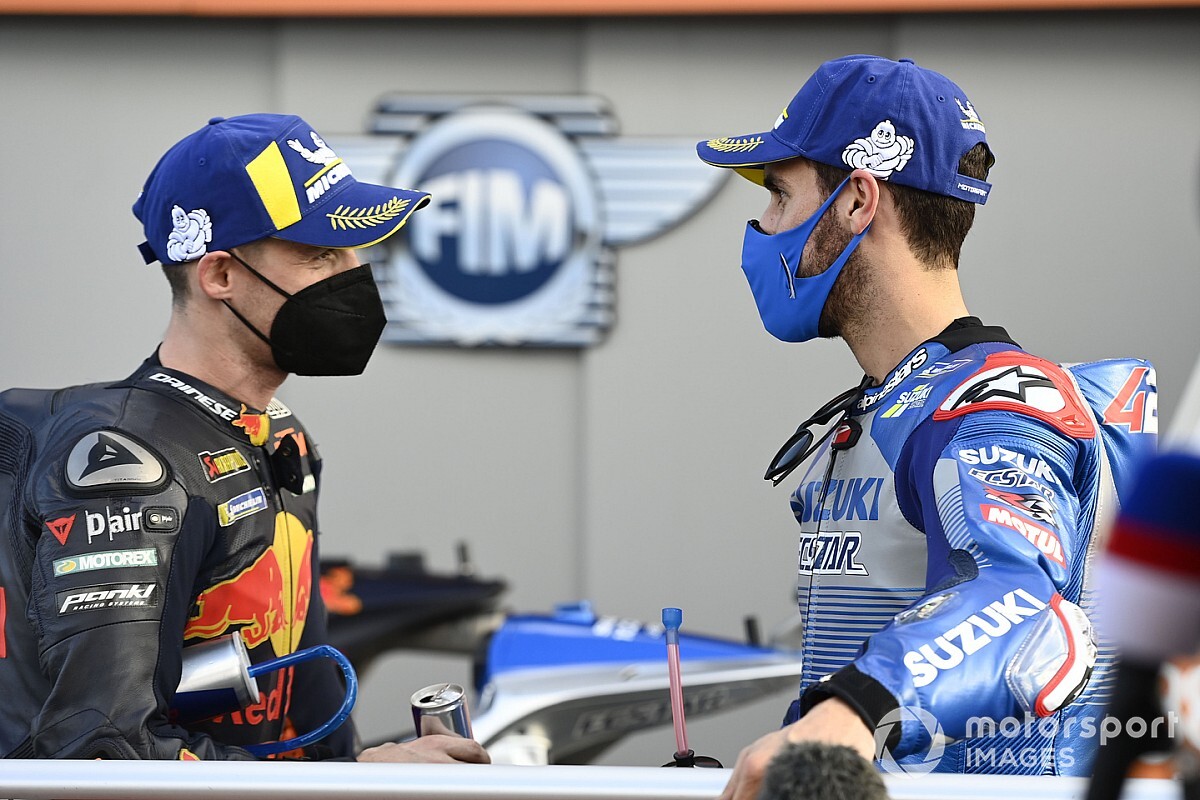 Espargaro snatched his first pole since the Styrian GP on Saturday on a damp Ricardo Tormo Circuit near Valencia by 0.041 seconds from championship contender Rins.

Sunday’s race is expected to be dry, but a pecking order is hard to gauge as there has been no real dry running this weekend aside from the mixed conditions of FP2 – in which Espargaro was fifth fastest.

“Basically, I have Alex very close to me on the grid, who is especially strong on Sunday in the race,” Espargaro said.

“If he does a better start I will kind of test him, see how fast he is. If we can be around him all the race it will be a great achievement.

“And if I’m first, I will push from the first lap. I don’t care actually about the tyres in the first laps of the race, we have no info.

“But I’m going to do my best, if I can get some small gap at the beginning by just burning the tyre I will do that.

“We will try to get some more data in the warm-up to see if by burning the tyre with low electronics we can make the race in a good performance, or if I’ll suffer at the end.

“I will give my all. That’s the only thing in my mind, to go from the first to the last lap, risking everything, especially in the first right [corner at Turn 4], which will be tricky.

Rins is the leading championship contender from the top six in the standings on the grid in second, but is also the furthest off title leader and Suzuki teammate Joan Mir by 32 points.

Despite being in strong, but equally precarious position for the race, Aragon GP winner Rins says his strategy will be to push from the off.

“You say my strategy, pushing from the beginning,” Rins said when asked by Motorsport.com if this would be his plan for the race.

“As you said, the title contenders are starting from the back, except Mir, he’s starting on the second row.

“But we need to focus on ourselves, we need to push hard from the beginning till the end. Let’s see how the tyre consumption is going during the race and that’s all.”

sportsgamingwirehttps://sportsgamingwire.com
As an Editor and an Sports Geek, it's my pleasure to share my knowledge about Sports and their various aspects that can impact our lives.
Previous articleMass Effect Trilogy Remaster Finally Revealed With Legendary Edition
Next article‘Herrera died in the dressing room’ – PSG boss Tuchel singles out midfielder for praise after Rennes win