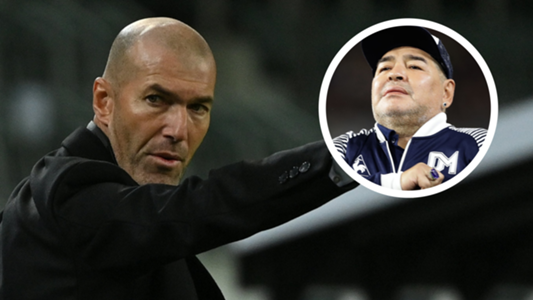 Real Madrid boss Zinedine Zidane has spoken glowingly of Diego Maradona as he recalled his memories of the Argentine legend following his death on Wednesday.

World Cup winner Maradona – arguably football’s greatest ever player – died at the age of 60 after a suspected heart attack.

Former France international Zidane – also a World Cup winner – said following Wednesday’s 2-0 Champions League victory: “It’s an enormous loss for the world of football. I have him engrained in my head because of what he did at the 1986 World Cup. I was 14 years old.

“So that’s my best memory. This is sad news, we send our best wishes to his family. Rest in peace.”

Conte came up against Maradona during his time with boyhood club Lecce in Serie A, and he lauded the former Gimnasia y Esgrima La Plata head coach

“We are all shedding tears for the loss of a man who wrote football history and will always be an indelible figure in this sport,” Conte told Sky Sport Italia.

“He was the poetry of football. I had the pleasure of playing against him, of marking him, and it still doesn’t seem real that he’s gone, especially as he was still young. It’s very sad.”

Maradona, the captain and inspiration behind Argentina‘s World Cup success in 1986 before going on to coach his country at the 2010 showpiece, had been hospitalised just days after turning 60.

He appeared in a fragile state when he briefly made an appearance as his Gimnasia side played a match on the evening of his birthday last month.

He was discharged from hospital a fortnight ago following brain surgery, having undergone a routine operation for a subdural haematoma after being admitted to hospital due to concerns over anaemia and dehydration.

Maradona won 91 caps for Argentina between 1977 and 1994, scoring 34 goals at international level.

He started his career with Argentinos Juniors before joining Boca Juniors and went on to play for Barcelona, Napoli, Sevilla and Newell’s Old Boys before returning to Boca in 1995.

Maradona had the best years of his club career in Italy, playing a massive part in Napoli winning the Serie A title in the 1986-87 and 1989-90 seasons.

Playmaker Maradona also lifted the UEFA Cup with Napoli in 1989 and he won three trophies during his time at Barca – including the Copa del Rey in 1983.

Maradona also had stints in charge of Textil Mandiyu, Racing Club, Al-Wasl, Fujairah and Dorados de Sinaloa in Mexico before being appointed by Gimnasia last year.

sportsgamingwirehttps://sportsgamingwire.com
As an Editor and an Sports Geek, it's my pleasure to share my knowledge about Sports and their various aspects that can impact our lives.
Previous articleCould victory over Joe Joyce take Daniel Dubois’ career up a notch?
Next articleDaniel Dubois vs Joe Joyce – Boxing at its best