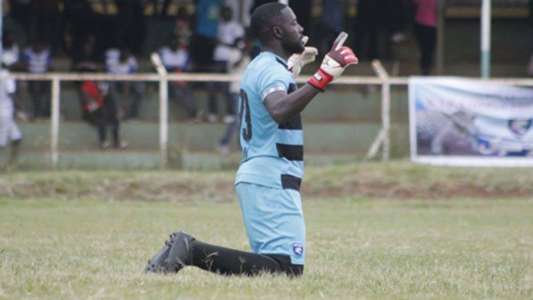 AFC Leopards goalkeeper Benjamin Ochan has revealed areas they must work on for a better season in the 2020/21 Football Kenya Federation Premier League.

The Ugandan stated their general performance last season saw them have a stable season where he also emerged as the best goalkeeper with 15 clean sheets.

“We thank God the long wait is over and the pre-season has been good for us and I believe we are going to have a good season this year,” Ochan told the club’s Online TV.

“One of our strong points last season was working as a unit; we defended together, and attacked together. It was not about an individual as the general performance was a collective thing.

“We must work on those points and improve for a better campaign.

“We believe we are going to build on that and pray we can have more clean sheets this season and remain very solid all through.”

According to the former St George SC goalkeeper the fact that Tusker are under veteran Robert Matano they must be given more respect.

“We respect Tusker and the senior coach they have as they are always very tactical in their approach,” Ochan added. “But we are also prepared as we have a plan which we have worked on all week which we hope to implement during the game.

“We hope for the best and we hope our best is good enough to give us the results we want.”

On his part, new signing Fabrice Mugheni revealed how life has been at the club and how the coach would play a key role in his effort to achieve the set targets.

“Life at AFC Leopards is good and I am fighting to gel together with the rest,” Mugheni said.

“Signing for AFC gave me an opportunity to come to Kenya for the first time and I am working hard to impress especially that I have seen how good the team is.

“It is not all about me it is the coach that plans for the team. We are very ready for the season and I hope the season will be better.”

FKF Premier League is set to kick-off in November after it was initially postponed when the government failed to give the green light for the return of soccer in October.

sportsgamingwirehttps://sportsgamingwire.com
As an Editor and an Sports Geek, it's my pleasure to share my knowledge about Sports and their various aspects that can impact our lives.
Previous articleWhat are we all playing this weekend?
Next articleDisappointed Danny Jacobs takes split decision over Gabriel Rosado