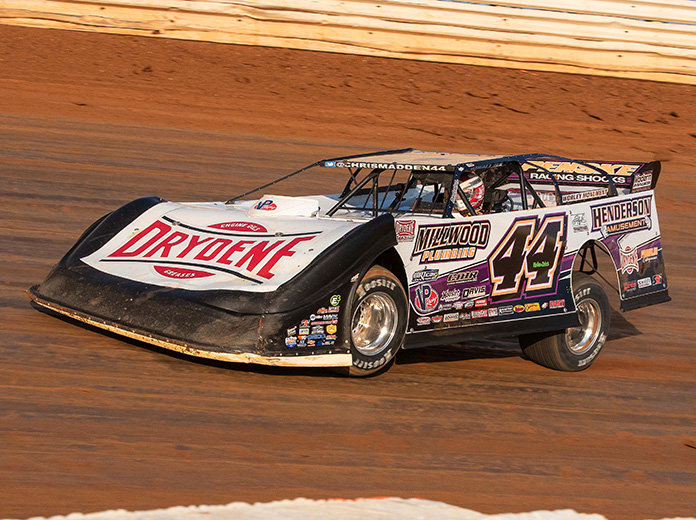 BULLS GAP, Tenn. – Chris Madden played the role of the Grinch on Saturday at Volunteer Speedway by winning the Drydene Xtreme DIRTcar Series Grinch 40 for the second-straight season.

Coming from sixth on the starting grid, Madden made efficient passes inside the first 10 laps of the 40-lap feature to reach the head of the field, carrying his lead all the way back to the checkers to claim the $5,000 top prize over Donald McIntosh and Kyle Strickler.

“This place is one of my favorite racetracks in the country,” Madden said in victory lane. “It’s an awesome place and every time we get a chance to race up here, we always come out and support them.”

When the race began Madden took to the high side and used up all 32 degrees of banking to make his first passes for position, three of which came on the very first lap. After a quick caution on lap two, Madden went right back at it up top, targeting the new track record holder and polesitter Daulton Wilson.

Another caution restacked the field and gave Madden a clear shot at fellow Team Drydene member Scott Bloomquist, this time on the bottom. Madden shot out of a cannon on the restart, and within five laps, Madden had pulled alongside Bloomquist and made the move out of turn four, sliding up in front of him to take the lead as they completed lap nine.

“We were basically just moving around behind him, just running where he wasn’t. We had a great racecar, so it was just a matter of time,” Madden said of the pass on his former teammate.

Bloomquist fell victim to a reported radiator issue just one lap later, pulling into the infield and ending his day early. However, this opened the door to a new challenger – one Madden dealt with one year ago at the very same venue.

Kyle Strickler led 22 laps in the inaugural running of Grinch at the Gap last year before giving up the lead, and the eventual win, to Madden. This time around, Strickler was chasing Madden, and closing in on him rapidly as the race neared the halfway point.

“I thought for a minute in lapped traffic, we were really good, I thought we were even better than Chris and I could give him a run,” Strickler said. “Then, all of a sudden, the car just got really tight.”

Another caution bunched up the field once more and highlighted the progress that Donald McIntosh had made in his quest for the front. Coming from ninth on the starting grid, McIntosh was now staring down the leaders as he prepared to make one final restart.

McIntosh put a big slide job on Strickler in Turns 1-2 before Strickler returned the favor in turns three and four. McIntosh countered with a strong crossover move out of turn four to take the spot permanently on lap 26 and drove off, eyes now set on leader Madden.

The Blount Motorsports No. 7M began to reel in Madden’s Drydene No. 44 in traffic, bringing the interval under a half-second in the closing laps. But Madden was better on the high side in traffic and maintained his gap over McIntosh to claim victory.

“I feel like when we got to those lapped cars, [Madden] kinda used them as pics,” McIntosh said of the battle. “But we had a great racecar. To come from ninth and finish second, I’m pretty proud, especially with the year we’ve had.”

Strickler brought his PPC Motorsports No. 8 across the line in third in just his second race behind the wheel of his brand-new Rocket Chassis, now the current Series points leader. The former UMP Modified pilot has now posted back-to-back third-place finishes in Xtreme Series action, but feels his bid for the lead on Saturday could have been better executed.

“I should’ve been on the top, and I think that by trying to force my way in there to try and get position, it actually hurt me,” Strickler said.

sportsgamingwirehttps://sportsgamingwire.com
As an Editor and an Sports Geek, it's my pleasure to share my knowledge about Sports and their various aspects that can impact our lives.
Previous articleLyndon Arthur secures breakout win over Anthony Yarde
Next articleOn this day: Donald Curry hints at greatness as he obliterates Milton McCrory