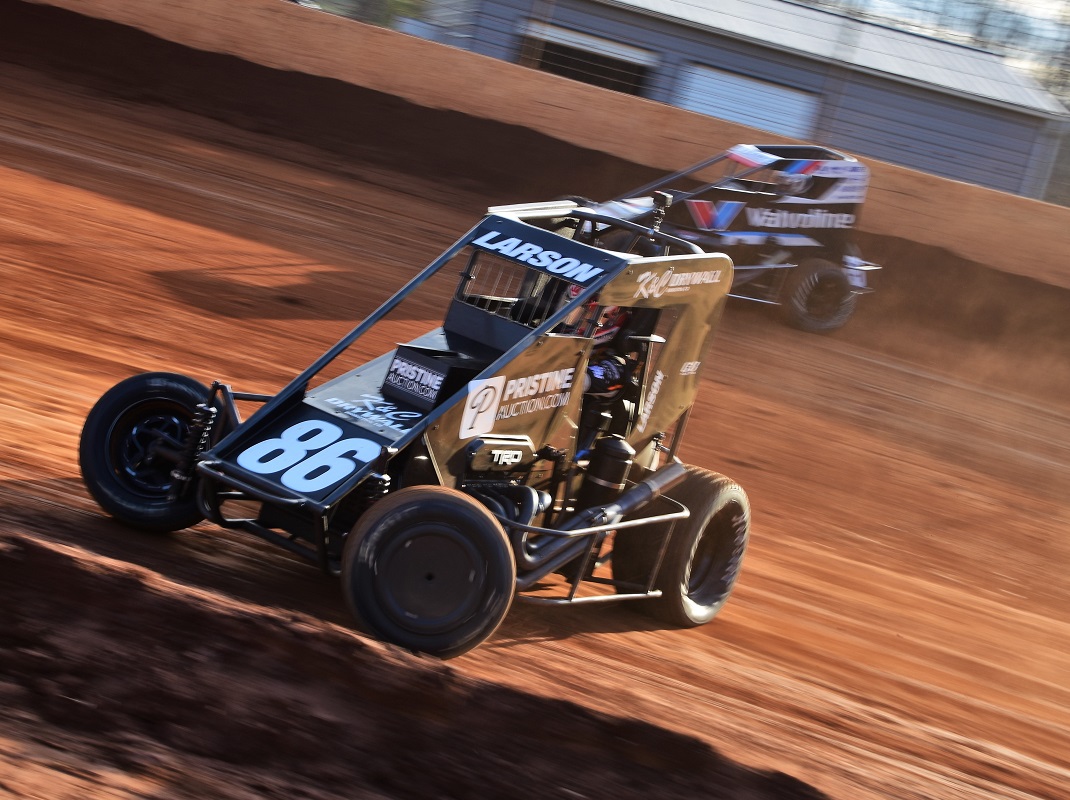 It was also their last chance to prepare for the upcoming Lucas Oil Chili Bowl Nationals, set for Jan. 11-16 inside the River Spirit Expo Center in Tulsa, Okla.

The 35th edition of the Super Bowl of Midget Racing is traditionally the biggest annual meeting of midget cars anywhere in the United States, with more than 300 drivers regularly attending the event.

Because there aren’t normally many midget events held in advance of the Chili Bowl – aside from the Gateway Dirt Nationals, which was cancelled this year due to the COVID-19 pandemic – the twin features held at the sixth-mile Millbridge dirt oval offered a shot to tune up cars and brush up skills.

While reigning NASCAR Cup Series champion Chase Elliott used the two races to learn the art of dirt midget racing, having never competed in the discipline before Saturday, other heavy hitters were fine tuning their Chili Bowl preparations in different ways.

Chase Briscoe, Kyle Larson, Cannon McIntosh and C.J. Leary will all be in action in January at the Chili Bowl, and all four found value in the two features they competed in at Millbridge over the weekend.

Briscoe, in particular, soaked up all the knowledge he could on Saturday. He traditionally only runs in one midget race – the Chili Bowl – each year and is also bringing a new car to Tulsa in January.

That meant the laps he turned, as well as the confidence he gained by holding off reigning Chili Bowl champion Kyle Larson to win the first main event, were crucial to making his program a potential contender.

“I think it depends on who you are, but this was definitely big for us,” said Briscoe. “For me, I only run one race a year now, so Chili Bowl is the only race I get. But for guys like Cannon (McIntosh), he’s raced 50 or 60 times this year, and the same with Kyle (Larson), so I don’t think it’s as big of a deal for them to run here necessarily. But for me at least, I feel like this is my way to kind of shake down a car.

“This is a new car for us, and just me getting laps is huge,” Briscoe added. “So I think for us, it was big to come out here and be a part of this event, and we’ll see what it does for us when we get to Tulsa.”

McIntosh wasn’t driving for the team he’ll be racing for at the Chili Bowl on Saturday – wheeling a car for California’s Robert Dalby instead of his normal Keith Kunz/Curb-Agajanian Motorsports ride – but the Oklahoma teenager still took away plenty and noted it helped keep his skills a little bit sharper.

“This was huge, I think, for me,” McIntosh said. “Just those laps at the end of the race, when it comes to the Chili Bowl, the top (lane) is always going to be there. So it was good to get some laps around the top here, because this place will definitely show you how to run the curb. That was a lot of fun.

“I got to race with some of the best (drivers) in the country; that was an awesome experience and I think I learned a few things I can file away for later on.”

Leary and his car owner, Alex Bowman, brought a different chassis to Millbridge than the one he’ll race indoors next month in Tulsa, but they were still building on their notebook in advance of the marquee event.

“We left the Chili Bowl car at home and brought our outdoor car, and I’m kind of glad we did, because those two races were wild,” Leary noted. “Alex’s cars are always really fast, though. We came here to make sure the engine would run, mainly. With midgets, sometimes you can roll the dice on whether the engine will run or not, but these (Stanton) SR-11s have been really reliable for us the past few years.

“This is about a shakedown and making sure we don’t have any bugs going into the Chili Bowl, and I think it’s a good thing for a team like ours that doesn’t run as often as a lot of the outdoor teams do.”

As for Larson? After claiming his 46th dirt-track feature win of 2020 to close the year, the Elk Grove, Calif., is arguably in as good a position as he’s ever been going into his 14th Chili Bowl attempt.

“Winning never hurts to build momentum,” he said. “This is a great way to end the year and I look forward to (the) Chili Bowl and then getting back into the Cup stuff (with Hendrick Motorsports).”

sportsgamingwirehttps://sportsgamingwire.com
As an Editor and an Sports Geek, it's my pleasure to share my knowledge about Sports and their various aspects that can impact our lives.
Previous articleGame Of The Year Countdown – #10 Immortals Fenyx Rising
Next articleChampions League last-16 draw: Barcelona tackle PSG, Liverpool land Leipzig, Chelsea face Atletico Madrid