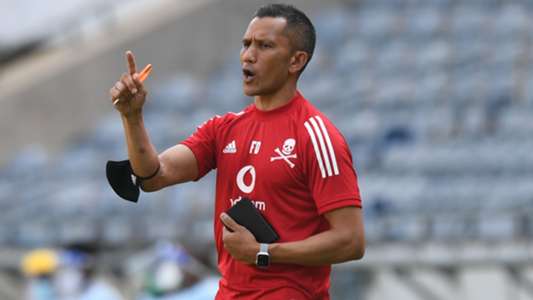 Pirates are in high spirits after edging Bloemfontein Celtic 2-1 last Saturday to lift the MTN8 trophy, their first piece of silverware since clinching the 2014 Nedbank Cup.

“Of course coming from a fantastic MTN8 victory, lifting the Cup, we are really proud of our players,” Davids told Pirates media.

“I thank our supporters for being behind us. But quickly we have to put the celebrations on hold because the next target is already staring us in the face. That next target is the league and it starts with Chippa United at Orlando Stadium.”

Currently placed sixth on the PSL standings seven points behind leaders Mamelodi Sundowns, a win for Pirates could see them climb as high as third if Baroka FC lose to Celtic on the same evening.

The Buccaneers face a Chippa United side which is struggling for form and sitting fourth from bottom, four points ahead of basement side Maritzburg United.

While Pirates are fresh from tasting cup success, they are however keen to recover from dropping four points in their last two matches which ended in draws against Baroka and Cape Town City.

“Our last league match against Cape Town City we did not get what we deserved for all our chances, for our dominance,” Davids said.

“Not getting the result that we wanted but still coming back home with a 2-2 draw. So we now know that the Chippa United game is a match when we can rectify that, converting our chances is the main key focus for us to be able to collect the three points.”

Pirates’ last four games across all competitions have also seen them coming from behind to avoid defeat.

The Buccaneers are yet to lose a match this season and the last time they tasted league defeat was during the PSL bio-bubble in August when they lost to Cape Town City.

In all competitions, they have gone for 13 consecutive matches undefeated.

sportsgamingwirehttps://sportsgamingwire.com
As an Editor and an Sports Geek, it's my pleasure to share my knowledge about Sports and their various aspects that can impact our lives.
Previous articleWhat can Callum Smith do to beat Canelo Alvarez?
Next articleValorant’s winter mode Snowball Fight kicked off yesterday