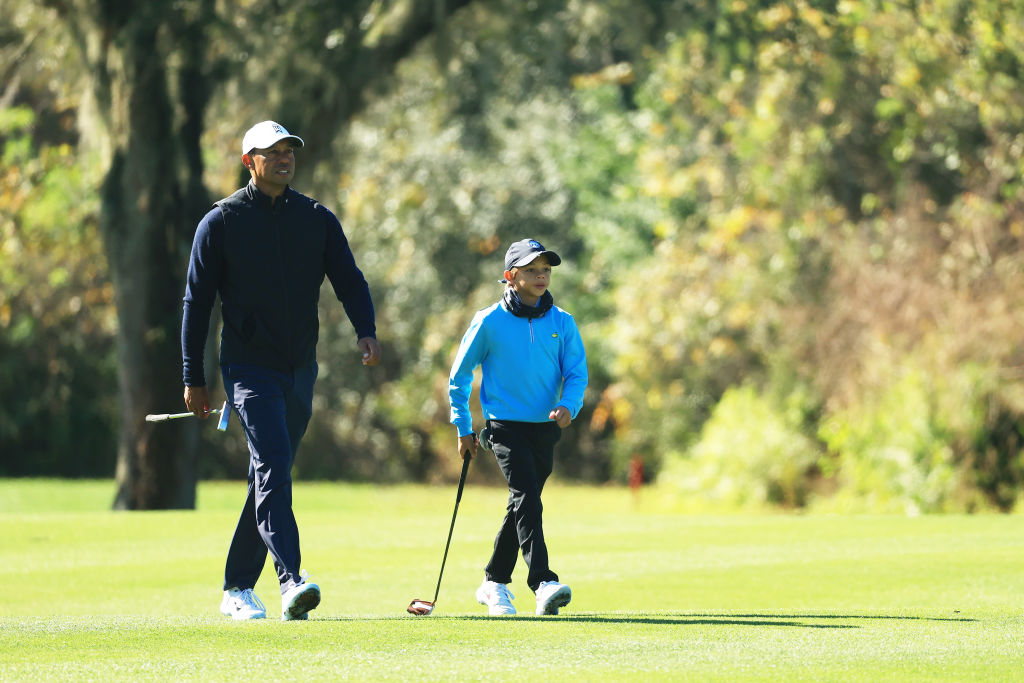 Tiger Woods and his 11-year-old son Charlie are gearing up for their first participation in the PNC Championship, a father and son or daughter tandem golf event, and social media could not just get enough of them. (Photo : Mike Ehrmann/Getty Images)

Tiger Woods and his 11-year-old son Charlie are gearing up for their first participation in the PNC Championship, a father and son or daughter tandem golf event, and social media could not just get enough of them.

Five-time Masters tournament winner Tiger Woods took his time to practice in the Ritz-Carlton Golf Club Grande Lakes ahead of the PNC Championship when the social media put his 11-year-old son on notice.

Charlie Woods was imitating his father as he looked to him back and forth, left and right, then back to him to swirl his club.

Current World No. 3 Justin Thomas admired how Charlie already got a good hold of his chirping. He described Charlie’s way to be a ‘competitive’ type for a child of his age.

“Charlie was leading going into the last hole. Charlie is mouthing off, ‘Here I am a 9-year-old beating the No. 1 player in the world and supposedly the best player of all time.’ He three-putted and I made it. Shut him up pretty quick,” Thomas said.

On Saturday, Tiger Woods and Charlie will participate in the 36-hole event of the PNC Championship, wherein they expect to meet 19 other father-son tandems. The Father-Son Challenge is an annual golf event aiming to showcase the bond between fathers and sons or daughters in playing golf.

For Tigers Woods’ first time experience in the PNC, he has yet to enjoy this rare competition after several serious matches that he previously played.

Charlie Woods was Tiger’s perfect copycat. From the Nike attire, the similarities were striking between the two. The viral video of Tiger and Charlie seemed to drive Twitter by a storm, as the two teed off all at once – a pair in sync.

Comparison resounded on social media, but Tiger Woods said that he would see to it that he will let his son take his own pace to learn golf.

Tiger saw a lot of fun in Charlie playing golf. He mentioned that Charlie has been playing junior tournaments and letting people take a video of him. More importantly, he reminded Charlie to feel no pressure and take his time in playing the sport.

Padraig Harrington, the three-time major titlist and Woods’ rival, took some time to comment on how Charlie can oust his father in no time.

The 49-year-old golfer found out that Tiger turned professional before him or around the same year as him. He told the reporters that the PNC tournament was for Charlie, and Tiger was not the star of the upcoming show.

The Irish golfer added that Woods should better take note of his role in this competition. He stated it is Charlie’s game now, and it appears to be a ‘Move out of the way Tiger’ show to the audience.

Something noteworthy to jot down is how Tiger’s father, Earl Woods, taught him to play golf from the start. Earl was seen as an epitome of a sports dad who accompanied Tiger Woods in all his competitions. He was born to bring out the best in Tiger.

What sets them different from one another is that Earl Woods is loud for his son’s prominence in golf. With Charlie, Tiger’s approach is opposite by limiting Charlie’s public presence.

Even so, the lives of the athletes and celebrities are cloaked in mysteries and secrets. The 2009 downfall of Tiger Woods in a scandal proved how people see the celebrities’ real lives from those that are borne out of television.

From Charlie’s imitation of his father’s idiosyncrasies, including his perfect club twirls and trash talks, we have yet to assume what’s coming next for Charlie.

Tiger’s son has endless possibilities. He could be the greatest golfer one day like his father, or he could be the other way around.

sportsgamingwirehttps://sportsgamingwire.com
As an Editor and an Sports Geek, it's my pleasure to share my knowledge about Sports and their various aspects that can impact our lives.
Previous articleInterMat Wrestling – Bajrang tops Green to win Flo 8-Man Challenge at 150 pounds
Next articleOn this Day: Unbeknownst to Floyd Mayweather, Angel Manfredy makes more money than him for their fight