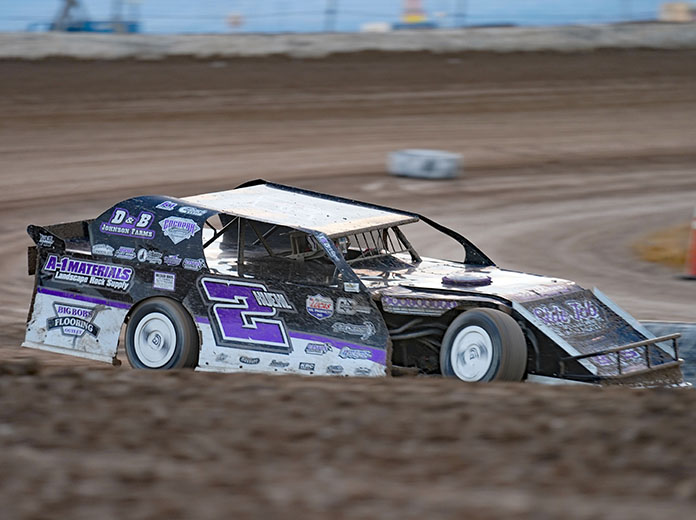 CAVE CREEK, Ariz. – The most consistent driver of the Arizona Dirt Track Tour for Karl Kustoms Northern SportMods will hang his first IMCA championship plaque on the wall.

Taylor Kuehl wrapped up the title with sixth- and seventh-place finishes in the final two tour events, at USA Raceway.

“Winning the tour was really exciting. We didn’t expect to be in the running until the last two days,” said the second-year SportMod competitor from Cave Creek, Ariz. “Unfortunately we didn’t get any (feature) wins but we were consistent.”

Kuehl logged 18 pre-pandemic starts in her home state. She relocated to Montana to work on a farm in the summer, getting in another 10 races in North Dakota and Wisconsin before heading to Boone for the IMCA Speedway Motors Super Nationals fueled by Casey’s.

Her father Chuck raced and now serves as crew chief and mentor to Kuehl and brother Austin, who drives an IMCA Modified.

Kuehl won the Arizona Ticket to the World Finals and was one of just three female drivers from across the country to compete in New Orleans during her asphalt go-kart career. She collected rookie of the year honors in a modlite class before moving up to the IMCA SportMod division.

“I’ve learned a lot from my dad and from other drivers,” said Kuehl, eighth in Lady Eagle point standings. “I got to race with and talk to a lot of good drivers this year. That’s going to make me a better driver.”

sportsgamingwirehttps://sportsgamingwire.com
As an Editor and an Sports Geek, it's my pleasure to share my knowledge about Sports and their various aspects that can impact our lives.
Previous articleFootball on TV this week: Matches to watch & live stream in UK today, tomorrow & this weekend
Next articleEditor’s Pick – Gerry Cooney: ‘Four punches from death!’ I still don’t like to watch that fight today