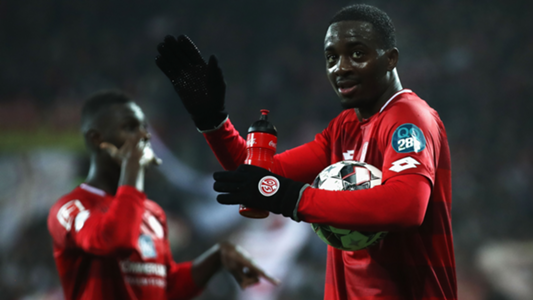 Following his impressive performance in the German elite division so far this season, the striker of Congolese descent has joined the Eagles

The former France U19 and U21 star of Congolese origin enjoyed a sweltering start to the 2020-21 season with the Bundesliga outfit – finding the net ten times in 17 appearances across all competitions.

His presence at the Selhurst Park is expected to reinforce Roy Hodgson’s attack in their quest to challenge for a place in Europe next season.

The 23-year-ol expressed his delight joining the Eagles, while disclosing that he is ready for the challenge ahead.

“[Playing in the Premier League] was my dream when I was a child. Now I can play, I will show the fans of Crystal Palace what I can do.

“I spoke with him [Hodgson] over the phone but I want to speak with him face to face. [He spoke] French – good French. I know this manager is a good trainer with a good team.

“I have some friends who play in the Premier League and say it’s very intense physically. It’s hard but I will see!”

In the same vein, Palace chairman Steve Parish is glad Palace signed the striker, claiming his arrival resonances the club’s commitment towards having a well-balanced squad.

“We have followed Jean-Philippe’s development with keen interest for some time, and I’m so pleased that we have been able to bring him to south London.

“He is a player that is full of potential with a proven goal-scoring record, and his signing reiterates our commitment to ensuring we have a well-balanced squad in terms of youth and experience for the seasons ahead.”

Following his inability to tie a regular place at the Groupama Stadium, he was loaned to Le Havre before he teamed up with Mainz in 2018 on a four-year-deal. There, he established himself as a regular in the German topflight, scoring 27 goals in 71 games which included a treble against SC Freiburg on November 22, 2020.

sportsgamingwirehttps://sportsgamingwire.com
As an Editor and an Sports Geek, it's my pleasure to share my knowledge about Sports and their various aspects that can impact our lives.
Previous articleOn This Day: After being conned by his manager Roberto Duran turns in the performance of his life to defeat Esteban DeJesus
Next articleTrump permanently banned from Twitch