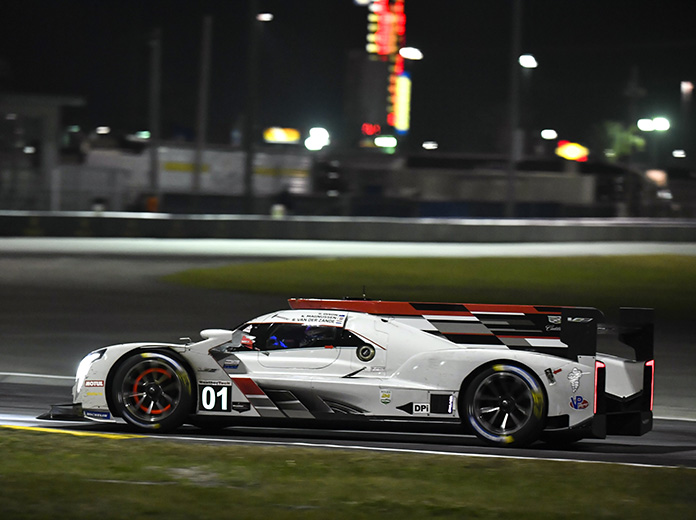 Renger van der Zande was at the wheel of the No. 01 Cadillac DPi as night turned to day, though he had plenty of competition close behind him. The eighth caution of the race had allowed the rest of the pack to close in on him and the restart saw drama for the No. 48 Action Express Cadillac DPi.

Driven by two-time Rolex 24 champion Kamui Kobayashi, the No. 48 entry rocketed from fourth to second during the restart. He attempted to challenge van der Zande for the lead only to spin out entering the first turn, dropping him several seconds behind the leaders with less than half of the race left.

That left Helio Castroneves, at the wheel of the No. 10 Wayne Taylor Racing Acura DPi, running second. He was four seconds behind the No. 01 Ganassi effort, with Dane Cameron in the No. 60 Meyer Shank Racing Acura DPi next in the running order.

Tower Motorsport’s No. 8 Oreca is in control of the LMP2 class, with Gabriel Aubry holding a one-lap advantage over the No. 18 Era Motorsports Oreca driven by Paul-Loup Chatin.

The lead was even greater in the LMP3 division, where Oliver Askew holds a commanding five lap lead in the No. 74 Riley Motorsports Ligier JS P320. Joao Barbosa currently runs second in the class in the No. 33 Ligier JS P320.

Oliver Askew has taken over for Spencer Pigot in the No. 74 Riley Motorsports Ligier JS P320, which leads the LMP3 class by five laps over the No. 33 Ligier JS P320 of Joao Barbosa.

GT Le Mans saw the Corvette Racing program battling with BMW Team RLL in the early morning hours. After leading for most of the hour, the No. 25 BMW M8 of Connor De Philippi was overtaken by both Corvettes, with Tommy Milner in the No. 4 leading Antonio Garcia in the No. 3 and De Philippi by only a few car lengths each.

Lastly, Winward Racing’s No. 57 Mercedes AMG GT3 with Marco Engel at the wheel was out front in the GT Daytona class by nearly 18 seconds over the No. 21 AF Corse Ferrari 488 GT3 driven by Simon Mann.

sportsgamingwirehttps://sportsgamingwire.com
As an Editor and an Sports Geek, it's my pleasure to share my knowledge about Sports and their various aspects that can impact our lives.
Previous articleATK Mohun Bagan vs Kerala Blasters LIVE: Follow ISL clash in real time
Next articleBilly Joe Saunders in line for Canelo Alvarez