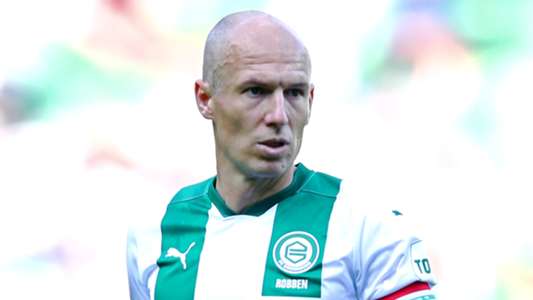 Arjen Robben is considering retiring for a second time as injuries continue to scupper his fairytale return to Groningen.

The 37-year-old called time on his playing career at the end of the 2018-19 season with Bayern Munich, but returned to play for his boyhood club in the Eredivisie.

He made his comeback to try and help his old club survive the financial impact of the coronavirus pandemic but, while he has no doubt raised the club’s public profile, he has only played twice.

Robben was taken off just half an hour into his second debut with a groin injury, and has been kept off the field by calf problems since mid-October.

The former Netherlands star is desperate to play a part for his team this season but admits the fight with injuries is one he may not win.

“I am doing everything I can,” he told the club’s official website. “If you don’t get the desired result in the end, you might have to accept it, but it is very difficult.

“How is it going? At the moment, those are the questions you prefer not to answer. It is not going well, it is disappointing. I can’t dress it up more than that.

“I still have problems in both calves. It has gone from one to the other. One of them got better at a certain point, then I started having problems with the other. At the moment it is very difficult. We have to see if there is a chance for things to get better again.

“It’s just a very difficult decision. I said at the start: ‘I’m going to do everything I can, I’m going to do my best, but I don’t know if it will work’.

“At the moment it seems like it is not working, but somewhere the top athlete is still inside me. Giving up is not in my dictionary.

“That is now the phase I am in. I wonder if it is still realistic to keep going, to come back to the pitch and play matches.”

Robben is confident at least that he has done all he could to make his comeback, but a final decision will have to be made at some point.

“Maybe I will just have to say: it has been great, it is very unfortunate, but at least we have done everything we can. That is just the case. We do everything we can, we put a lot of energy into it, not only me, but everyone within the club.

“At the moment I am not saying that for the full 100 per cent: we are going for it. I am kind of in a phase where I am floating in between.

“I have to take it easy to give it time to heal. But at a certain point, I will have to make a choice: if we continue with this, you have to make a plan how the recovery will work out. There will be more clarity in a few weeks.”

sportsgamingwirehttps://sportsgamingwire.com
As an Editor and an Sports Geek, it's my pleasure to share my knowledge about Sports and their various aspects that can impact our lives.
Previous articleEditor’s Pick: Behind the Scenes with The Executioner, Bernard Hopkins
Next articleEwart Potgieter – Bigger than Valuev

MAKING history, or “herstory”, as she calls it,...
Read more
Load more