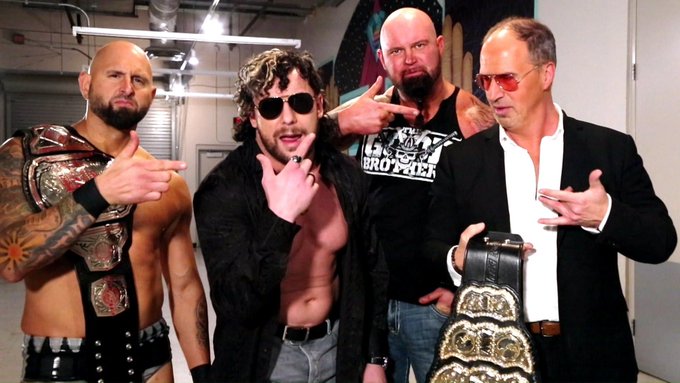 “Be bold and mighty forces will come to your aid.” – Johann Wolfgang von Goethe

Impact Wrestling’s pay-per-view, Rebellion, played host to a history-making contest on Sunday, April 25th, 2021. Two major North American wrestling promotions fielded their champions in a Title vs Title match for the AEW World Heavyweight Championship, as well as the Impact Unified World Championship. Rich Swann would represent Impact Wrestling, and the home-turf advantage. Kenny Omega would represent All Elite Wrestling, on his quest to continue to change the wrestling world. This is history-making, in that we haven’t had this sort of Champion vs. Champion dynamic on this sort of stage since the era of the fabled territories. And here, in the 21st century, two champions from two nationally televised promotions would face one another. In the end, Kenny Omega would stand tall adorned with the AEW World Championship, as well as the two title belts that represent the Impact Unified World Championship. Some may say that the result, and the road that led to it, in some way diminished Impact Wrestling, or its champion. I would not share that opinion.

There have been some criticisms regarding how this match was built on the AEW side. Aside from passing mentions, there had been no real promotional effort on AEW television to drive viewers to Rebellion. Not counting a pay-per-view commercial during an ad break on the April 21st episode of Dynamite, there has not been any Impact-branded imagery to be found on AEW television since the Good Brothers lost the Impact Tag Team Titles several weeks ago.

In contrast, Impact’s build to Rebellion in general, and their framing of the match between Swann and Omega in particular, would be nothing short of historic. It was emphasized in multiple ways across many episodes of Impact that the notion of a Champion vs Champion match, winner take all, is something most fans, and indeed wrestlers themselves, haven’t seen in their lifetimes, and it’s something that they may never see again. Several of their top talents had vignettes commenting on their views of the upcoming contest and its competitors. Impact Wrestling also produced compelling web content to promote the Swann/Omega match, bringing in Mauro Ranallo to not only narrate intriguing web pieces on the combatants, but to call the match itself at the very event. For Impact, it was clear that the match of Kenny Omega vs. Rich Swann is the biggest thing to happen to them in a long time.

As I look at the build for the match between AEW and Impact, it provides the foundation for why I think this rivalry between Swann and Omega, and even its current status quo, works. The contrast we see between AEW and Impact is an honest one. Even in the strange backdrop that the pandemic has provided for professional wrestling, the scale in presentation between AEW and Impact are leagues apart. It would be disingenuous to try to paint Impact as AEW’s equal, and any attempt to do so would result in a loss of credibility when one only need to rely on the eye test to see it isn’t so. Instead, we have AEW, and their proxies in the Impact canon: Tony Khan, Jerry Lynn, and Tony Schivone as intruding big shots, throwing their weight around where it’s not wanted. This manifests in AEW’s paid ads that run regularly on Impact programming, and various cameos – be it in press conferences, or at ringside. Meanwhile, Impact is the promotion that is fighting tooth and nail back to prominence after a history of highs and lows. And right now, the lows are significant: no crowds, piped in “audience” reactions, all compounded by a limited production value. But this is also a company with history and heritage. The legacy of Impact is one of champions across the globe – a company once on the cusp of greatness that aspires to be again.

So as I look at the roles AEW and Impact Wrestling play as organizations in the mosaic of Kenny Omega and Rich Swann’s story, it makes sense to me why AEW downplays Impact by not offering them much daylight on Dynamite or other AEW programs. Why should they? Impact isn’t on AEW’s level from that perspective. Now when we remove the lens of kayfabe, it’s not nearly as good for business for AEW not to have taken more of an active hand in promoting Rebellion, and with the smallest of allowances, generate buzz and excitement. But that’s not one of my overall considerations as I think just of the tone and themes of the story that have coalesced around Omega and Swann. Rich Swann isn’t just fighting for himself or for his title. When there are sit-down interviews with top heels and babyfaces on the Impact roster all stating that they’re pulling for a Swann victory, it’s clear that Rich Swann is fighting for his entire promotion, against an invader with not only a laundry list of personal accolades, but backed by a big money brand that’s not above casually talking about how they can buy Impact at any moment.

I’ve seen a divergent range of opinions regarding the match. Personally, I loved it, and thought that even with the flaws and errors that took place, they fed well into the overall story between these two champions. I felt that it told not only a compelling story, but one that casts Impact in a favorable light, while it lays a foundation to build from in the future.

In the vignettes and videos that helped build to this match, Rich Swann was painted as an underdog who needed to fear the One-Winged Angel, Omega’s vaunted finisher. However, striking and speed were in Swann’s favor and keys to his victory, citing previous encounters the pair had in recent six-man tags. And as the competitors entered the ring, Omega’s introduction was given heightened pomp and circumstance by the sycophantic “Invisible Hand,” Don Callis. In spite of a lack of crowd, with Mauro Ranallo added to the commentary booth, as well as Rich Swann brandishing the double belts of the Impact Unified Championship, it gave everything a big match feel.

As the match opened, we saw Swann start off fleet of foot and looking to take the fight to Omega early. The initial flurry was effective and allowed Swann to get the better of Omega, reversing Kenny’s initial grappling attempts, as well as getting receipts for any signs of arrogance, belittling, or disrespect. In the opening phase of the match, Swann showed that he could match Omega, and indeed Kenny found himself on the wrong end of more exchanges than he’d prefer.

It wasn’t until Swann started to get comfortable in his offense that Kenny would turn the tables. A running frog splash, a staple of Rich Swann’s offense once he’s found his match rhythm, was what gave Omega his opening. By bringing up his knees, Kenny robbed Swann of his momentum. With Omega’s undebatable skill, combined with a ruthlessness unleashed in the advent of his AEW championship run, he was brutal and cruel during his control segment against Swann.

Of course, Omega would eventually make a mistake. Swann would handstand out of an attempted Kitaro Crusher, giving him the opening he needed. And in spite of Omega’s attempts to beat Swann down in response, Swann was fueled with a greater purpose and his fighting spirit helped him shrug off Omega’s blows. But this is where we would find the difference between the Impact and AEW Champions. It was Rich Swann’s push toward a victory over Omega that would wind up underscoring the story of this match.

There is a moment where Kenny has taken Swann as the most serious of competitors and begins the complicated steps to set up the One-Winged Angel, but not any ordinary execution of the move. It was an attempt to execute the maneuver elevated from the ropes. Rich Swann would struggle, and attempted to reverse with a poisonrana.  Unfortunately, the counter did not hook Omega, and Swann had to settle for an impromptu roll-up. This is Rich Swann’s unforgivable mistake against a competitor like Omega.  Had he landed, he’d have been in the perfect position to initiate his most hard-hitting offense.  Instead, Omega had the opening to begin the punishing closing sequence that would finish the Impact Unified Champion.

Some may say that it was Omega using cagey tactics with the referee to distract Swann that cemented his win, but no, it was the failed poisonrana counter. This was a story of an underdog champion, representing an underdog promotion, and they both knew that they were fighting from underneath. Their promotional themes conveyed as much. And as the match developed, their  champion showed that on offense he was as much a match f0r Kenny Omega. And as far as resilience, he’d weathered Omega’s early storm. Rich Swann, as Impact Wrestling Champion, fought with a strength and ability that highlighted not only himself, but the company he wrestled for. But as can happen with an underdog with everything on the line, he made one mistake. One mistake that Kenny Omega didn’t make. And that was where Omega began using the deeper move set, like the Jay Driller, that he only uses in the biggest of spots. This was followed with a sadistic number of V-Triggers that would give the final opening of the One-Winged Angel.  It was that failed poisonrana–which if it would have hit, would have combo’d into a pin–that Omega began to take Swann with the utmost seriousness; the same seriousness he faced Okada with.

Watching Kenny Omega get draped in gold at the end of Rebellion was, undeniably, a moment–A moment that Impact can claim as its own. And as a fan, it was a moment that I found made my heart race. As I sat after the match, collecting my thoughts, I wondered that for as strong of a showing that Swann had, should Omega have won so decisively? It wasn’t long before I concluded that it was the right finish, not only for the moment, but for the future.  In the moment, it would have strained credibility for Impact to finagle a victory against the greatest in the world when one looks at the current house that Impact has built and can easily see that they’re not even close to being the big time. But instead, they fought with heart and gallantry, and they showed they could hang with the best, if not for a small mistake exploited to maximum effect. For the future, Kenny Omega is the best champion that Impact could have ever hoped for: A marquee player that they’d have never been able to sign on their own, no matter how many championships were promised. Now they can use his star power to elevate Impact Wrestling, as well as everyone on its roster who gains a greater exposure by being near the light Kenny Omega shines. Impact now has an uncharted, but believably bright future ahead, if they’re bold enough to take it.