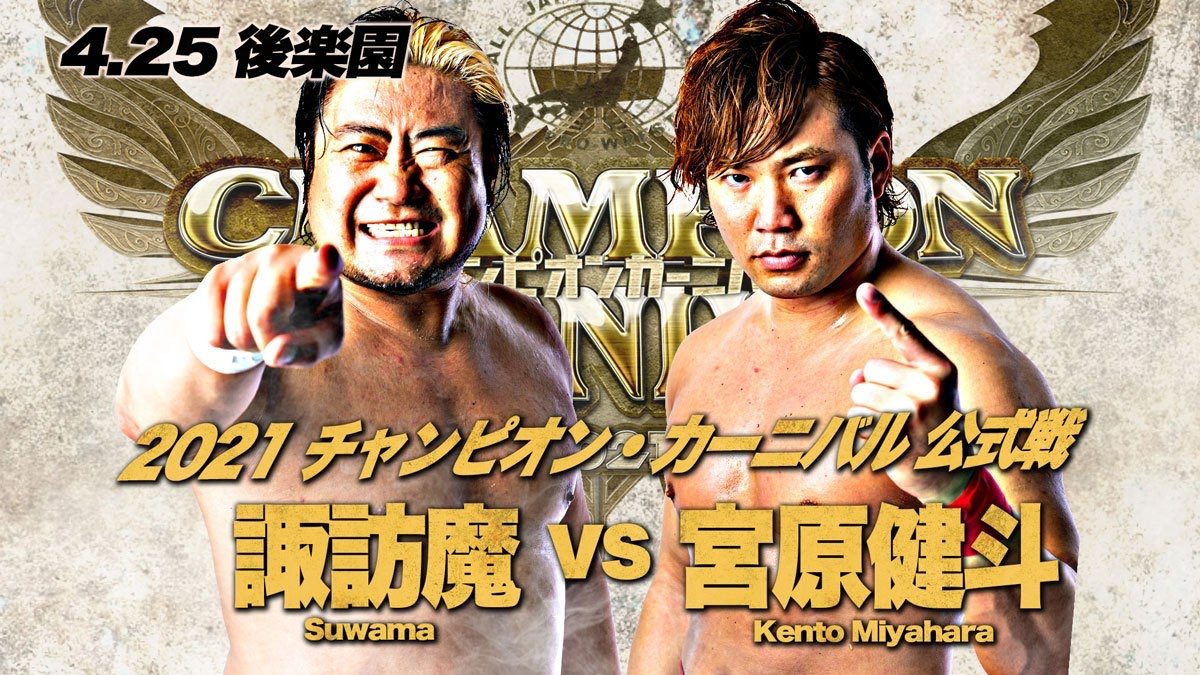 This began with grappling and unsurprisingly, Ashino went after the ankle. Otani got in some slaps, but Ashino was in control the majority of the early part of the match. Like earlier in the pandemic during the empty arena shows, All Japan has its staff and wrestlers sitting in the audience making noise. To hear people making noise for Otani’s face wash spot was something nice to hear after all this time.

Otani looked like he might have won this match after lots of slaps and kicks but Ashino fought back and got the Ankle Lock applied for the submission victory. While I appreciated the crowd making noise for the spots in this match, I felt that it lacked an overall focus and did not seem as hot as Otani’s previous matches in this tournament. But the crowd noise certainly made this into something decent. Otani also gets bonus points for limping to the back after the match, selling the submission. ***

The Twin Towers explode! These guys slapped each other really hard to start, and Ishikawa even did a Double Foot Stomp off the apron on to Sato who was lying on the floor outside. Back in the ring, Ishikawa worked over Sato some more before Sato finally gained some momentum. They then had a back-and-forth, trading some power moves and strikes before Sato managed to slap on La Magistral for the three count. I did not expect a match between these two to have ended like that. However, given that these guys are showing their age these days, this was a pretty good match, with stiffness and some big moves. ***1/4

This was not a Champion Carnival match obviously, but it’s getting a review because it was a title match.

Early on, Sato managed to ground CIMA, and worked over his left arm. This turned into the story of the match, as Sato went after it relentlessly. CIMA then targeted Sato’s left leg with Dragon Screws and low dropkicks. CIMA sold his arm well throughout the match which was a plus. There was a great spot where CIMA went for a Meteora but Sato countered and rolled through into an Ankle Lock. The finishing stretch was really fast paced. Sato had CIMA in a Cross Armbreaker but CIMA managed to fight out of it into a roll up for a near fall. CIMA then tried to get the win with various cradles and flash pins, with Sato trying to fight back until CIMA got a modified cradle move I don’t know the name of for the three count. CIMA succeeds in his V2 defense. This was great, and edges out CIMA versus Koji Iwamoto as CIMA’s best match in All Japan thus far. After the match CIMA continued to sell the arm like it had really been injured. CIMA and Sato also shook hands, bowed and Sato put the title on CIMA in a classy move. After CIMA cut a promo, Iwamoto came out to challenge, which I’d bet will happen on 5/16 at Ota Ward Gym. ****

In somewhat of a weird structure, this started with Zeus–who is the de facto babyface here–beating down Lee and working over his back after ramming it into the ring post while fighting on the outside. It was good, but also weird to have Lee work underneath like that, especially early on. In the first half of the match, Lee also got little more than a couple of offensive spots. After taking quite a beating, Lee finally got some sustained offense with a bunch of knee strikes. After some back-and-forth, Lee hit the running knee to the back of the head and then the D4C for the win. Good match overall, but the weird structure keeps me from going any higher on the rating. You could also call it disappointing given what these two are really capable of. ***1/2

This was a condensed version of their usual style of match. They went straight to strike exchanges almost out of the gate and were fighting on the floor two minutes in. Suwama did the same spot as in the last match where he picked up Miyahara and rammed him into the ringpost while on the outside. Suwama then took control of the match for an extended period, targeting–you guessed it–the back, though the work on the back did not last as long as it did in the previous match. Miyahara made his usual comeback with lots of knee strikes. I felt the match was a little too paint-by-numbers, especially from Miyahara, but the closing stretch really ramped things up. Suwama hit a superplex at one point, but Miyahara kept fighting back. SUWAMA escaped from the Shutdown German Suplex, but then got caught in a second soon after and Miyahara got the win. This was far from their best match, but really turned into something very good by the end. ****

Yet another good show, though this one was really helped by the Jr. Title match. The main event delivered, though the semi-main was kind of disappointing. The other two Champion Carnival matches were passable.

While the state of emergency in the Tokyo area is unfortunate, at least All Japan knows how to do empty arena shows, and having people make noise for spots was something that was very welcome, even if it wasn’t a real crowd of fans.

Also announced earlier in the show is that the Saito Twins, Jun and Rei, both former sumo, would make their debut on the 5/16 show against Big Japan’s Yasufumi Nakanoue and Daisuke Sekimoto.