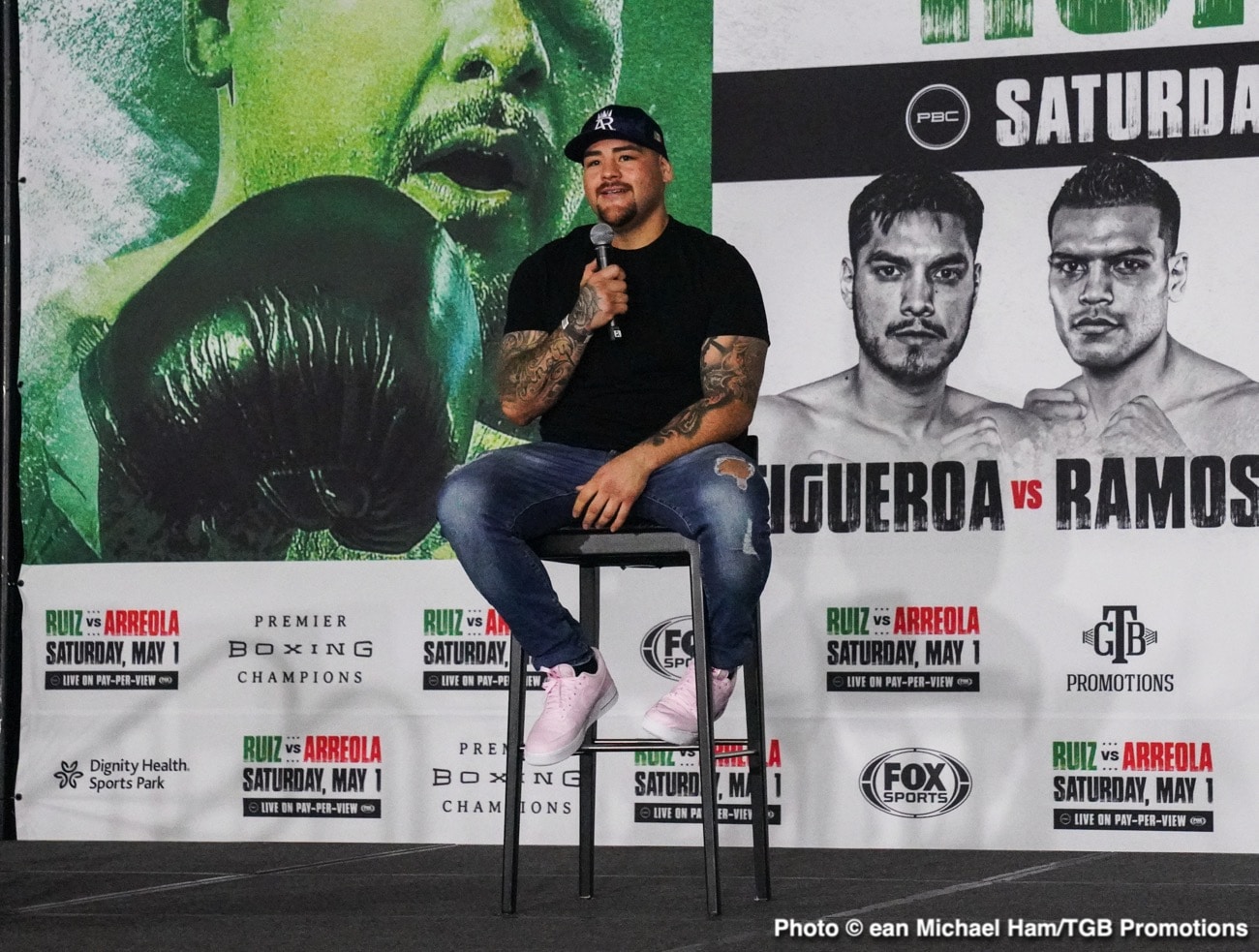 By Jim Strobridge: Andy Ruiz Jr weighed in at an ultra-trim 256 pounds on Friday at the weigh-in for his 12-round main event fight against Chris Arreola at the Dignity Health Park in Carson, California.

Ruiz’s weight is 27 lbs lighter than the 283 lbs that he weighed in for his last fight years and a half ago against Anthony Joshua in December 2019 in Saudi Arabia.

We don’t know how well Ruiz Jr will perform at this weight because he started at 310 lbs, not the 283 he weighed for the Joshua rematch in Saudi.

Has Ruiz lost too much weight?

Losing 54 lbs is an extraordinary number for a professional athlete to lose and try and perform at the level they were at in the past.

That’s why there’s a big question mark hanging over the head of Ruiz going into this fight.

While Ruiz looks in good shape, we don’t know if he’s in boxing shape to fight 12 hard rounds against a fighter capable of throwing over 1,000+ punches.

Chris Arreola at a career-low of 228

For Arreola’s part, he weighed in at a career-low of 228 1/2 lbs, which is an excellent weight for him. Arreola has been a pro for 18 years, and he’s never been this light.

Arreola showed that he could take the weight off using the old school trainer Joe Goosen, who doesn’t get the same fanfare as Ruiz’s trainer Eddy Reynosos Jr. but is every bit as good if not better.

While it’s great that Ruiz can trim down 27 lbs to 256, lost behind the scenes is the transformation Arreola has done with his own chunky frame.

You don’t see too many veterans that have been in the game as long as Arreola has in coming into their fights at a career-low.

What makes it more impressive is that Arreola doesn’t look weight drained at all. He looks in excellent condition, like an executive in a company.

Before today, the lowest weight that Arreola came in for one of his fights was 229 lbs for his match against Damian Wills in 2006.

Ruiz with a lot to prove

“Chris [Arreola] coming in the lightest shows that he put in the time,” said Mikey Garcia to Fighthype in talking about his 228.5 weight for the weigh-in on Friday.

“With a great trainer like Joe [Goosen], that makes for a better performance. I think Chris will try and take advantage o the opportunity in front of him, so I expect a great performance.

“At the same time, Andy wants to prove to everybody that it wasn’t just a coincidence or luck or fluke. He wants to make sure he gets that title shot again, and he’s got to get through Chris.

“I think that’s a recipe for a great match-up. Definitely, I think he can,” said Mikey when asked if he thinks that Ruiz can become a heavyweight champion again.

“He seems to be really disciplined; he’s slimmed down from 280-something [in the Anthony Joshua rematch in December 2019].

Mikey Garcia is getting ahead of himself by assuming that Ruiz Jr will win another world title at this point. He forgets that Ruiz still needs to prove that he can beat Arreola, who puts it on him on Saturday.

There won’t be a title shot given to Ruiz Jr right away if he beats Ruiz. He’ll still need to be a solid heavyweight like Deontay Wilder, Luis Ortiz, Filip Hrgovic, or Dillian Whyte to earn the fight against Joshua or Tyson Fury.

Ruiz is just hoping he’s given a title shot against Joshua right away after he beats 40-year-old Arreola, but that’s not how it works. Ruiz needs to prove himself against one of the top heavyweights to get a world title shot time around.