By Dan Ambrose: Former heavyweight champion Andy Ruiz Jr is back on the ladder to try and recapture his three world titles tonight when he takes on grizzled veteran Chris Arreola in a 12 round fight at the Dignity Health Sports Park in Carson, California.

Ruiz is making his first step in the journey tonight to get a title shot against Anthony Joshua or Tyson Fury when he takes on 40-year-old Arreola (38-6-1, 33 KOs) in the main event on Fox Sports PBC pay-per-view.

The 31-year-old Ruiz Jr looked like he’d come out of a fat farm on Friday to weigh in at 256 lbs, which almost 60 lbs lighter than the 310 lbs he weighed after his loss to Anthony Joshua in December 2019.

Taking the weight off is only part of what will need to be done for Ruiz to get back to where he needs to be. Now the weight is off; the 31-year-old Ruiz will need to show what he can do inside the ring tonight.

Like in other sports, fighters that lose a dramatic amount of weight the way Ruiz has are sometimes no longer effective. We see it all the time in every sport.

When athletes let themselves go physically, eating donuts, partying, and thinking they got it made, their careers are never the same. So while it’s nice that Ruiz had a ton of weight, that’s no guarantee of success.

Ruiz believes that his new trainer Eddy Reynoso will improve him from his previous one, Manny Robles, but that could be a vision that fails to live up to reality.’Reynoso is a good trainer but likely no better than any of the coaches that Ruiz has had in the past.

Ruiz back on the ladder

“I feel amazing from my last fight against Anthony Joshua. I had to make a change, and we’re here now,” said Ruiz to Max Kellerman’s Max On Boxing.  “we’re all motivated; we’re all on the same track,” Ruiz said about working out at Canelo’s gym with new coach Eddy Reynoso. “Atmosphere makes it so much different. 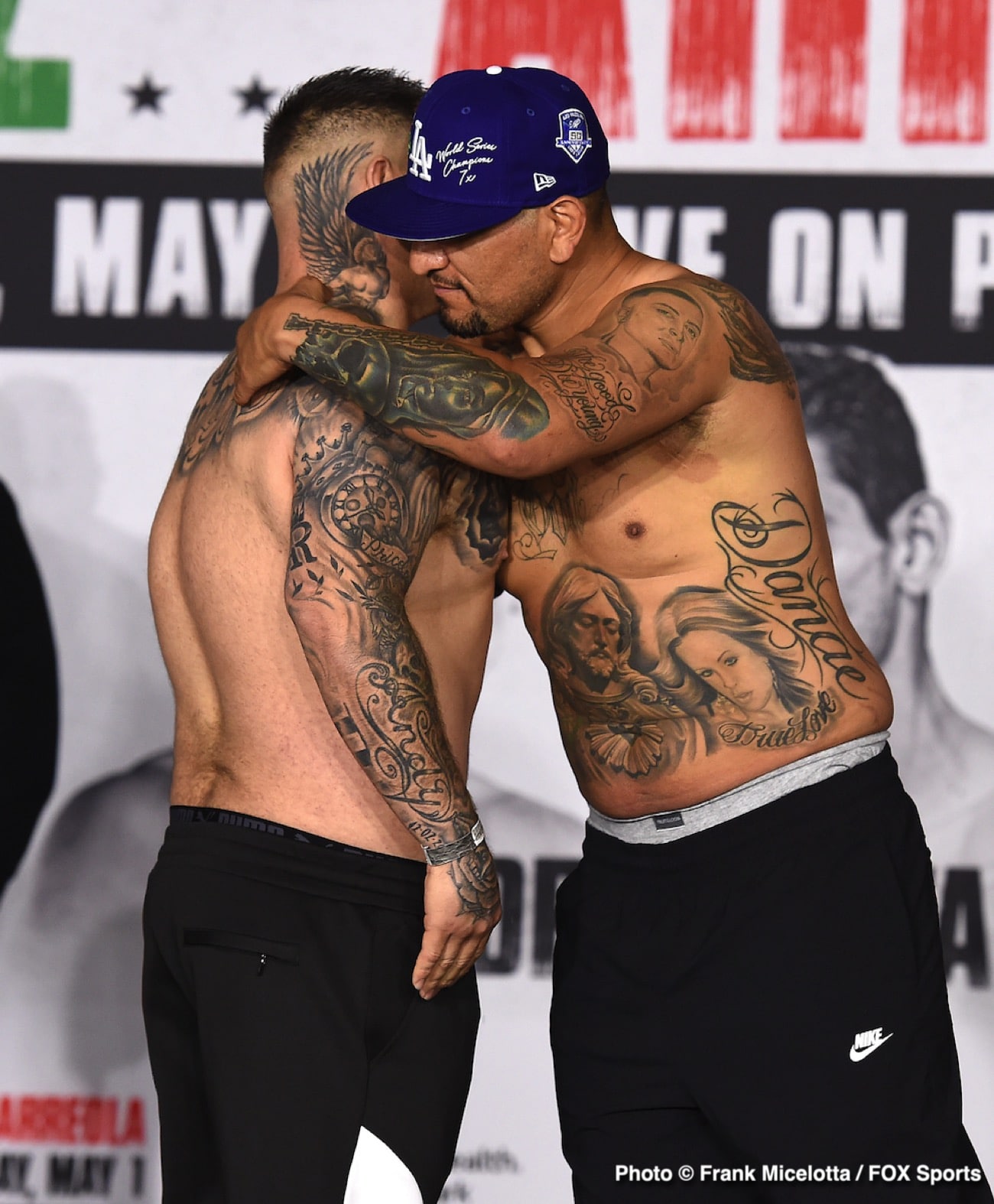 “Here, we’re at a whole different level,” Ruiz said about training with Reynoso. “We’re trying really hard. I’m ready to get back to the top. I know I got to get back on the ladder to get to where I need to be. I’m ready for whatever happens and what comes my way.

“In the meantime, you’ve got this fight with Arreola, and the one thing that strikes me is, what was the last time two big-name, Mexican American heavyweights were put in the ring for a high-profile fight? Said Max Kellerman.

“You’re obviously a big favorite because Arreola has never reached the level you’ve reached and is far removed from his prime. But I want your thoughts on what this match-up means?”

“It means a lot because I knew Chris Arreola when I was 16, and we sparred together, so there’s a bit of chemistry there,” said Andy Ruiz Jr. “But it’s going to be another history fight.

“There have never been two Mexican heavyweights ready to bang. Plus, the undercard is nothing but full Mexican people. So it’s exciting, and I’m excited, so I’m ready to give the fans what they want to see,” said Ruiz.

Fans will have a lot more respect for Ruiz if he elects to fight two or three quality heavyweights to earn a title shot against the Joshua vs. Fury fights winner rather than using a win over Arreola to start calling for a title shot.

These would be good options for Ruiz:

Arreola standing in front of Ruiz

“It should be a brawl for as long as it lasts; you’re a big favorite for a good reason,” Kellerman said of Ruiz. 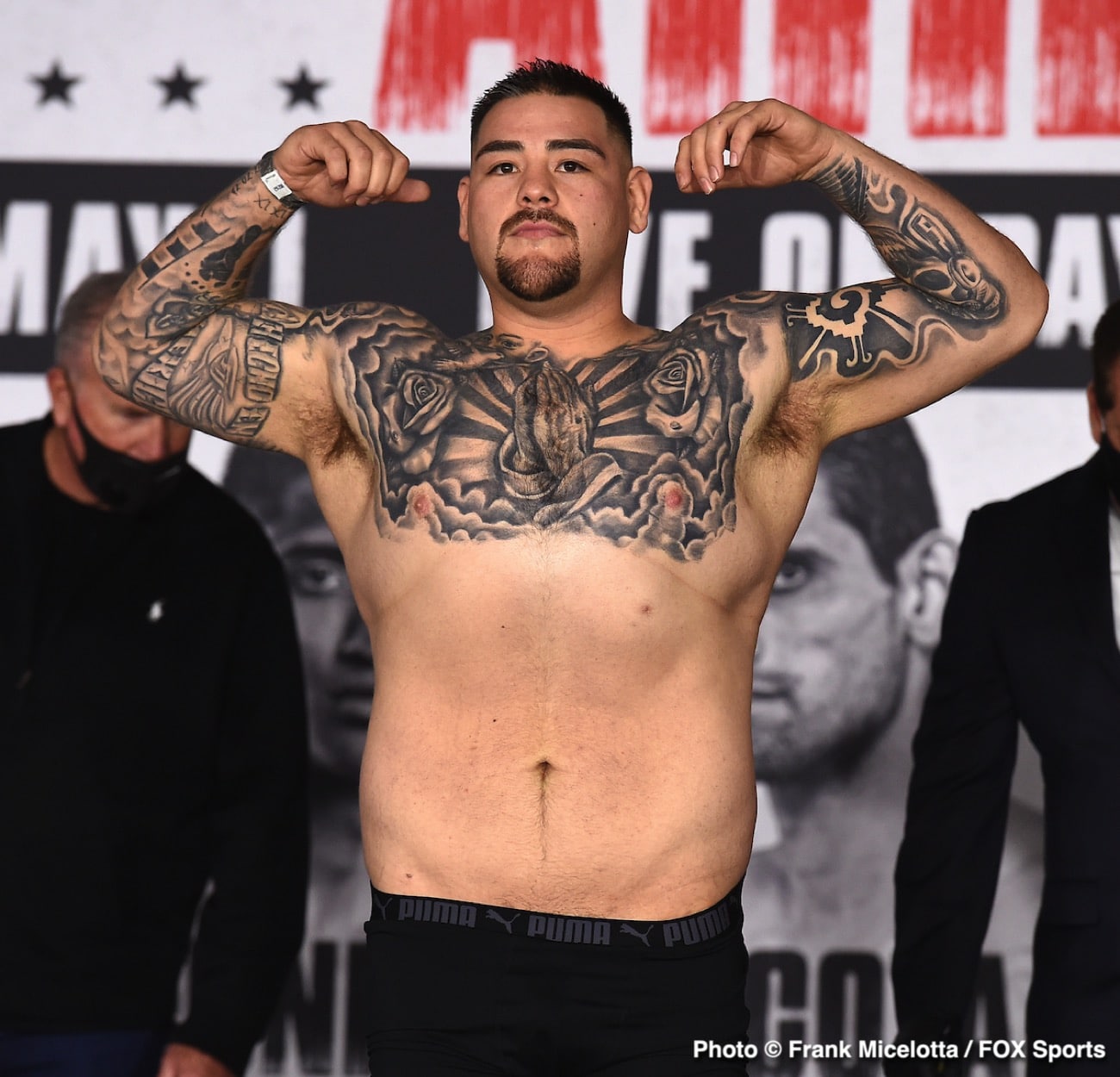 “He was the lineal champion, and he’s now seen as the best heavyweight in the division. There’s talk of him and Anthony Joshua getting it on.

“And in your comeback, is it important to you to be considered as the heavyweight champion again?

“In other words, is it enough to win a belt, have a third fight with Anthony Joshua, or do you feel the need to beat the guy [Fury] that everyone considers being the best heavyweight in the division?

“In other words, whatever the promotional issues are, do you feel you’ll need to fight Tyson Fury should he beat Anthony Joshua?”

“I think that would be an amazing fight,” said Ruiz about a fight between AJ and Fury. “Anthony Joshua will have problems with Tyson Fury for those belts, but first, I have Chris Arreola on my mind.

“I need to get rid of him for me to get to them. I’m glad I’m in better shape,” said Ruiz.

It would be a major shock if Arreola could beat Ruiz tonight, considering he hasn’t done anything with his career in many years.

Arreola’s last significant win was nine years ago against Eric Molina in 2012, and that was back when Eric was first starting.

“Not in terms of how you look in the ring but how you perform in the ring, how would that affect it because when I saw you coming up the ranks, I was like, ‘Boy, this guy has got quick hands,’” said Kellerman of Ruiz.

“But more than quick hands, you don’t see heavyweights move as fluidly, as naturally as you, and put as many punches together. Normally, that’s a lighter-weight fighter.

How does being in better shape, what new product will we see in Andy Ruiz? Be specific, what am I looking for?” said Kellerman.

“Before I had speed, I had movement, but I couldn’t really bob & weave too much because I had this gut always there,” said Ruiz. “Imagine what I could do 20 lbs less.

“I could move faster; I could bob & weave, I could slip the punches, make them miss, make them pay, and that’s exactly what we’ve been working on.

“In sparring, I had the same sparring partners as I had before, and they’re like, ‘What the hell happened to you? It’s hard to get to you; you hit harder.’

Sparring is one thing, but it’s not a barometer of success, particularly if the people your training with are being nice for a reason.

We won’t know if Ruiz improves until we see him in the ring with a good fighter, preferably a top-five fighter. Ruiz’s management’s decision to put him in with 40-year-old Arreola is obviously a calculated move to make him look good so that there will be a lot of buzz about him.

Ruiz and management likely want him to be given a title shot right away after beating Arreola without taking a risky fight to earn the shot against Deontay Wilder, Filip Hrgovic, Luis Ortiz, or Daniel Dubois.

The money will be so good for Ruiz in fighting for a world title; it won’t matter if he loses again. His bank account will swell by another $5 million, and he continues to buy huge houses and expensive cars. The cycle repeats with Ruiz being matched against Arreola-tyle fighter to get another quick title shot, which he’ll likely lose.

Ideally, it would be great if Ruiz actually earned his title shot and showed improvement in his game by taking on elite-level heavyweights instead of being given a title shot after being an old over-the-hill guy like Arreola.

I don’t see that happening here, though, because there’s too much risk of Ruiz losing, and then he’d miss out on all the money he’ll get from fighting Joshua again.