By Scott Gilfoid: Derek Chisora is refusing to hang up the gloves to retire following his 12 round split decision loss to Joseph Parker last Saturday. Chisora was totally bent out of shape after suffering his 11th career defeat in the headliner on DAZN and Sky Box Office.

There’s a right way and a wrong way to deal with a defeat, and boy did Chisora give a good example of the wrong way with his nonstop whining after the fight.

The 37-year-old Chisora (32-11, 23 KOs) was apoplectic following reading of the judges’ scorecards for his fight against former WBO heavyweight champion Parker (29-2, 21 KOs) at the Manchester Arena in Manchester, England.

Chisora got on his soapbox at the end of the fight and was fine form, bellyaching about how he’s NOT going to retire from boxing and this and that. I don’t know what the big deal was.

The one judge that scored it wide in Parker’s favor gave Chisora room to gripe and point fingers. If not for that, he’d have to nothing to grumble about.

“I was putting in more power punches, inside work, but I can’t get upset anymore,” Chisora said a still out of breath to Sky Sports Box Office after the fight. 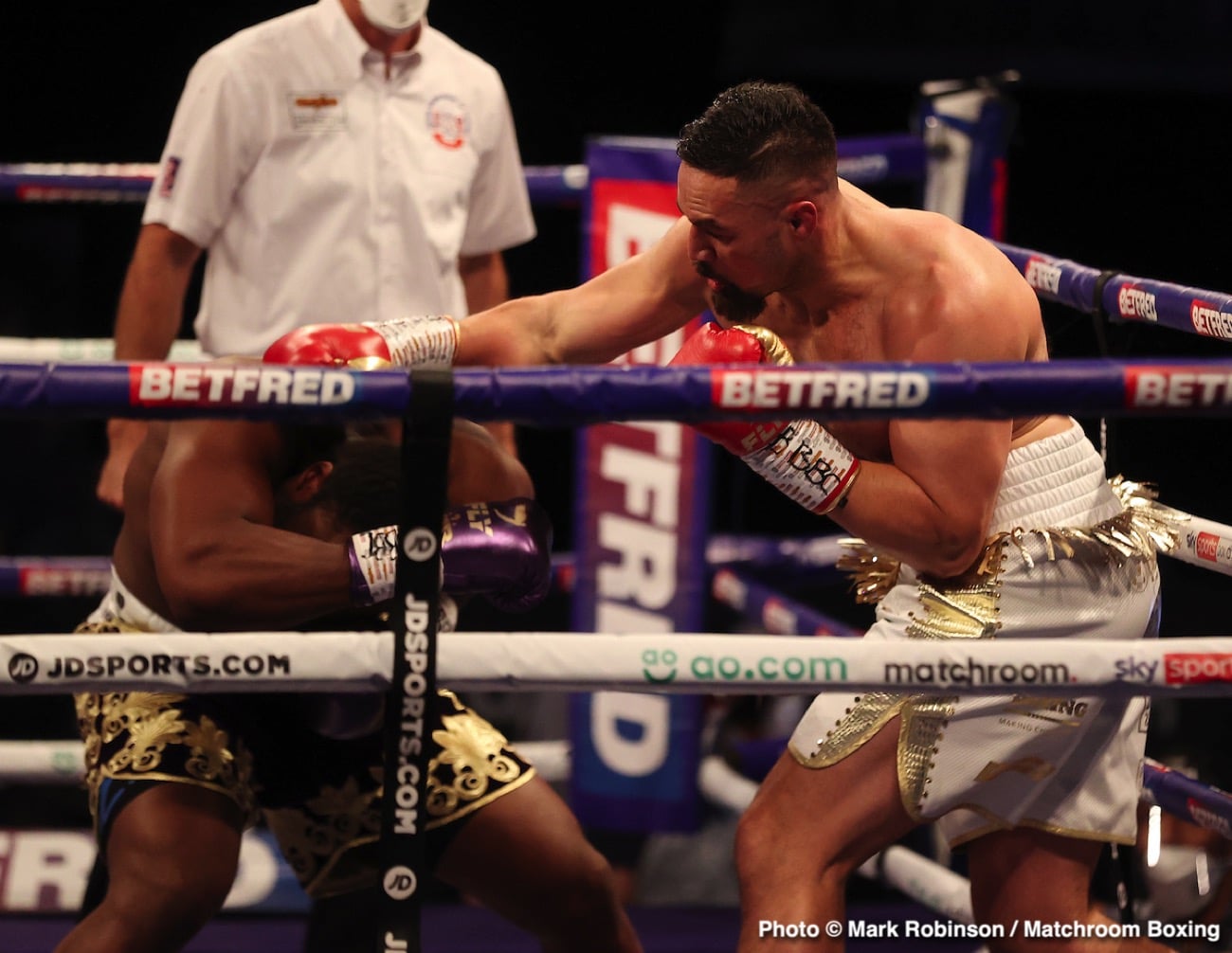 So much for keeping a stiff upper lip, eh? Why couldn’t Chisora take the high road and accept his loss like a good one without bellyaching? It’s not as if he’s going to change anything with his grumbling about his loss.

Eddie Hearn can set up a rematch or put Chisora in with another top heavyweight, but what happens then? It won’t be a pretty picture if Chisora is tossed into the ring with a talent like the 6’7″ Deontay Wilder. You hate to say it, but Chisora would be food for Deontay on the night.

With the poor conditioning that we saw from Chisora last night, he’s only going to fall apart after one round and look like he requires oxygen. Against a good heavyweight, Chisora is going to get blasted out straightaway.

“This is horrible. I train hard every day, I give everything in the gym, and when I put it all in there, these are the results I get,” said Chisora. 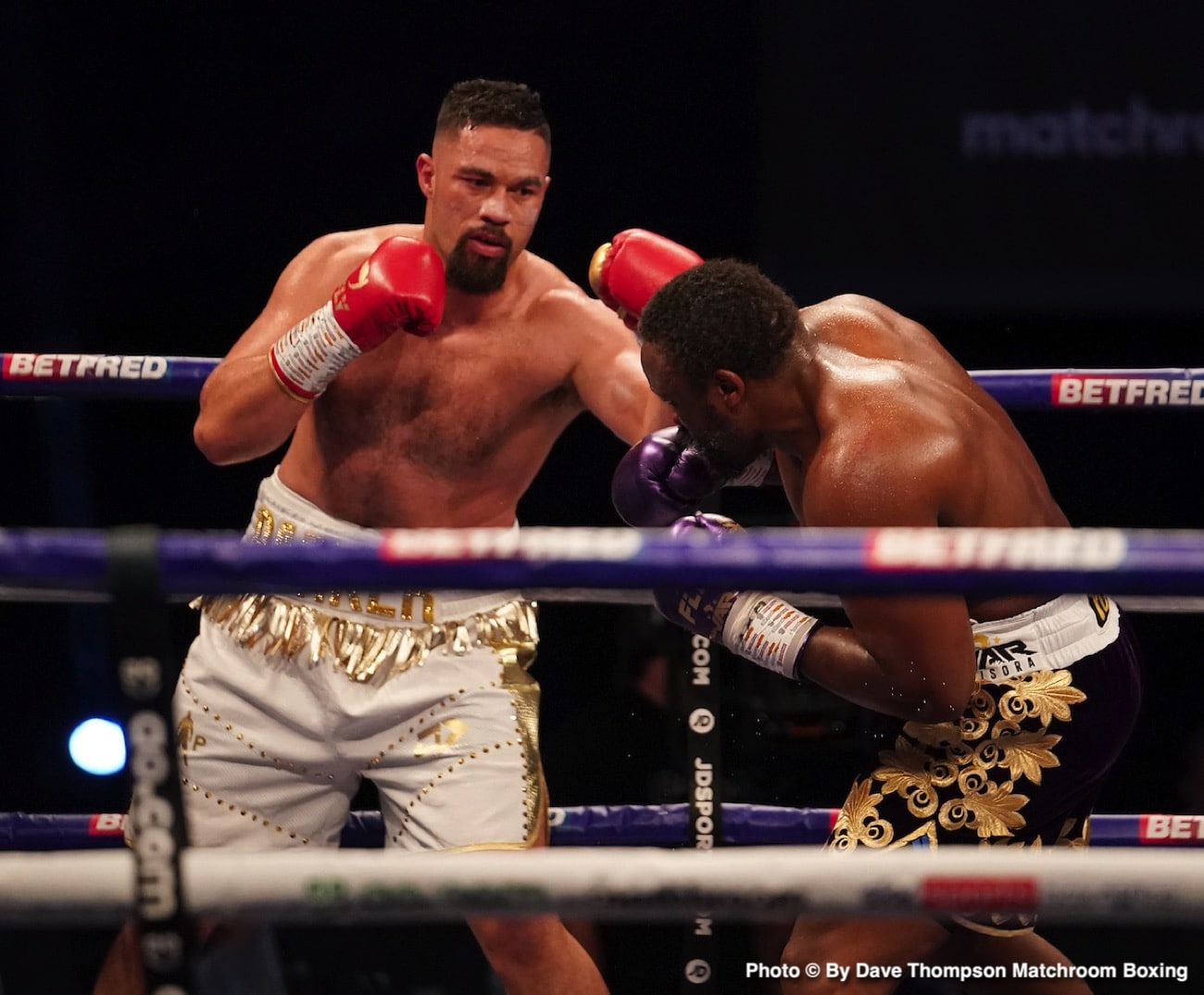 Hearn can do whatever he wants, but he’d be better off NOT making the rematch between Chisora and Parker. I can’t see Chisora winning the rematch, and the fight isn’t going to make him a lot of money.

If Chisora is going to retire, he needs to go out in style by taking on someone like Wilder or Dillian Whyte.

“I thought he won the fight pretty easily,” said David Haye to iFL TV about his belief that Chisora should have won. “I said whatever he could have done in there. I thought he did more than enough to win.

“Two back-to-back fights where he believes and a lot of people believe he did enough. He doesn’t get a break.

“Maybe because he’s older and he’s lost 11 fights now. Whatever the rationale is. When things don’t go successfully, you wind up driving yourself mad,” said Haye.

This wasn’t a robbery by any means. It was simply a case of Parker working harder than Chisora from the fifth round, and winning virtually every round from round 5 through 12.