By Barry Holbrook: Derek Chisora will be making his ring walk first tonight for his fight against Joseph Parker, thanks to his mother persuading him to do this.

Understandably upset, Derek threatened to walk out of the fight on Friday if he didn’t make his ring-walk second.

Chisora (32-10, 23 KOs) was unhappy on Friday when he lost a coin toss to decide which of the two fighters would make their ring-walk second for their headliner fight at the Manchester Arena in Manchester England.

As the star of the show, Chisora felt that he should be the one that was given the spot to walk out second, but it wasn’t written in the contract for him to be given this spot.

Chisora’s unhappiness on Friday may have helped create more buzz about the fight, as there’s been nonstop chatter ever since.

Perhaps it’s what the fight needed because Parker (28-2, 21 KOs) had done little to make the match interesting during the press conferences and interviews. 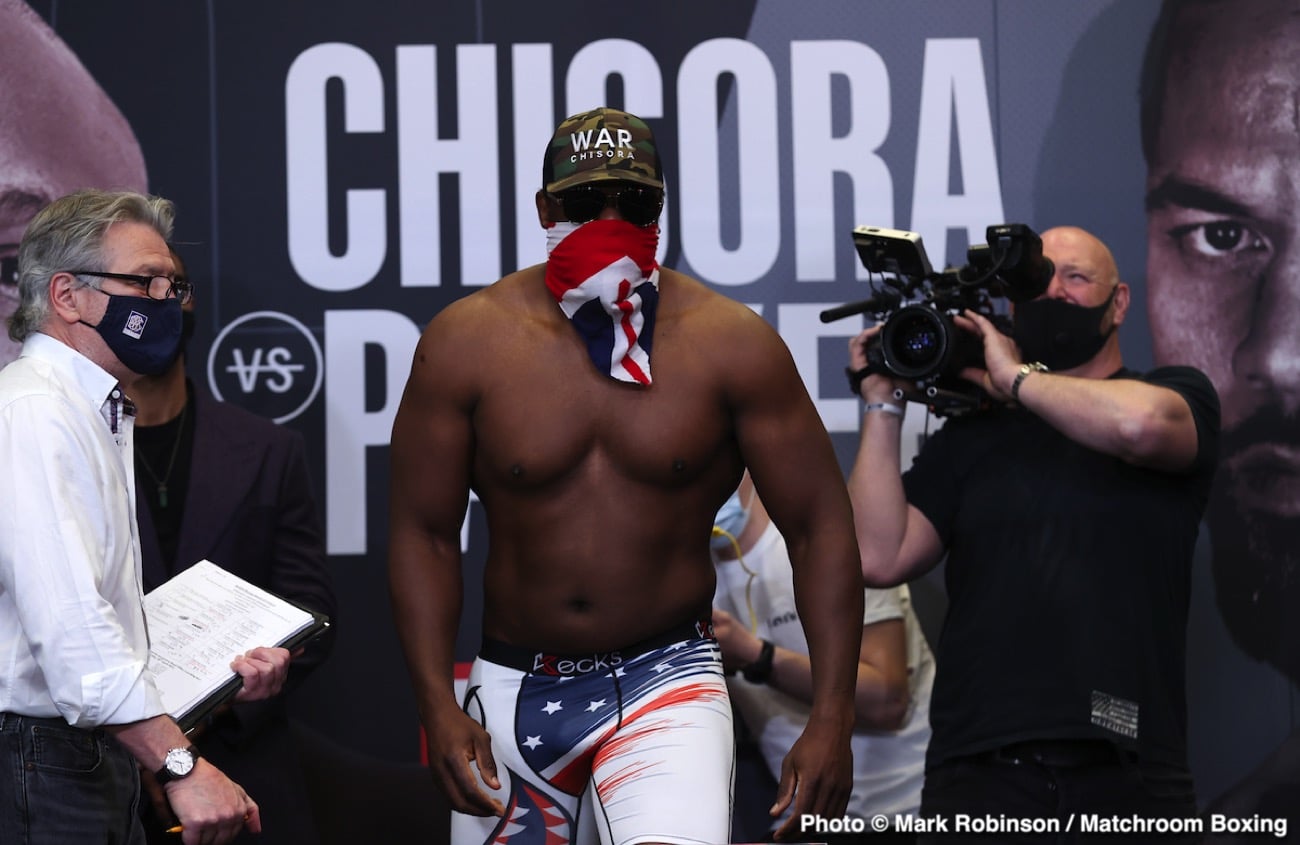 It came down to Chisora to get boxing fans interested in the fight, and he did a great job with the drama over the ring-walk.

“Viola, Derek’s lovely mother, and she’s the only person he listens to,” said Chisora’s manager David Haye to Sky Sports about the match taking place.

“I spoke to Viola, and she said, ‘I told him he’s going to come to the ring first as he promised, and that’s that.’

“We’ve actually had to use Derek’s mother in the past in similar situations where we’re all trying to get Derek to do what we believe is the right thing, and he does not have it. The fight is 100% on, and Derek will be walking to the ring first,” said Haye.

What complicated things were that Chisora and Parker aren’t world champions, which made things difficult to decide which of them would walk out first.

Parker, 29, wouldn’t have been happy to be told to walk out first because he’s a former WBO world champion and is ranked higher than Chisora.

For Parker to be considered for a world title shot in 2022 by the Anthony Joshua vs. Tyson Fury fight winner, he’s going to need a sensational win tonight against the 37-year-old Chisora.

What Parker can’t afford is another lackluster victory like the one he had in his last fight against Junior Fa in February.

If Parker wins in a boring manner, as he did against Fa, the Joshua – Fury winner will likely look in another direction towards a more interesting opponent that will bring in the pay-per-view buys.

Parker already has two strikes against him from his losses to Joshua and Dillian Whyte in 2018, and he’s been taking nothing but tune-up fights since then. Instead of stepping up to redeem himself after those defeats, Parker has played it safe, taking these dull opponents:

Parker has shown very little aggression in those fights, which is perhaps why he’s changed trainers to Andy Lee. It’s a move that Parker believes will change the way he fights, but we’ll have to see if that happens.

If Parker can’t show more enthusiasm to mixing it up against a fighter like Chisora, he may have a long wait for him to get another crack at a world title.

The last thing Joshua or Fury need is a boring opponent that brings nothing to the table, both in and out of the ring.

Chisora has been more of a risk-taker with his career fighting Oleksandr Usyk, Tyson Fury x 2, Vitali Klitschko, David Haye, and Kubrat Pulev. He’s shown more willingness to risk losing than Parker, who has been carefully managed to the point where he’s achieved very little. 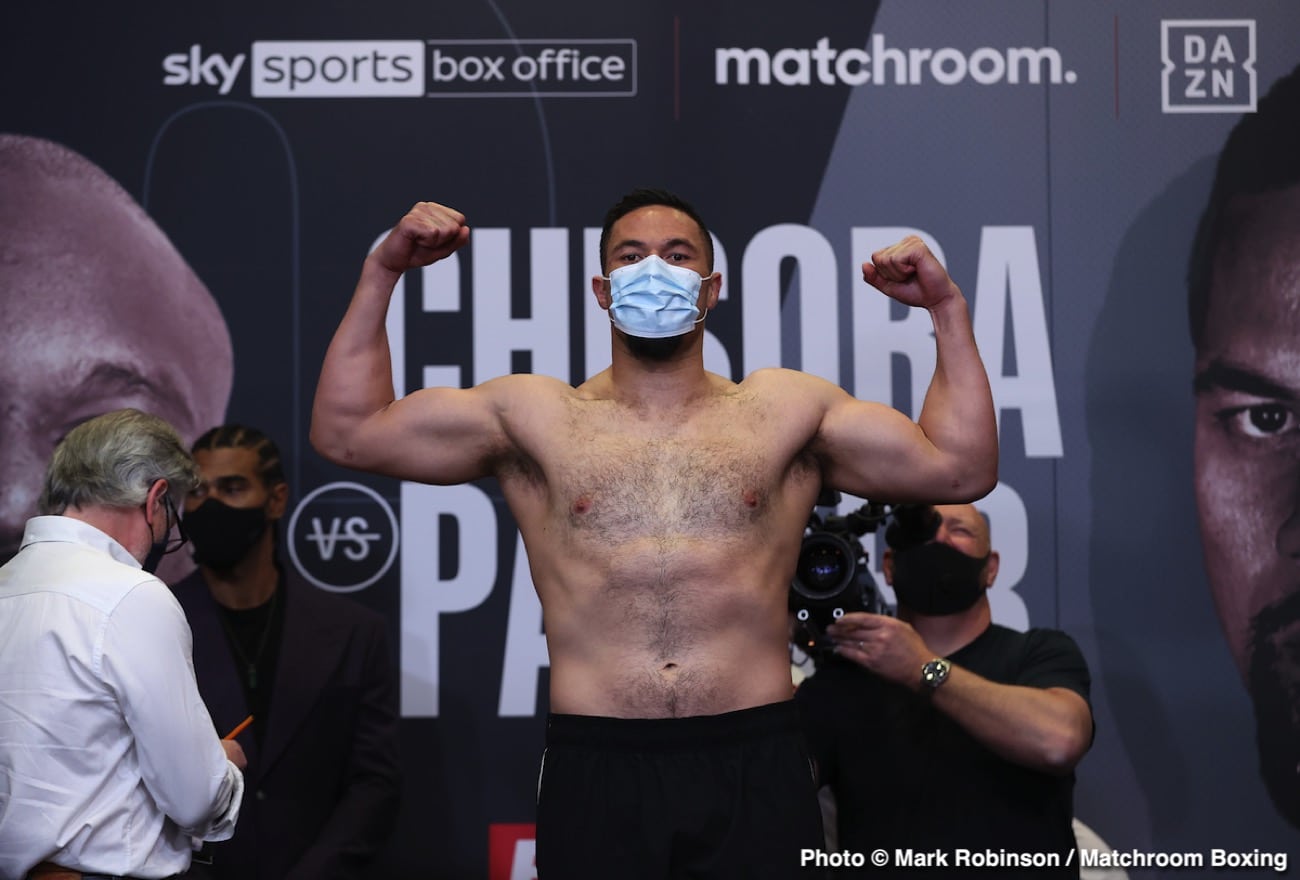 Even when Parker captured the WBO world title in 2016, he won it with a highly controversial 12 round decision over Andy Ruiz Jr in a fight in New Zealand. Many boxing fans saw the victory as a case of Parker being given a hometown decision.