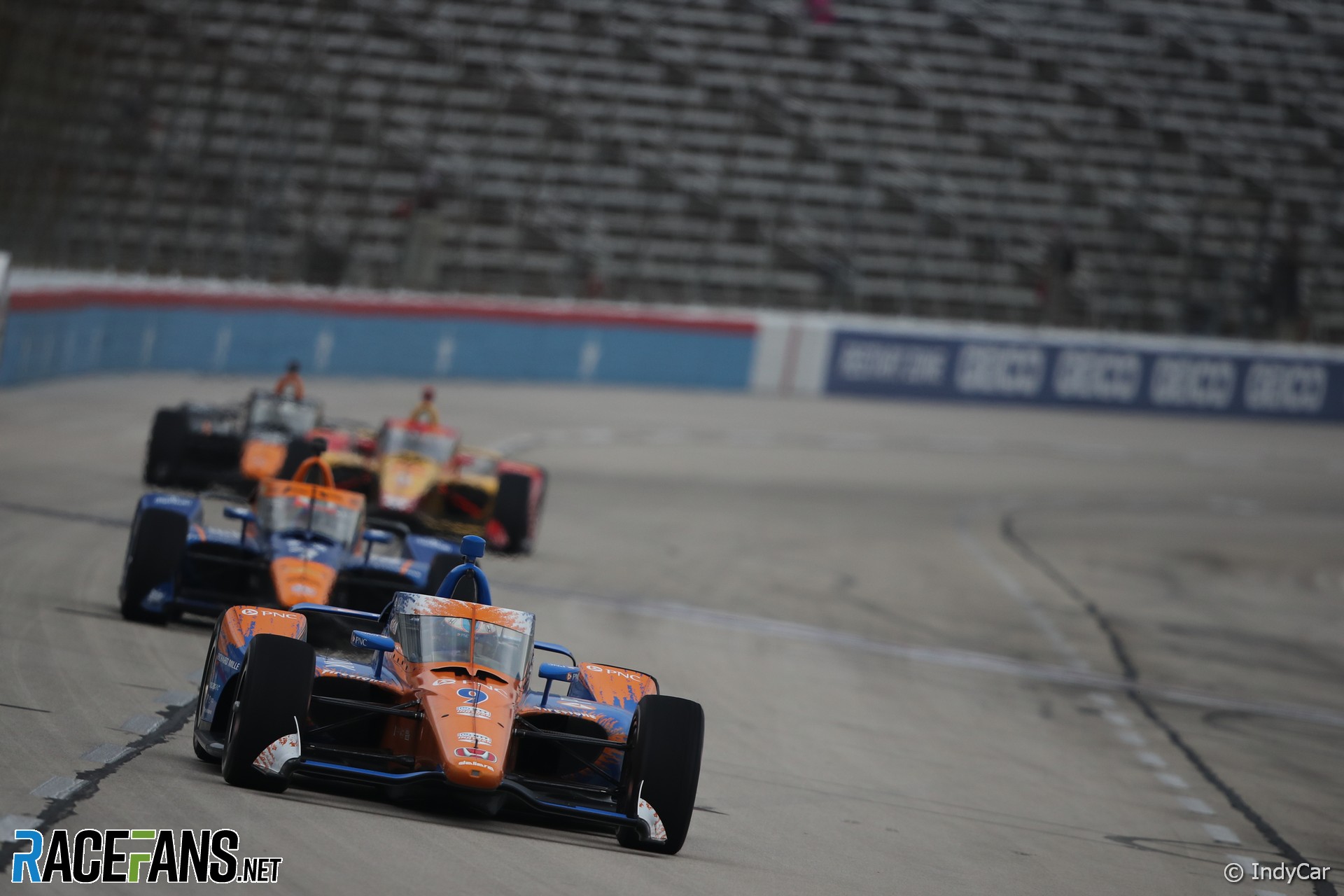 Scott Dixon dominated a largely processional third round of the IndyCar season at Texas Motor Speedway and moved into the championship lead.

The start of the race was brought forward by around half an hour after rain earlier in the day disrupted proceedings at the superspeedway. Despite concerns over further showers in the area, the 212-race ran as scheduled.

The qualifying session had to be called off, however, so the race began with the drivers in championship order. That meant Barber winner Alex Palou led the field around to the green flag, followed by Will Power, Dixon and last weekend’s victor Colton Herta.

Within two laps, Palou’s team mate Dixon had the lead. He took Power at the start and moved past his fellow Ganassi pilot as the third lap began. From there on he controlled proceedings.

Only in the final stages of the race did Dixon’s position look under any serious threat. With 39 laps of running remaining after the final caution period, the leaders were likely to catch traffic in the final laps. Dixon wisely backed off early on to ensure he didn’t catch them too quickly, but as the laps ticked down the stragglers were coming into view and the driver in second place was breathing down his neck.

Dixon crossed the finishing line just two-tenths of a second ahead of his closest pursuer, rookie Scott McLaughlin in his fourth IndyCar start and first oval race. The two New Zealanders embraced in the pits afterwards, the Penske driver having worked his way forward from 15th on the grid to chase Dixon home.

Pato O’Ward made a daringly early second pit stop as he climbed from 11th to third. The McLaren SP driver made good use of his fresh rubber after his lap 113 pit stop to move up the order, and benefitted from the timing of the final caution period on lap 160.

Having taken pole by default, Palou slipped to fourth at the flag. Behind him were Graham Rahal and Josef Newgarden, who both made passes at the final restart, before the Penske driver lost his position to the RLL man.

Nonetheless, Newgarden salvaged a good result after being sent to the back of the field earlier in the race. He triggered the day’s first caution period by tipping a bemused Sebastien Bourdais into the barriers on lap 56, earning his penalty for avoidable contact.

Having started sixth, Jack Harvey stayed up at the sharp end until the final restart, when Newgarden and Rahal pierced his defences. The latter found these were very robust, and though race control ruled Harvey’s firm move on the back straight was legal, Rahal vowed they would “have a man-to-man talk about that” afterwards.

The evening’s other retirements included James Hinchcliffe, who discovered how gripless the wide line was when he understeered onto it as Felix Rosenqvist passed him. Hinchcliffe smacked the wall hard.

Herta was also out of luck. Running well inside the top 10 with 20 laps to go, a right-rear brake failure forced him into the pits and caused a blaze which was quickly extinguished.

Providing the weather continues to co-operate, he and the other 23 drivers shouldn’t have to wait long for another chance to score: The next race at the track will begin in 18 hours’ time.