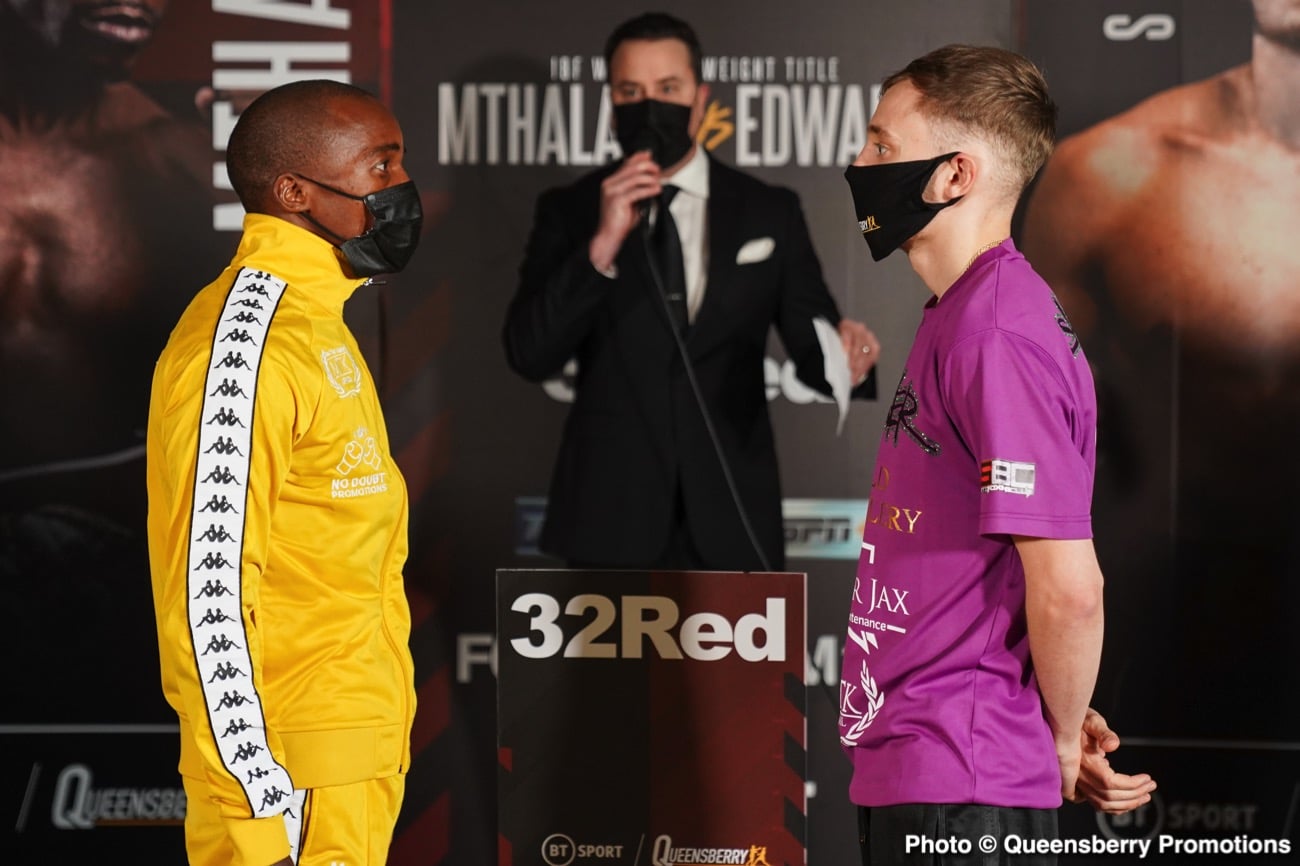 Boxing is back live on BT Sport for a second consecutive week, this time boasting a World Title fight. The action kicks off tomorrow night, live on BT Sport 1 HD at 7pm. US fight fans can watch at 4 p.m. ET/1 p.m. PT LIVE on ESPN+ from London (click here).

SUNNY EDWARDS HAS vowed to make sure 2021 is another big year for the underdogs by following in the 2020 footsteps of Teofimo Lopez, Dillian Whyte and Jeison Rosario by shocking the boxing world when he takes on IBF Flyweight World Champion Moruti Mthalane.

Last year saw the bookies – along with a good few pundits – rocked by a series of high profile fistic upsets, and 2021 has started in a similar fashion with Mauricio Lara and Lennox Clarke recording stunning victories over higher ranked opponents.

Upsetting the odds is what Edwards will need to do if he wants to take possession of the IBF belt held by the battle-hardened champion on April 30, live on BT Sport.

This particular betting underdog is a dedicated lover of our canine friends and will need to summon up the bulldog spirit of his beloved hounds against the 39-2 ruler of the division, with 26 KOs to his name.

Edwards is the proud owner of two American Bullys – Duchess and Kilo – who he insists are not quite as fierce as they look. He knows it is up to him to prove once more that underdogs can snap and bite with the best of the pedigree champions.

“I am pretty happy to be considered the underdog,” confirmed the 25-year-old. “They have been on a great run recently and especially since boxing went behind closed doors.

“It is a trend I am confident of continuing and when I get the belt it will be in safe keeping with Kilo and Duchess protecting the crown jewels! I might have to ask the IBF about sanctioning some world champion dog collars if it all goes my way.

“And I know my dogs look quite mean, but they are big teddy bears!”

Edwards goes into battle admitting that he might be minus the supposed menaces of his four-legged family and will need to assess what he is up against in the opening couple of rounds.

“I think I will have to move around and have a look for the whole 12 rounds, to be honest. You don’t go head on against an immovable object, I’ve got to try and work around it for as long as I can.

Edwards is both familiar and friendly with the 38-year-old, known as ‘Babyface’, since spending time together over in Ukraine at a training camp.

“It is a friendly one since we were together in Ukraine and we have got each other on social media, so it has always been a ‘good luck’ or ‘well done’ before and after fights. He is top of the division, top of the tree and he is where everybody else wants to be.

“He is heavily avoided, we know that. I think he’s had like 10 world title fights and nobody has ever given him a unification shot. He has proved time and time again he will be the away fighter, even as a world champion.

“I think you have to understand the beast I am getting in the ring with, to be honest. I do.

“When I got out of the ring in Ukraine he said I would 100 per cent be a world champion, when I asked him for a picture. Hopefully that 100 per cent will be on April 30 and against him, but he is such a nice man and a great champion.

“I do genuinely feel honoured to be sharing a ring with him, but all the friendliness will fall by the wayside when that first bell goes. I just need to win and having that world title would mean the absolute world to me and it would put me up there with the top British fighters right now.”